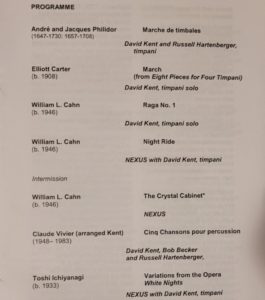 AN ALL-TIMPANI PROGRAM    In early March 2011, we participated in two exciting programs. David Kent (timpanist with the Toronto Symphony) joined us a guest artist in an unusual program of timpani works. Together, we premiered Bill Cahn’s new piece “Night Ride” and played his Raga No. 1. Along with the Philidor “Marche de timbales”, Elliott Carter’s “March”, Ichiyanagi’s “Variations from the opera White Nights” and a new trio arrangement of Claude Vivier’s “Cinq Chansons pour Percussion”, a piece created for David before Vivier’s murder in Paris at the age of 34. The piece marries the sounds of the South Pacific with that of Western music.  It brought great audience feedback: “absolutely stunning” and “total exhilaration” were 2 comments, while the Toronto Star review called it “a concert bristling with invention”. David was entering his 30th anniversary of playing, and we were celebrating our 40th. As he said, over the years he had either studied with us, played with us, or studied the music we’d written, and he graciously offered that “If it weren’t for Nexus, I and many other drummers would still be tapping out ‘How Much is that Doggie in the Window’ on a snare drum.” 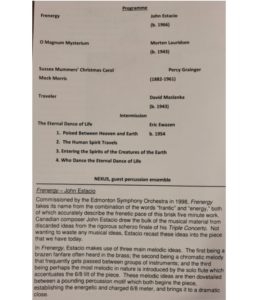 The other great program was at the Barrie Concert Series where we joined the University of Toronto Wind Ensemble conducted by Gillian MacKay. You’ll see it attached. The concert ended with Ewazen’s “Eternal Dance of Life”. The Ensemble had given the piece its Canadian premiere with us in 2009, and immediately upon hearing it, arts entrepreneur and friend Bruce Owen had booked it for this concert series, saying, “How fabulous that performance was! — I would hate to have this piece neglected or forgotten!” 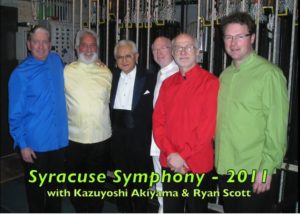 “A SONIC FEAST”   With Maestro Kazuyoshi Akiyama and percussionist Ryan Scott we performed “From me flows what you call Time” wit the Syracuse Symphony in New York. The headline next day: “NEXUS spun us into breathlessness!” We had performed the piece there back in ’02. The warm review then called this wonderful piece “the sort of experience that confirms why we care about music in the first place. It confirms what it means to be human.” High praise indeed. Of special import this time was that the orchestra had hit a rough patch, and there were fears it would have to close. They kicked off a Keep The Music Playing campaign, and in 10 days had received almost 1400 donations and $500,000! Their fundraisers had been imaginative: an instrument petting zoo for little concert goers, pubs, clubs, and even tattoo parlours had gotten into the act! 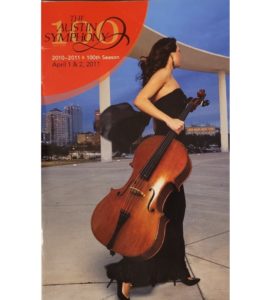 Next up, we five performed it with Maestro Peter Bay and the Austin Symphony in Texas. Reviewer Luke Quinton called it “a sonic feast” and said “the sheer arsenal” of instruments “made the stage look like some medieval Asian marketplace…The use of steel drums as a strange centerpiece was striking, but the most stunning moments came from the clanging of a gigantic nippled gong, whose long wavelength oscillated in thick waves.” Bill Cahn and Maestro Bay exchanged really interesting emails about the Takemitsu work, the poem the title was taken from, the tempo of various performances, and what the titles of the sections in the score refer to. You can read them HERE. 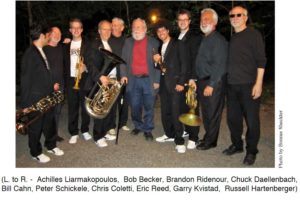 FANFARES AND FUN     As part of our 40th season and the 20th anniversary of “Woodstock Beat” in New York hosted by Garry Kvistad, we joined forces with the CANADIAN BRASS in an Independence Day weekend performance in that wonderful and historic Maverick Hall. The concert was titled “Stars and Stripes” and featured the material that had been arranged by Robin Engelman and Howard Cable for the 2010 CD, “Stars and Stripes: Canadian Brass Salute America”. The recording had showcased members of NEXUS with the ‘Brass’, and for weeks it had been on the Billboard Classical Chart peaking at Number Two. Now, in July 2011, fans had put it back on the Chart at number eleven! Among the highlights in our Woodstock concert were Bill Cahn’s arrangement of Copland’s “Fanfare for the Common Man” followed by Peter Schickele (a.k.a. “P.D.Q. Bach”) personally introducing his own “Fanfare for the Common Cold.” 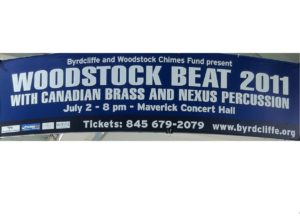 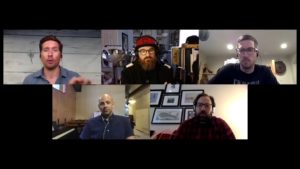 DRUMMING WITH TORQ     Ottawa’s International ChamberFest invited us to celebrate our 40th with them in two back-to-back concerts in beautiful St. Brigid’s Centre. In the 1st, we presented a survey of NEXUS’ best including Reich’s “Mallet Quartet”. In the 2nd “late-night lounge” concert, Toronto’s TorQ joined us for Reich’s “Drumming”. Check out Josh Quillen’s great conversation with TorQ on the new DRUMMINGat50 website, where they discuss encountering, learning, performing and teaching this irreplaceable work.