As I write this, NEXUS is in Austin Texas to perform with the Austin Symphony conducted by the orchestra’s music director, Peter Bay, who has been with the orchestra for 15-years.  Prior to Peter’s coming to Austin, I had the pleasure of performing in many concerts under his baton at the Rochester Philharmonic, where he was the assistant conductor for a decade.  In 1994 Peter conducted the Rochester Philharmonic and NEXUS on the orchestra’s classical series in performances of John Wyre’s “Connexus,” which was also recorded in the same week along with my pieces, “Kebjar-Bali” and “Voices” for the NEXUS-label CD, “VOICES.” 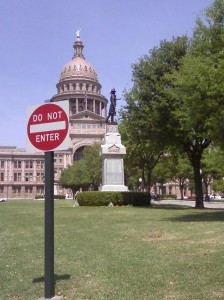 In Austin this week, NEXUS is peforming in two concerts featuring Toru Takemitsu’s “From me flows what you call Time.”  This is the 40th anniversary season of NEXUS and it coincides with the 80th year after Takemitsu’s birth.  As part of this celebratory year, NEXUS has given performances of “From me flows . . .” with orchestras in the U.S.A. and Japan (see the earlier blog postings from Hyogo, Japan).  In Hyogo NEXUS was visited by Asaka and Maki Takemitsu, Toru’s wife and daughter, whom we hadn’t seen since prior to Toru’s passing in 1996.

Peter Bay is an avid collector of recordings and he has an insatiable taste for non-standard orchestral repertoire – the vast storehouse of music, much of which is truly worthy of being heard, but which has not made it through the tipping point of widespread visibility in the classical music world.  Right from the premiere of “From me flows . . .” at Carnegie Hall in 1990, Peter has been following the NEXUS performances of the piece.  He even received one of the CD copies released by the BBC after the NEXUS performances at Royal Albert Hall in 1993.  So this week’s performances mark the culmination of a very long-standing interest.

In the days preceding our travel to Austin there were several email exchanges between Peter and myself on issues and concepts related to “From me flows . . .”  These exchanges opened with a simple question.

Peter’s Question : Is there an English translation to the Makoto Ooka poem “Clear Blue Water” from which Takemitsu got his inspiration?

in our bellies, sausages

eaten on the Zermatt terrace,

foot of the Matterhorn,

As we climb up and up

the Furka Pass, my eyes

by a billion particles

across the valley a giant

Swinging up its snow-

Down from that colossal

Q : Takemitsu basically used the title as a launching point for the work without trying to link the poem to the content of the piece.  But for other composers somehow the poem and the music do have some connection. It does seem that in this case Ooka’s poem has nothing to do with the music.

R : The poem is probably not directly related to the music at all – except for the line that inspired the title of Takemitsu’s piece.  It might also be helpful to know that (as I was told by my cosmopolitan Japanese friends) the Japanese language is closer to poetry than the English language.  In the Japanes language (as in poetry) words can carry a lot of non-specific meaning, and are open to more than one interpretation until a context is firmly established, whereas in English, words (and phrases) are generally very specific. I was told that if two Japanese friends should meet on the sidewalk and begin a conversation, it could be some while before they both agree on what the are talking about. So perhaps – and I’m really only making an educated guess here – this openness of language and connections could help to explain the openness of the connections – Carnegie Hall, five, windhorse, Tibetans, color, time.

Q : What Do the titles in the score refer to.

R : The internal (section) titles probably refer to the culture and lives of the Tibetan nomads (perhaps, metaphorically representing the ‘life’ of Carnegie Hall).  There are lots of levels of ideas and connections going on in this piece – some of them:

1) the number ‘5’ : Five members of NEXUS, five-note theme, 5 colors of the Tibetan universe

3) colors – The colors, of Tibetan universe – red, green, blue, yellow, white – are depicted in the Tibetan “windhorse” (5-color flags), the same five colors of ribbons flowing from stage to the windchimes and the five colors of shirts worn by the percussionists become, in effect, a kind of musical windhorse. Tibetan nomads use the windhorse (flags) to point in the direction of their future life; symbolically, the 5-color ribbons sound the windchimes, as the sounds disappear into the future (of Carnegie Hall or wherever the piece is performed).  For me, these final moments in the piece are really magical and unique in the whole of the orchestral repertoire. The experience of listening to the chimes decay, is directly comparable to a technique used by Buddhist monks when they strike a long-sounding bell and consciously follow the sound’s decay into silence, at which point, if done attentively, ‘nowness’ becomes revealed – the listener becomes immersed in ‘now.’  Our experience in NEXUS is that (rather than making audiences uncomfortable) the long-sounding decay of the wind chimes at the end of Takemitsu’s piece is totally embraced by audiences.

4) In a profound way, the windchimes sounding at the end of the piece are the hall (Carnegie Hall or any concert hall) itself speaking, as the orchestra is silent. (except for the double-bases whose long tones disappear just before the final few wind chime sounds). Symbolically, it’s the hall itself announcing “From me flows . . .”

Q : Some of the tempi in the recordings are far slower than Takemitsu’s approximate metronome suggestions.

Regarding tempi, it does seem that over many NEXUS performances the piece has lengthened and is now sometimes played at slower tempi than Takemitsu indicated.  This evolution, while not part of a conscious plan, is in sync with Takemitsu’s conversations with NEXUS about sound and silence – allowing sounds to have their full space. That being said, the conductor’s influence is considerable and NEXUS is open to trying new ideas, especially if the conductor feels strongly about them.