This morning I woke up at 5 AM again and couldn’t go back to sleep. so I turned on the TV to see if I could find anything interesting and while surfing through all if the channels I booted up my laptop and spent over an hour writing the previous blog posting.  While I was typing I noticed a program on the TV news in which there were two commentators discussing an old poster from the early 1940s.  It was an American poster printed during World War II advertising U.S. war bonds, and after a few minutes it occurred to me that December 7 is Pearl Harbor Day.  The poster had some harsh language directed at Japan, and given the fact that most Japanese alive today were born after the war, it must have seemed to the commentators to be quite nasty.

Today is a free day on my official schedule, so I arranged a lunch meeting in Yokohama with Kaz, Yashio, Yurika Kumira and Akiko Goto.   Kaz would be picking me up at the hotel at 11:30 AM – still four hours away.   After finishing the blog posting I googled some very interesting information about the history of the xylophone in Japan and about the Japanese xylophonist, Yoichi Hiraoka, who was to be the subject of the lunch meeting,

My interest in Hiraoka began years ago when I was doing research for my book on the history of the Rochester Philharmonic Orchestra (“Rochester’s Orchestra and Its Educational Programming – 1922 to 1989”).  That was when I came across and article from 1939 in the “Civic Music News” announcing a performance by Hiraoka with the orchestra.  I later learned that Hiraoka’s performance in Rochester had some influence on the orchestra’s timpanist, William G. Street, who was my teacher at the Eastman School for three years from 1964/65 to 1966/67.  After admiring Hiraoka’s stroke and sound on the xylophone, Street began to incorporate a ‘lift’ stroke into his own teaching at Eastman.  In a very real way I am closing a long pedagogical circle by bringing Street’s influence on me back to students in Japan. 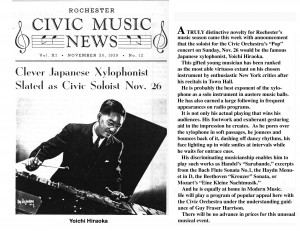 Kaz and Yashio arrived at the hotel right on time and we drove for about an hour to Yokohama, where we met Yurika and Akiko at the JR Kannai Station.  Kaz then drove the five of us to Chinatown and the same Chinese restaurant (Yashio’s favorite) which we had visited in years past.

It turns out that I had Met Akiko a long time ago when she was at  the University of North Texas and I was there on a mini-residency, but of course, I didn’t remember.  Both she and Yurika had also been at the recent PASIC in Indianapolis, but we hadn’t crossed paths.  Unexpectedly and surprisingly Yashio and Akiko had known each other since their school days, and Akiko had only recently moved back to Japan, so they hadn’t seen each other in a very long time.

While at North Texas Akiko had spent  6-years researching and writing her thesis on Hiraoka, and the final 300-page book version had just been published in Japanese.  (An English version is now in the works.)  One  photo in the book (from the early 1940s?) which I had never seen before shows a gathering of all of the NBC staff xylophonists, including George Green, Sammy Herman, Harry Breuer and others – amazing!  Of course, beginning in 1930 Hiraoka had also performed on numerous NBC radio broadcasts as a contracted soloist.

Akiko presented me with a gift copy of Hiraoka’s Xylophone Method, and a photocopy of the book’s appendix in English, which included a chronology of Hiraoka’s life (1907 to 1981), a listing of 100 pieces in Hiraoka;s repertoire, a list of Hiraoka’s performances of “Fantasy on Japanese Woodprints”  by Hovaness, a listing (with photos) of Hiraoka’s instruments and mallets, and a bibliography – very impressive!  And the Chinese food, as in my past visits, was excellent too. 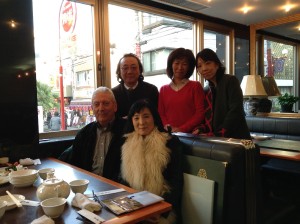 After lunch we dropped off Yurika and Akiko back at the JR Station and then drove to my hotel, arriving around 4:30.  I went out to buy some groceries for dinner and tomorrow’s breakfast. and watched TV back in my hotel room.  Interestingly, a recent big-budget Japanese movie titled, “Yamamoto,” was just beginning, and even though it was entirely in Japanese, I watched the whole thing – the story of a battleship and its ultimate destruction during WW II – another reminder that it was Pearl Harbor Day today.

This was another scheduled free day, and I slept until 6 AM – making more progress against jetlag.  The morning and afternoon were free, but though it was mild and sunny outside, instead of  going out to do some sightseeing, I spent the time writing on my laptop, working on an essay about the future of orchestral percussion for future publication at the request of Russell Hartenberger.

At 5 PM I walked over to the il Campiello restaurant on the Showa campus for a wine and buffet reunion party planned by Kaz for former students who are now graduated and out in the work force.  Most of them were teaching in grade schools, or working in various office jobs, with music performance as a secondary pursuit,  About 25 former percussion students attended, including Ritsuko, Tomomi, Ayaka, Erika, Shiyono, Asami, Rena, Ko, Naoki, Mayumi with her 3-month-old baby boy, and others whose names I mostly remembered.  Some of them had traveled over two hours to be there and I noticed that as they arrived each one dipped into their purses to pay for a share of the cost in advance.  Naturally, for them the reunion was as much about reconnecting with their former classmates as it was about seeing me, and everyone there seemed to be having a good time.   I did have the opportunity to spend a little time with many of them individually to learn about what was going on in their lives.

The event came to a close around 9:30 PM after the obligatory round of photos for everyone. As I left the restaurant I remembered the party that took place 2-years ago at the end of my visit in 2011.  As I left the party on that occasion, I recall thinking that it  was very likely that I’d never see any of them again, but of course, this year’s visit temporarily extended that possibility.  Still, that thought looms large this time too.

The weather was still mild though maybe a bit chillier this morning.  I walked over to Showa a little early at 9:30 for some coffee from the school’s concession shop before the first 10 AM lesson.  The repertoire today was:

– INTO THE AIR by Ivan Trevino (Marimba duo)

Noriko and Yurie gave a solid performance of Ivan Travino’s piece in their lesson, and I was able to videorecord it.  Of course, I know Ivan very well.  He was a student at Eastman in 2006 when I taught full-time for the fall semester during John Beck’s sabbatical leave.  I have since then watched Ivan’s musical, educational and compositional paths unfold.  His compositions are already well on their way to becoming standards in the percussion world. 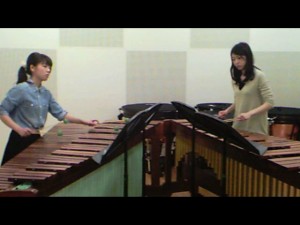 Yurie and Noriko performing “Into the Air” by Ivan Trevino

The Jager Concerto was composed in 1985 and I was amazed that I had never heard it before. It was played in the lesson by Koichiro, who had completely memorized it after only 2-weeks in order to perform it with the wind ensemble in a few days.  The piece has lots of problems that have to be solved, including having the proper sticks for quick changes between instruments – timpani to vibes to glock, back to timpani, then to xylophone, etc. – and the proper placement of stick trays and precise arrangement of sticks and mallets in advance.  Koichiro solved these problems and others very well.  One remaining problem was a rapid change from snare drum sticks to a bass drum mallet and then rapidly back to snare drum sticks.  In two successive run-throughs, picking up the bass drum beater from a stick tray and then replacing it caused the return to snare drum sticks to be too late for the very tight move to toms.  After a few experiments the best solution turned out to be picking up the bass drum beater during an earlier rest, placing and holding it under one arm until needed, and then using it and quickly replacing it under the arm again until the next big rest, at which time it could be returned to the stick tray.

After school, the bakery shop in the nearby Shin-Yuri train station provided me with a slice of pizza and a blueberry pastry for dinner, which was just enough because I had a large hot lunch (ground beef burger on rice with salad) earlier in the Showa cafeteria.  Then I watched a Japanese girls curling tournament (about stones on ice, not hair styling) on TV – who would’ve thought?