The 2010/2011 concert season marks the 40th anniversary of NEXUS, and the season begins at the Hyogo Performing Arts Center near Osaka, Japan with three concerts, all of which have been sold-out for weeks in advance.  The concerts feature Toru Takemitsu’s “From me flows what you call Time” with the Hyogo Arts Center Orchestra, conducted by Yutaka Sado.  For these performances NEXUS is joined by Canadian percussionist, Ryan Scott.

The Concerts commemorate the 80th anniversary of the birth of Takemitsu (1930-1996), who was a cherished friend and mentor to NEXUS. “From me flows what you call Time” was composed in 1990 for Carnegie Hall, NEXUS and the Boston Symphony Orchestra, and since its premiere NEXUS has regularly performed it with major symphony orchestras worldwide.

I arrived in Osaka on September 4 – a few days before the first rehearsal – and I’m staying at the Hankyu Hotel along with Russell and Bonnie, Garry and Diane, and Ryan Scott.  Bob is at the Novotel Koushien which is closer to the Performing Arts Center.    I was met at the airport by a limousine and the drive through the industrial waterfront into the city to the hotel took about an hour.  The weather was balmy in the high-90s (F), which is unusually high for this time of year.   I was met at the hotel by Kazu Tsuchihashi, who is with the Hyogo Performing Arts Center.  Kazu lives for half of the year in Los Angeles and he speaks perfect American English.  My room is on the 26th floor and I’ve got an unobstructed view of the city. 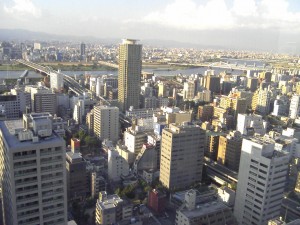 I went to sleep early on the first night due to jetlag (as normally happens after a trans-Pacific flight) and at 4:30 AM I was wide awake.  It was September 5 and I decided to work on emails.  At 8 AM Russell called and we all went to a nearby Starbuck’s in a shopping mall adjacent to the hotel for a wake-up coffee.  The weather outside appeared to still be very heavy – upper 90s – and I realized that we would all probably need to have regular doses of water.  At Starbuck’s Russell, Garry and I decided to spend the day sight seeing in Nara, a city famous for its Todaiji Temple with its awesome giant Buddha (“Daibutsu”) and a surrounding park and gardens populated by thousands of deer that are considered sacred and that are very assertive with tourists.  Of course, the deer are after the crackers sold by vendors to tourists throughout the park, especially to feed the deer.  This site was the inspration for a solo percussion piece I composed in the 1970s titled, “Nara.”  (The piece is performed by Russell on the NEXUS CD “The Solo Percussionist.”

So, our free-day began with a walk of about a half-mile to the JR train station and we made the  1-hour train ride to Nara.  It was way too hot to do much walking, so from the Nara station we took a taxi to the Todaiji Temple.  After a drive of about 2-miles we came to park and saw the deer everywhere, but the scenery was unlike anything I could remember from our first visit in 1976.  (Russell said the same thing.)  We agreed that the deer park had been greatly expanded and that the temple itself had a number of additions since our last visit.  There were lots of tourists and tour bus groups, all of whom were well outnumbered by the deer.  Russell bought some deer crackers and as he was feeding several of them, one grabbed his tourist map and started eating it.  Bonnie grabbed the back side of the map and tore it away from the deer, but it was already half eaten.  We joked that now we would only be able to tour the southern part of Nara. After about an hour at the temple, we took a short taxi ride for a Japanese lunch at the Nara Hotel where Ruth and I had a wonderful corn soup in 1976  (I still remember it!).  The Hotel has been well cared for, with additional buildings and it has retained its elegance.  As soon as we finished our lunch we heard thunder, and it was just dumb luck that we had lingered at the Hotel, because if we had walked outside into the nearby old town, we would have been stuck in a drenching downpour.  We decided to take a taxi back to Nara Station for the train ride back to Osaka.

Just as we got back to our hotel lobby, Ryan Scott arrived after his flight from San Francisco, and at 7 PM we all went to a nearby underground sushi restaurant (very good!) to bring a very nice day to an end.