As I write this, I’m listening to “The Messiah” being discussed on Japanese television while it’s performed by a Japanese chorus, Japanese vocal soloists, and Japanese musicians playing on period instruments, including timpani (with wooden mallets) that are very much like the hand-tuned drums I saw earlier today (more about the hand-tuned timps in a minute).     Twenty-first Century Buddhist and Shinto Asian musicians playing 18th century German/English Christian music on 18th century instruments.   What a world!

I used my one day off in Japan (Sunday) to go with my host, Professor Kazunori (Kaz) Meguro, to see Mr. Tomoyuki Okada (the retired percussionist of the NHK Symphony, President of the Japan Percussion Society, Professor Emeritus of the Senzoku Gakuen College of Music, and Kaz’s teacher) at Okada’s home in Setagaya, about an hour’s drive from my hotel in Yokohama, where I’m spending two nights. Okada is 74-years old, but he looks at least 15-years younger, and he is totally lucid and very enthusiastic about Kaz’s and my idea of documenting the history of (Western) orchestral. percussion in Japan. Incredibly, no such history exists yet. As I read my questions to Okada, he nodded approvingly. 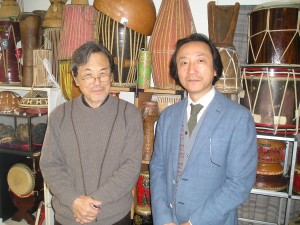 It seems (from what I could pick up in translation) that one genesis influence came from Sautaro Komori, who was the (first?) timpanist with the NHK Symphony Orchestra.  Komori’s learning apparently was from a military band background – perhaps from hearing foreign bands that were permitted into Japan in the Meiji era with the opening up of Japan, or from the Japanese Navy band before W.W.II, and maybe also from American occupying bands after W.W.II. (as with Takemitsu).  Komori also wrote a comprehensive percussion instruction book in 1932 (maybe the first such book published in Japan) encompassing timpani, snare and bass drum, triangle, tambourine, and xylophone.

Fortunately, Mr. Okada has a copy of the Komori book and he allowed me to take several photos.  Kaz and I were totally surprised to discover that the book included the American Camp Duty (3 Camps, Breakfast Call, etc.), along with Japanese military bugle & drum signals, as well as orchestral. repertoire excerpts for each of the instruments, a language diagram for French/English/Italian/German percussion equivalent terms, several full xylophone solos (“Wood and Straw Galop,” “Carnival of Venice,” etc.) – all very comprehensive and not unlike the Bower or Gardner books, but even more encompassing.

The book includes one page showing Komori playing four timpani (2 rotocrank and 2 hand-tuned, arranged in the English/American position – small timp. to the right side). Interestingly, however, the Japanese text (according to Okada) indicates that the large drum should be arranged to the right.  Incredibly, Okada actually possessed – sitting on tripods right in his basement – the 2 hand-tuned timps in the Komori photo from the book. The drums appeared to be very old (perhaps 150-years old or more) and German-made, with calf heads about 23 and 25-inches (estimated) in diameter.  I can only imagine how much more modest the sound would have been than we’re used to today, especially in the low registers.  My guess is (maybe we’ll know better when more planned research is done) that the original influences on orchestras and timpani in Japan (as in America) came from Germany.

I want to be absolutely sure that I haven’t lost anything in translation, so next Thursday I will video-record an interview with Kaz and Ms. Iishi, the translator at the Showa Academy of Music, who can give a more accurate and nuanced translation.

There is also much room for research into the history of keyboard percussion (especially xylophone and marimba) in Japan.  It appears that Yoichi Hiraoka was a genesis influence.  Hiraoka (self-taught I’ve been informed) toured in the U.S. before W.W.II and even gave a concert in the Eastman Theatre with the Rochester Civic Orchestra in 1940.  (I’ve got a photocopy of the programme.)  I’ve been told that Hiraoka’s playing technique (with a pronounced upstroke) had some influence on William Street, the percussion professor at Eastman who performed in the Civic Orchestra on that 1940 program.  Street was Bob Becker’s and my teacher, and now here I am teaching students in Japan.  What goes around comes around.  It’s so easy to forget or ignore the interconnectedness of ideas and cultures.  It only takes one generation (maybe even less!).  It’s my hope that the research that is now underway into the history of  Western percussion in Japan and into the influences that brought this about will have some resonance, not only in Japan but throughout the percussion world.