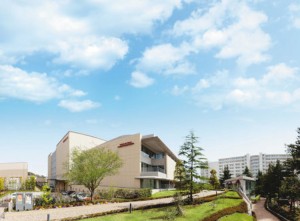 The Showa campus in Kawasaki

Since 1998 I have had the privilege of regularly visiting the Showa University of Music and Arts, first at the original campus in Atsugi, Japan, and then from 2007 at the beautiful new campus in Kawasaki.  This is my 12th visit at the invitation of Kazunori Meguro and his wife, Yashio Sudo.  Both are professors of percussion at Showa.  At each successive visit I have observed an increase in the levels of performance by their  students, and this has been particularly rewarding.

I awakened to a 6:00 AM alarm clock at home to get ready for  the day-long trip.  I had already packed my two carryon bags with clothing, gifts, and just one pair each of snare drum sticks and yarn mallets. Ruth and I left home at 7:30 and Ruth drove me to the Rochester Airport for a 10 AM flight.

The first flight to Washington-Dulles was right on time, which helped me make a very tight connection. There was barely enough time to get out of the prop plane from Rochester, fast walk about a quarter-mile, board an inter-terminal train, and then fast-walk another half-mile (uphill at the end, of course), to get to the Tokyo-bound plane at just about the farthest gate from my arrival gate. (I sometimes wonder if the airlines’  computers are programmed to make passengers run as far as possible in the shortest amount of time.)  Fortunately, I boarded the plane literally a minute before the doors were sealed.  I immediately noticed that the new United business class seats had shrunk about 6-inches, and that they were arranged more densely with less overall space per seat.  I thought to myself that at this rate, the business-class seats will soon be chopped down to the old coach class size.  Then I noticed that several seats, including mine faced backwards, and the consequence was that I flew all the way to Japan for 14-hours facing the rear of the aircraft – interesting.

On the positive side, I did have the opportunity to watch three movies “Austinland”, “Man of Steel”, and “The Great Gatsby”, as well as to do some reading – “Civilization – the West and the Rest” by Niall Ferguson.  I was even able to manage a few moments of sleep in spite of the fact that I’m usually a very light sleeper, with the slightest amount of turbulence causing me to wake up.

The plane arrived at 4:45 PM right on time. Kaz was waiting for me in the airport arrivals area, and we then drove about an hour-and-a-half through downtown Tokyo, through Yokohama and straight to the Hotel Molino in Kawasaki – pretty good time. Even though our drive was during the Tokyo rush hour, the traffic moved right along. As I checked in to the hotel we were met by two of Kaz’s students, who were probably waiting there for some time until our arrival.  They were assigned by Kaz to be my go-fers for this visit. Kaz gave me a gift bag from Yashio with two large Japanese apples and some pastries as I took the elevator up to my room. The struggle to stay awake lasted until about 9:30 PM, at which time the jetlag finally prevailed. 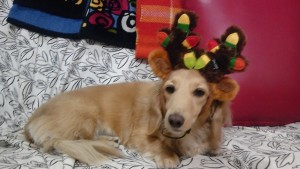 I awakened at 3 AM after about 6-hours of sleep.  There were a number of emails that needed responses, so I took care of those and then I gift-wrapped three Eastman scarves for Kaz, Yashio, and Fumiko (our translator) and also the dog antlers from Ruth for Kaz’s dog, Reia.  I had to travel with these gifts unwrapped to avoid problems with airline security checks and Japan customs, and I also had to pack wrapping paper and Scotch tape.   After wrapping everything I showered and got organized, separating my stuff between either the hotel closet or my carry bag to take with me to school.  One of the gift apples from last night became the day’s breakfast as I read the morning Japan Times.

At 9:30 I went down to the lobby to meet Noriko (she visited Rochester with Kaz this past March), who escorted me on the 2-block walk over to Showa.  The sun was shining, the sky was blue, and the temperature was very mild for December.  I wouldn’t even have needed a jacket, though I wore one anyway.  After taking care of the office business  – signing in, giving them my passport info along with a U.S.Tax form allowing Showa to avoid withholding taxes – I then delivered the just-wrapped gifts to everyone.

The first lesson began at 10:00 AM.  There were six lessons during the day and the repertoire was:

– GENERALLY SPOKEN, IT IS NOTHING BUT RHYTHM by Zivkovic (Marimba, Unacc.)

In general I was impressed by the attention given by the students to efficient setups, especially in the multi-perc pieces, and to the Gremlin-free sounds.  This was also another level of playing above what I have generally heard in previous years.  I don’t know if I have had any influence on the constant improvements in performance that I’ve observed on each successive visit, but I have to believe that there is at least some.

Fumiko Iishi served well again as translator for this visit, and I also met the new percussion professor, Toshiaki Ichiuchi, who courteously observed a couple of the day’s lessons.

The sessions ended at 5 PM, and I walked over to the Mylord department store next to the hotel and bought a few packaged groceries and beverages. As I write this I’m watching the Japanese figure skating trials for this year’s winter Olympics, and as the jet lag starts to set in, I have to again resist the urge to nap until at least 10 PM – still 3-hours away.

I made it until 5:00 AM before waking up this morning – some progress.  After responding to more emails and eating the pasta salad I bought last night, I watched a concert on TV of contemporary chamber music (all atonal and abstract) – a clarinet/piano duo, a wind quintet, and a mixed ensemble piece with a title something like “Alcoholic Travel Freakout,”  which is exactly how it sounded.  You would never see a program like this on American TV, even on PBS,  That program was followed by a samisen solo recital of traditional music played with sensitivity and virtuosity – fantastic!  Then it was time to head over to school.

The repertoire from the five lessons this day was:

Again I was impressed by the performances of the students.  In contrast to prior residencies, I didn’t have to address any problems with basics – setup, sounds, stand noises, or even stick trays. The Xenakis pieces provoked an interesting dialog with Kaz about the numerous questions that are raised in “Rebonds b” from the very first note.  For example, the opening 3-stroke drag ends on a double-stop.

Question #1 – Are the grace notes and the downbeat all played with one stick, while the other stick plays only the lower double-stop note?

Question #2 – Or, should only the two grace-notes be played in the right hand, with both double-stop notes being played together using two sticks in the left hand?

Then, there are more ambiguities about how to execute the rolls on the temple blocks and the double-stop rolls at the very end; on and on.

After school I walked over to the Vivre department store basement to buy some stuff for dinner.

Tomorrow is a day off.  Kaz and Yashio are picking me up at the hotel at 11:30 and we’ll drive to Yokohama for lunch with Yurika Kimura and her friend Akiko to exchange information about the xylophonist, Yoichi Hiraoka, and his influence on Japanese mallet performance.  It should be interesting.