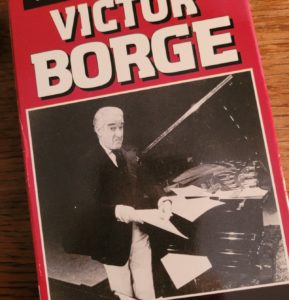 It all started this week with Russell sending us the insanity of Spike Jones and his City Slickers playing Holiday for Strings, remarking that “the expression on the gentleman’s face when Spike Jones fires the pistol is much like the look on Victor Borge’s face when we played Chamber Music.”

Which took us to Bill and his voluminous archives. He said the NEXUS performance of “Chamber Music” was on a CBC-TV program in the 1980s. With no printed program, Bill had no hard evidence to retrieve as to date and year. But the Toronto Star ran a photo of Victor Borge in May 1982 when he was in Toronto for his annual Ontario Place Forum appearance and was also taping the TV show Pop Goes the Music in CBC’s Studio 7. Bill takes up the tale:

“The TV program brought together three widely different musical genres – Victor Borge, the Chuck Mangione Quartet, and NEXUS.  During the program, there were no collaborations.  Each of the three entities simply did its own thing – each with only one piece (as I recall).

“I wouldn’t be surprised if John Wyre had some input – either on including NEXUS in the program or in the selection of the piece played by NEXUS, ‘Chamber Music’,  which was in our repertoire for a short time in the early 1980s.  It’s possible that the (pre-digital) TV program is still somewhere in the CBC archives.

“‘Chamber Music’ consisted of a large table in centre stage (in this case in the TV studio) surrounded by 5 chairs.  The table was filled with small percussion instruments, and behind Russell’s chair was a large tam-tam. NEXUS entered in suits as if attending a business meeting and everyone took a seat.  One-by-one each of us would pick up an instrument and make an (improvised) sound as if having a business conversation.  Over the course of the (musical?) conversation, the sounds would gradually become more intense and filled with chaotic energy, as if enacting major disagreements.  Then at the climax one of the players would pick up a blank pistol and fire a shot overhead into the air, and one-by-one the other players would join in with blank pistols until the loud shots were the only sounds.  At the same time, Russell would begin a crescendo in the tam-tam to molto fortissimo, overwhelming the gunshot sounds, and then striking a single triple forte note letting the tam-tam ring out for the next minute or so, as the pistols ‘clicked’ in the air (having discharged all of the blank cartridges).

“I remember that Victor Borge stood at the doorway taking in the whole performance in a kind of wide-eyed, jaw-dropped, dis-believing trance.

“There are other burned-in memories about the make-up room, the make-up women, and a conversation with Chuck Mangione, whom we both knew in Rochester and from playing and touring with his orchestra. But those stories are for another time.

“I’d love to find that program in the CBC archives someday (if it’s there).”