ROBIN ENGELMAN    Six years ago, on February 26th 2016, we received the sad news of the passing of NEXUS founding member Robin Engelman. The tributes poured in – moving, funny, telling – as colleagues, students, friends read the announcement. You can see these amazing comments on the home page of Robin’s website at www.robinengelman.com. Andrew Timar published a most fitting tribute in The WholeNote magazine Tribute to Robin in WholeNote, calling him “a passionately critical teacher and musical mentor to generations of percussionists.” The word “passion” got used a lot. So did “voracious”, and “curious”.  John Wyre once wrote that Robin brought “enormous authority to his performance and to his life.” Bill Cahn wrote a tribute sharing “only two of the countless – countless! – inspiring moments with Robin.” In early June, the Engelman family hosted a beautiful “Robin Engelman Life Celebration”.  Eleanor Engelman announced that Robin’s papers and historical materials are going to be housed at Northwestern University. There were guests from Hamburg Germany, Texas, Newfoundland, and of course many from closer-to-home. Bill Brennan had just completed his Masters in Conducting and he received Robin’s batons. There were videos and slides celebrating his many adventures, and an open mic that spurred many a tale. True to lifelong form, Robin himself had a hand in planning the celebration, giving instructions that there should be an oyster bar, spectacular cheeses, his son’s famous pulled pork recipe, and prosecco. An out-sized personality, and one that is still missed. You can read Andrew Timar’s piece HERE.     Bill Cahn’s recollections are HERE. 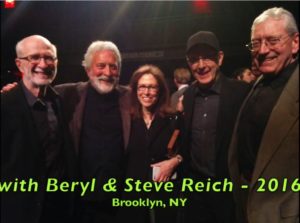 WORLDWIDE BIRTHDAY PARTIES   Steve Reich turned 80 in 2016, and to honour him that day, Russell Hartenberger announced the publication by Cambridge University Press of his book Performance Practice in the Music of Steve Reich. Reich wrote the foreword for it. In it, Russell describes his experiences including the early rehearsals of Drumming at Reich’s loft in Soho early in 1971. It was a year of birthday celebrations for Reich. He came to Toronto for performances of Drumming, Part I at Integral House and Clapping Music, Tehillim, and Music for 18 Musicians at Massey Hall as part of a Soundstreams residency. 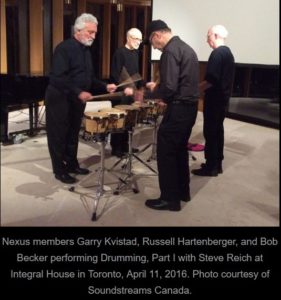 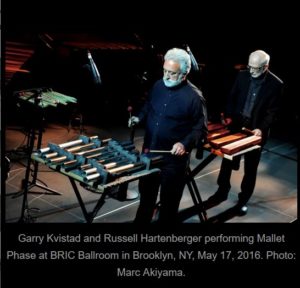 In May, we joined Sō Percussion, and Palladium Percussion at the BRIC House Ballroom in Brooklyn organized by Sō to honor Reich. In the Fall at PASIC’16 in Indianapolis, Russell gave a talk presenting highlights from his book.  You can see more photos and read Russell’s post about these and many more birthday celebrations that he attended (Finland, England, Newfoundland, Philadelphia, Switzerland, Carnegie Hall) HERE. 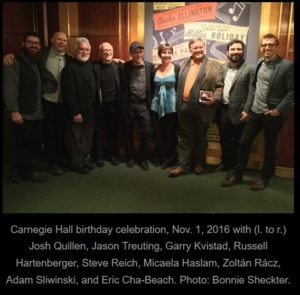 And you can see even more great photos and read about the interesting iterations of Reich’s Drumming with Sō Percussion and NEXUS at the Drumming At 50 website. You will also find over 50 fascinating Conversations there, from 2020 and 2021, hosted by Sō’s Josh Quillen, who approached it with “the aim of helping the guests tell me, and thus, US, something they’ve never told anyone else about this music and perhaps their own life.  I hope these conversations help you understand not just the music, but the people in the orbit of Steve Reich’s Drumming a little better.” Enjoy! You can access them all HERE. 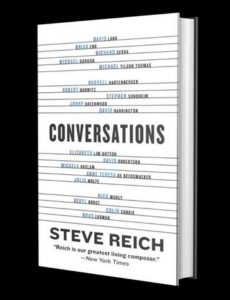 Another piece of Steve Reich current (2022) news: A new book, coincidentally also titled Conversations with Steve Reich has just been released.  GoodReads says, “Reich sits down with past collaborators, fellow composers and musicians as well as visual artists influenced by his work to reflect on his prolific career as a composer as well as the music that inspired him and that has been inspired by him.”  The conversations are with NEXUS member Russell Hartenberger, and with David Lang, Brian Eno, Richard Serra, MTT, Stephen Sondheim, Jonny Greenwood, Julia Wolfe, Nico Muhly, Colin Currie, Beryl Korot, Brad Lubman, Michael Gordon, Bob Hurwitz, David Harrington, Liz Lim-Dutton, David Robertson, Anne Teresa de Keersmaeker, and Micaela Haslam. 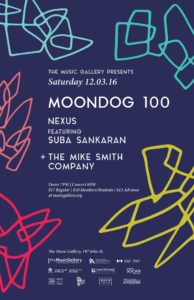 DOUBLE THE BONGOS, DOUBLE THE FUN    Late autumn found us celebrating New York street musician Moondog’s 100th birthday at Toronto’s Music Gallery with vocalist Suba Sankaran and the Mike Smith Company. We were also deeply involved in a symposium at the University of Toronto organized by Russell Hartenberger called Reich, Rhythm, and Repetition: Patterns in Music, Speech, and Science. It brought music and physics together in very interesting ways. 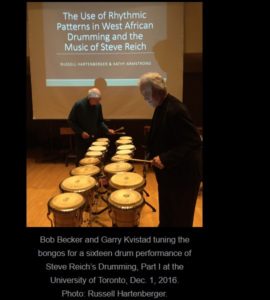 We premiered a 16-drum version of Drumming, Part I by Steve Reich. Russell says, “The idea to use twice the number of bongos normally used for the piece occurred to Bob Becker and me when we conducted an experiment at the LiveLab at McMaster University in Hamilton, Ontario to determine what actually happens in a phase as opposed to what I think happens in a phase.” You can watch Russell’s talk about this phenomenon HERE. 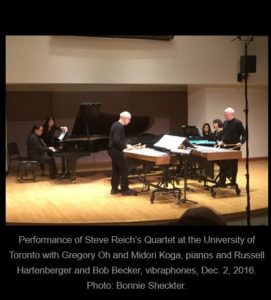 At the final concert Bob Becker and Russell on vibraphones joined Midori Koga and Gregory Oh on pianos for the Canadian premiere of Reich’s Quartet. 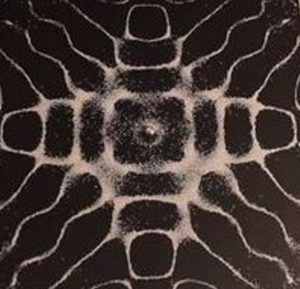 U of T physicist Stephen Morris lectured on Making Sound Visible showing the beautiful patterns that vibrations create and discussing how that discovery in 1786 led to several advances in mathematics and acoustics. Kathy Armstrong talked about Rhythmic Patterns in West African Drumming and the music of Steve Reich. Watch a great interview with her in Josh Quillen’s Conversations HERE.

CHIAROSCURO, HOME, and ROCKPORT   We had a great time in Rockport Massachusetts where Maria Finkelmeier joined us in this spectacular setting: 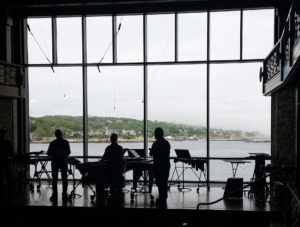 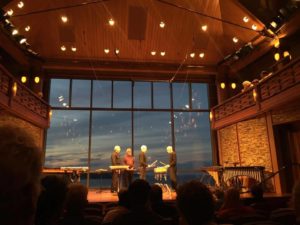 The beach shot below shows the theatre in the distance with that grand “picture” window that is actually the backdrop of the stage. 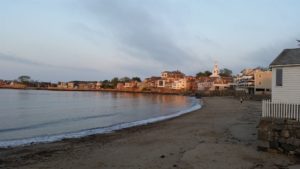 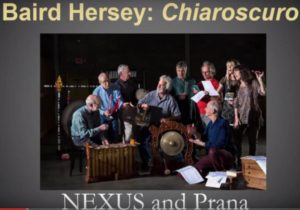 Over in Rochester NY, we got together with Michael Burritt to record his trilogy HOME for a forthcoming CD. This was also the year when Baird Hersey’s recording Chiaroscuro was released featuring Hersey’s vocal group Prana and NEXUS. Prana is a group of harmonic singers with the ability to sing two pitches at once. A couple of years prior, Garry had played his “vistaphone” for Hersey. The instrument’s sound combined with the harmonics of the voices combined into something unique and beautiful and Garry asked Hersey to compose a piece. Chiaroscuro is the result, written for voices, vistaphone, vibraphone, xylophone, drums, glockenspiel and marimba. The album is available on iTunes . A footnote from Garry: The 11th harmonic, featured prominently in Chiaroscuro, falls halfway between the 4th and the #4th scale tone of equal temperament. It is called the “crying” or “moaning” tone. 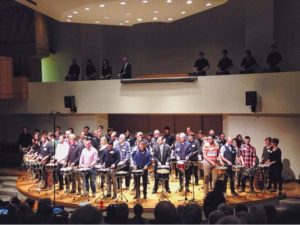 SNARE DRUMS, PODCASTS AND A TEDx TALK   Variety certainly added spice to 2016. Russell Hartenberger retired from the University of Toronto Faculty of Music after 42 years and a stint as Dean!! Alan Abel, Steve Reich and many others congregated for a celebration put together by Beverley Johnston which included an extraordinary snare drum roll salute played by sixty-seven drummers (they handed out earplugs to the audience), in celebration of Russell’s Snare Drum Olympics that he had founded in 1999. Read more about Russell at U of T here.   This “retirement” has of course freed him up for a lot more wonderful composing.

Bill Cahn did a great podcast with @Percussion which you can enjoy on Youtube HERE.  He talked about NEXUS, creativity, launching a musical career, his contribution on orchestral percussion to the new Cambridge Companion to Percussion that Russell edited, and much more. Steve Reich and Russell were interviewed by the BBC for the Modern Muses “Hear and Now” series and you can listen to it here . And Garry presented a TEDx Talk (pictured here) featuring the deep vibrations of his Vistaphone, a look at his first windchime made from a lawn chair, and a look at his Reichphone. 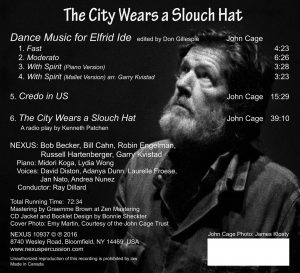 OUR ALL-JOHN-CAGE ALBUM     Last but not least, we were delighted to finally release our album of John Cage pieces in 2016, entitled The City Wears A Slouch Hat. In addition to the radio play of that name, the album also includes Dance Music For Elfrid Ide and Credo In US.