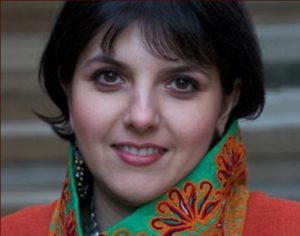 SEPIDEH RAISSADAT and PERSIAN SONGS    Our remarkable collaboration with Iranian vocalist Sepideh Raissadat began in 2014. Russell Hartenberger created several new arrangements for NEXUS and voice and entitled the suite “Persian Songs”. It was premiered at the Open Ears Festival in Kitchener Ontario, reprised at a Walter Hall concert in Toronto, and then we entered the studio to record with Sepideh. She was born in Tehran and began studying Persian classical music at the age of 9 with the famous Iranian Diva Parissa then continued with two renowned masters Parviz Meshkatian and Mohammad-Reza Lotfi. Her first album was recorded when she was 18. Sepideh sings and plays the setar, a Persian form of the lute. She was the first female vocalist to have a solo public performance before a mixed audience in Iran after the 1979 revolution (Niavaran concert hall, 1999). She is tremendously well-known in the Iranian and Middle Eastern community with tens of thousands of followers on social media, and every concert with Sepideh immediately sold out. She came to the University of Toronto where she obtained her MA and PhD in Ethnomusicology and where Russell was one of her teachers. He was intrigued by this beautiful music and he asked composer Reza Ghassemi if he could arrange some of his pieces for NEXUS and Sepideh. He agreed. The lyrics are from medieval poets – for example “A Cup of Wine to My Rescue – from your intoxicating glance”. You can read a great summary of the Open Ears concert by Garry Kvistad HERE.  Bill Cahn remarked that he most appreciated that this “ventured into unfamiliar musical territories, untouched anywhere else as far as I’m aware by the percussion ensemble paradigm.”  A special excitement for him was that he was able to premiere his cajon, a new instrument to him, at these concerts. Here are some pics taken at rehearsals and performances by Aydin Bahramlou. 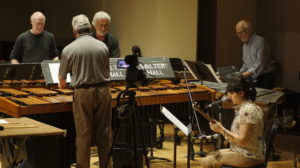 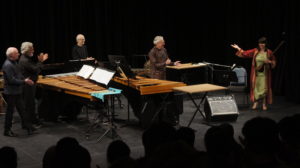 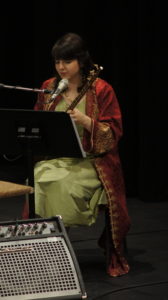 MOONDOG and SNAKE TIME   Russell was on a roll. In addition to Persian Songs he also completed his Moondog Suite for the concert of new works at the Open Ears Festival in Kitchener ON.  Moondog was a blind American composer, musician and poet, born in Kansas as Louis Thomas Hardin. He died in 1999. He moved to New York where he made his home on the streets, even though he was not homeless. (He had an apartment in Upper Manhattan). As Wikipedia tells us, “Most days he could be found in his chosen part of town wearing clothes he had created based on his own interpretation of the Norse god Odin” leading to his nickname “The Viking of 6th Avenue”. There is an excellent site called Moondog’s Corner where you can peruse his works, and you can find Moondog videos on Youtube. 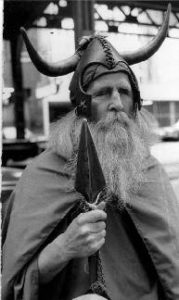 Moondog lost his sight in an accident at age 16 but had already begun playing drums. He met Leonard Bernstein and Toscanini, as well as jazz greats Charlie Parker and Benny Goodman who influenced his later work. He adopted the pen name “Moondog” in honor of a dog – they “howled at the moon” together.  Goodman and Toscanini helped him win a Supreme Court case against a disc jockey who was using the name Moondog. Moondog incorporated Native American music, jazz, classical and ambient sound into his music. He wrote hundreds of compositions in Braille, transferred to sheet music. At the request of Philip Glass he conducted the Brooklyn Philharmonic Chamber Orchestra at the New Music America Festival in Brooklyn, and that set off a whole new interest in his music. Both Glass and Steve Reich took Moondog’s work very seriously. Moondog said that what characterized his music was what he called “snaketime”. In a wonderful quote Moondog described it as “a slithery rhythm, in times that are not ordinary … I’m not gonna die in 4/4 time”.

MALLET PHASE AND AN IRANIAN GUEST    Our Walter Hall concert with Sepideh Raissadat had other treats in addition to Russell’s “Persian Songs” and “Moondog Suite”.  Garry Kvistad’s “Mallet Phase” (an arrangement of Steve Reich’s “Piano Phase”) made our ears perk up, as Garry and Russell performed on wooden bars (patterned on the Ugandan amadinda xylophone), tuned wind chime tubes (of which, as Garry – owner of Woodstock Chimes – pointed out, he “happens to have a great many lying around”) and PVC pipes slapped with foam paddles that Garry referred to as “slap sticks” – tongue firmly in cheek. Aside from the astonishing rhythmic solidarity of Garry and Russell, all three of Garry’s new instruments are tuned in just intonation, making the piece particularly interesting.

We were also most honoured that evening by the attendance in the audience of Naser Masoudi (b. 1935), one of Iran’s most famous singers, known as the Nightingale of Gilan. Gilan is the name of his home region in northern Iran. Most of his popular songs are in Gilan’s language, Gilaki. It was a spectacular evening, and we headed into Toronto’s Noble Street recording studios right afterwards to record the program. Here are a couple of studio pics, along with a few more photos by Aydin Bahramlou of the Open Ears Festival concert. You will see a shot of Bill getting into the cajon; and Russell explaining the story of Persian Songs to the audience. 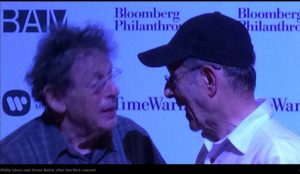 PHILIP GLASS AND STEVE REICH AT BAM    We’ve all had our “extra-curricular” activities – Bill with Paul Winter, Russell, Bob and Garry with Steve Reich. In September 2014 there was a three-day series of concerts at the Brooklyn Academy of Music showcasing Steve Reich’s and Philip Glass’s music, in part a celebration of the 50th Anniversary of Nonesuch Records, and of course three of our number were a part of that. You can read all about this historic event, with Reich and Glass together onstage for the first time in 30 years. Garry Kvistad has an excellent blog post about it HERE with pics that will enlarge if you click on them. This was part of the 2014 Next Wave Festival and you can see a bit more about it on the BAM site: http://bit.ly/3fbGSgV . Here are some photos. 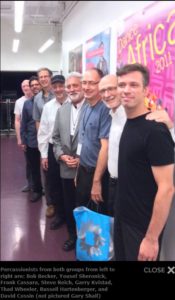 WITH ALAN ABEL IN PHILADELPHIA    We spent a remarkable week in Philly. The Chamber Music Society asked us to help celebrate Alan Abel’s 85th birthday along with a series of clinics, coachings and rehearsals in collaboration with Curtis Institute and Temple University and a grand concert that included Bob Becker’s “Mudra” and his new work “Preludes”, Russell Hartenberger’s piece “Cadence” (he packed his Low C singing bowl for that one), “Day and Night” by Rolando Morales-Matos, and Maurice Wright’s piece “Octet”. Mr. Abel was one of the performers and conductors in a program was designed by principal timpanist of Philadelphia Orchestra Don Liuzzi. Garry and Bill also celebrated their birthdays in the same week – lots of cake and candles! Here are some great pics: 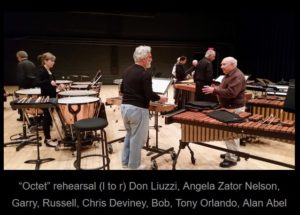 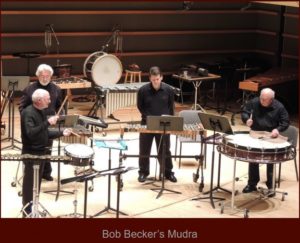 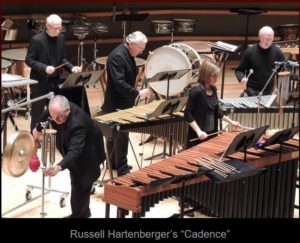 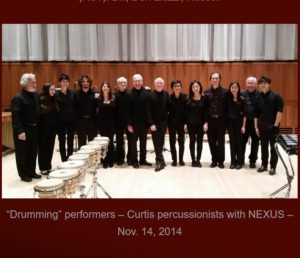 The Inquirer’s review called it a “bang-up occasion”, saying the stage was so full of “instrumental hardware”, it was a case of “marimba gridlock”! Reviewer Stearns said of Russell’s and Bob’s works: “Hartenberger’s Cadence was full of pregnant symbolism, quoting from the funeral drums of John F. Kennedy’s cortege, with resonance into our own time…Most entrancing was Becker’s 1990 Mudra, a work full of scales from India, layered over each other with a level of atmosphere seldom heard elsewhere….”  He described the “legendary” Alan Abel as “small but magnetic, hovering over the instruments with maternal care”. And he reported that the audience “had an unusual hipster contingent”!

Read more from Garry about the Philadelphia connection HERE.

DRUMMING, TORQ and JAMES PREISS    When we were at the Open Ears Festival in Kitchener ON with Sepideh Raissadat, we performed a second evening with the Toronto percussion ensemble TorQ (Richard Burrows, Adam Campbell, Jamie Drake, Dan Morphy, with guest Brennan Connelly) presenting the complete work of Drumming. Gillian Stone, Amy Gottung and Laura Chambers also joined in on vocals and piccolo. Everyone played phenomenally in what was a fairly rare performance of the complete piece. (Part one alone of Drumming is performed more often). 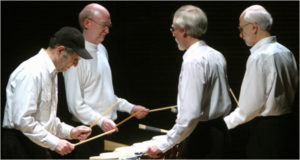 This was the year that the percussion world lost James Preiss, a founding member of the Steve Reich Ensemble, and pictured here performing Drumming with Steve, Bob and Russell. Right at the start of Drumming, in 1971, Jim was recommended to Steve who asked him if would be interested in attending rehearsals for Drumming. At that time, Russell Hartenberger was the only schooled percussionist in the ensemble other than Steve himself. So, Jim and Russell became the first two core percussionists in Steve Reich and Musicians. Jim and Russell played in the premieres of Drumming in December 1971. You can read Russell’s tribute to James Preiss, written in 2014, on the “DRUMMING at 50” website HERE. 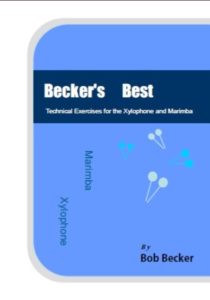 BECKER’S BEST    Our concert at Toronto’s Walter Hall with Sepideh Raissadat also featured another special treat – a Bob Becker marimba solo, “Dance of the Octopus” by Red Norvo. Bob arranged the piece for solo marimba. This was also the year that Xylomusic published Becker’s Best, a collection of Bob’s most effective technique exercises for the xylophone and marimba. Bob says, “All of the studies in the book can be practiced to build speed and accuracy, and after they are learned at tempo they make a great daily warm-up routine.” (available through Steve Weiss Music and Lone Star Percussion.)