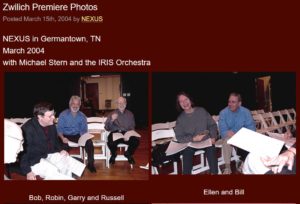 A KID IN A CANDY STORE: ELLEN TAAFFE ZWILICH    In March 2002 Ellen Taaffe Zwilich agreed to write a piece for NEXUS and chamber orchestra. We premiered the new work, “Rituals”, at the Germantown Performing Arts Centre in Tennessee with the IRIS Orchestra under Michael Stern in March 2004. Zwilich said that working with our array of instruments was like “being a kid in a candy store…I spent a lot of time thinking…It was practically twice as long as I originally thought. It got pretty mammoth.” Of Zwilich, Michael said, “She has the craft that makers her artistic imagination speak.” 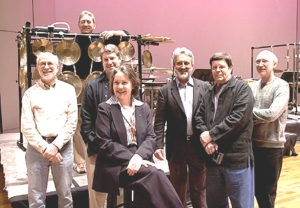 Among numerous honours, Zwilich was the first woman ever to receive the coveted Pulitzer Prize in Music. The IRIS Orchestra prided itself on commissioning a new American work each year. Michael Stern conducted both the premiere and the recording that took place next day. Our association with Michael traced back to orchestral performances in the 1970s and 80s and to our Sept.’98 performances of the Takemitsu concerto in Germany and France with the Saarbrucken Radio Orchestra. Zwilich left about 50 % of the 2nd & 4th movements for improvisation, paying tribute to the “element of chance” in live music. As you can see in the photos, we had great fun in rehearsal, and great fun choreographing our performance on walls of instruments.

New Music Box called it “one of Zwilich’s most exciting compositions to date”. The Juilliard Journal said, “…[Zwilich is] one of today’s most versatile composers at the peak of her game. ” Sequenza21 called it “supremely listenable, accessible, and perhaps not coincidentally, beautiful.” Reviewer Christopher Blank said, “The percussive palette is extraordinary.” Classics Today calls Rituals “a total delight”.

Excerpts from the piece: http://bit.ly/38peLag 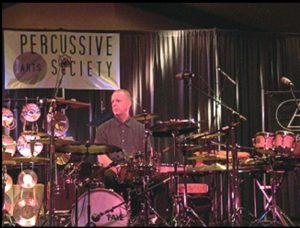 WITH FRITZ HAUSER AT PASIC   We first heard Fritz (and he, us) at the Stockholm International Percussion Festival in 1998. That Stockholm experience created a desire to perform together and that was satisfied six years later when we presented a concert of improvisation in Nashville Tennessee at the Percussive Arts Society International Convention. The excitement and energy was palpable and cannot be captured in mere photographs. Garry talks about his instruments for that performance: “I have used a number of homemade instruments in NEXUS improvisations starting when I joined the group in 2002. Many of them were hybrid instruments of parts given to me by Bernard Baschet, an incredible French instrument builder who worked with his brother Francois. The highlight for me was the improvisation concert NEXUS did with Fritz Hauser at the PAS convention in 2004. I had two custom handpans made by the PanArt company of Switzerland tuned to my specifications of ancient scales. I used these instruments on that concert and on the later recording with Fritz.”   Thanks to Eleanor Engelman for photos of the PASIC concert. WORLD AIDS DAY    In December 2004 we participated in the World AIDS Day event at the University of Toronto. In the 2 years prior, the number of women infected by HIV had risen by 50% in East and Central Asia and Eastern Europe, and AIDS was the leading cause of death for African-American women aged 25-34. Girls and young women made up 75% of young people who were HIV positive. The United Nations wanted to raise awareness that “The face of HIV/AIDS is increasingly female.” At the University’s Faculty of Medicine, Dr Philip Berger had an outstanding reputation for championing the health needs of vulnerable populations and had just taken on a 7 1/2 month assignment as Team Leader of an AIDS initiative in Lesotho in southern Africa – facing extraordinary challenges. He stayed on well past his scheduled return date, and made a major difference to AIDS care in that area. (Today, sadly, Lesotho is confronting very serious CoVid challenges.) We were happy to be a part of the World AIDs Day 2004 event along with Kwasi Dunyo, founder of the West African Cultural Exchange. You can read more about World AIDS Day (its theme in 2020 was “global solidarity, shared responsibility”) at https://www.unaids.org/en/World_AIDS_Day

FOR THE BYRDS   Over the previous 10 years, one or two of us as individuals would participate in Garry’s annual concert called The Woodstock Beat. In 2004 NEXUS in its entirety joined in and performed on two evenings. Garry’s annual concert was produced to raise money for the Byrdcliffe Arts Colony which had been established a hundred years prior, in the hamlet of Woodstock NY by Englishman Ralph Whitehead. It is the oldest operating arts and crafts colony in America. Byrdcliffe was created as an experiment in utopian living inspired by the Arts and Crafts movement and is still operating today in an environmentally protected area on 300 acres with 35 original buildings, all designed in the Arts and Crafts style. There is a self-guided walking tour and also a hiking path that leads to the mountain top with a lookout over the Catskills. The Colony hosts an Artist-In-Residence program that houses over 70 artists each summer  -writers, composers, and visual artists. Peter Schickele had his summer home in Woodstock and his “Percussion Sonata #2 – Woodstock” that he had written for us was on our program along with our other repertoire and also a new piece written by Garry entitled “It’s About Time (Now)”.  Our whole setup for the concerts would not fit in one photo, so we had to take three! You can read an interesting interview with Peter Schickele at http://nyti.ms/2LLHsoY 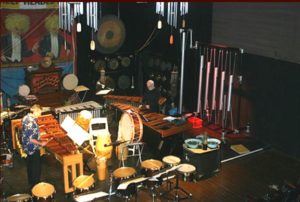 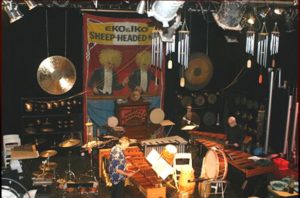 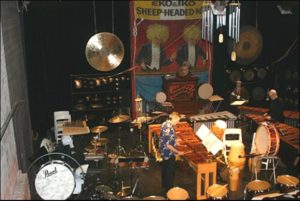 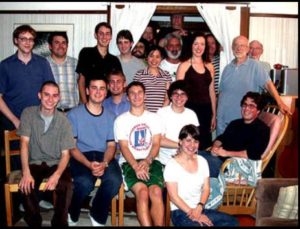 SILVER CREEK    August took us to a residency close to home, the Silver Creek Summer Music School held at the University of Toronto. The week was intense. We coached student ensemble rehearsals daily to prepare for their concert at the end of the week, held open rehearsals for students to attend and gave workshops.  The student ensembles performed West African Drumming – facilitated by Bob Becker, Creative Music Making (Bill Cahn), John Cage’s Early Percussion Music (Robin Engelman), Steve Reich’s Drumming, Part I (Russell Hartenberger), Tune by Mario Bertoncini (facilitated by Garry Kvistad). And we did a ton of workshops: Bob presented The Magic and Mystery of Cymbals, and Xylophone History and Performance Concepts; Bill did Concert Snare Drum, Bass Drum, Cymbals, Triangle and Tambourine Overviews; Robin presented the elaborately named Evolution of Western Snare Drumming: The effects of 400 years of Military Duty On Drums and Snare Drum Technique and Traditional Music for Drums and Fife; Russell did Rhythm and Time in Music;  Garry presented Sound Science. And then there were Masterclasses where students played for us and received feedback. There were listening and viewing sessions with discussions about performance practices and the art of listening. At week’s end the students performed their coached pieces in a public performance and we gave a solo evening concert. A special trip to the Physics Department at the University of Toronto was arranged where a lecture was given regarding musical acoustics and a vast collection of historic acoustical measurement equipment was demonstrated. And of course there were the social activities – lunches and a big evening party. A full week – a fun week! There are plenty more photos of the students on the NEXUS blog at 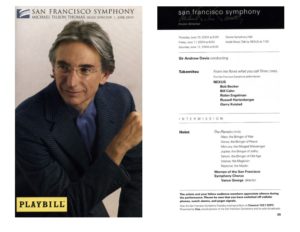 SAN FRANCISCO SYMPHONY   We had the wonderful opportunity to work with Sir Andrew Davis once again when he guest conducted 3 performances of the Takemitsu concerto “From me flows what you call Time…” with the San Francisco Symphony. Our connection with the maestro dated back to performances of John Wyre’s work, “Connexus” with the Toronto Symphony in 1978, 1983 and 1992, and with the New York Philharmonic in 1984. And you will recall that it was Maestro Davis who actually gave “Connexus” its name!  In 1992 and again in 1998 we had performed the Takemitsu with Maestro Davis for the BBC Proms, and we were delighted to have “another go at it” with our friend of over 25 years of music-making. 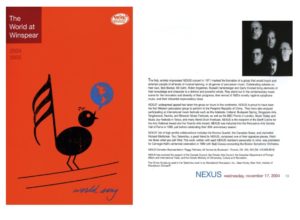 EDMONTON INTERVIEW WITH BOB BECKER   We were delighted to return to the beautiful acoustics of the Winspear Centre in Edmonton, Alberta for the first time since 1992. And Edmonton welcomed us with open arms, throwing around terms like “supergroup” and “one of the premiere musical ensembles of our time.”

Roger Levesque of the Edmonton Journal had a pre-convert interview with Bob and also reviewed the concert afterwards. Here are some excerpts: With regard to our collection of unique instruments, Bob said, “We’re kind of a show whether we like it or not. And it’s astounding the number of musical styles and instruments there are around the world that we still don’t know. Every year we encounter something that leaves us wondering, ‘How come we didn’t know about that?’”  With regard to our history: “[John] Cage…and his concept of sound awareness was very significant for all of us. The idea of being able to accept sounds of any kind as having meaning and potentially being musical was huge…For someone like myself, who was trained for classical music and symphony playing, it was an amazing liberation to improvise without any predetermined structures. That’s all we did for the first four or five years.”

Later Levesque wrote: “NEXUS has developed unmatched ears when it come to seeking out the rhythms of the world and transforming them into something new. Musicians behind Stomp and Blue Man Group readily admit a debt to Nexus…focus with Nexus and you will hear their wood and metal instruments come alive to reveal a vast, brilliant universe of tone colours…plumbing a fount of textures and effervescent melodies that seemed limitless. There couldn’t have been a better place to hear it either, given how the ultra-live acoustics of the Winspear amplified even the subtlest moments…It’s hard to overstate just how phenomenal these master players were.”  Thank you Mr Levesque, and thank you Edmonton! 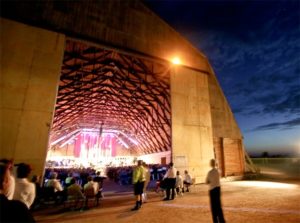 ELORA AT TWENTY-FIVE   Elora Ontario with its picturesque gorge, 19th century limestone mill and its fine choir under the direction of Noel Edison celebrated the Elora Festival’s 25th anniversary in July and we joined them. You will recall that 15 years before, we had performed for the Festival, (east of Toronto), in an actual limestone quarry with superb natural acoustics that they had recently begun to use as the venue of gala evening concerts enhanced by special lighting effects. This time, however, we performed in the Festival’s Gambrel Barn. The photo here (by David Pike) is from the festival’s 2009 opening night but we wanted you to see this rather amazing space! In a joint concert with the celebrated Elora Festival Singers, we presented an evening of improvisation, traditional African music, and early American drum and choral works. These latter works were particularly Robin Engelman’s “thing”, and there were 11 pieces on the program arranged by Robin. R. Murray Schafer’s “Epitaph for Moonlight” and Lee Kesselman’s “Shona Mass” were also part of our evening “buffet”. 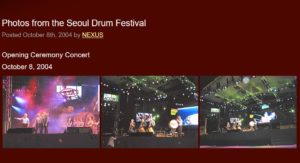 WE GOT SEOUL    You know we couldn’t get through a year without shipping ourselves and our instruments overseas!   October took us to the three-day Seoul International Drum Festival in Korea as the featured group, along with other prominent percussionists from around the world. Sadly, Bill Cahn was unable to be there for this one. When Bob Becker was asked what he remembered most about the Festival, he said, “Missing Bill.”   Awww.   He also recalled hanging with master drummer Gideon Alorwoye (one of Steve Reich’s teachers in Steve’s original 1970 trip to Ghana) and Gideon’s observation that “A lot of people know how to hit a drum, but not many know how to play one…”. As you can see from the photos at the Outdoor Plaza Concert Space, the stage was gigantic, making for some weird acoustics, and lasers and smoke were prevalent.