After posting the information about the publication of “Time Zones” (see my preceding blog post), I received the following response on Facebook from Lee Gurst, whom I have known since high school days in Philadelphia, at which time I greatly admired his concert snare drumming. Lee studied with Philadelphia Orchestra percussionist, Michael Bookspan, one of the greatest orchestral snare drummers of all time. Lee and I both performed in the Philadelphia Youth Orchestra during our senior year in high school. In the summer of 1964 we both performed in Stravinsky’s “Les Noces” at the Marlboro (VT) Music Festival along with Mr. Bookspan, who graciously treated us budding students bound for college as colleagues.

Lee’s question:  Bill – I have a particular interest in notation for percussion instruments. I’m curious about your choice to use “tremelo” markings for the rolls [in “Time Zones”] rather than quavers on the stem of the notes. Would you please share your thoughts on this subject? Thank you.

My response:   Your question about tremolo notation (tr) for the snare drum rolls requires a rather lengthy response. In “Time Zones” the issue is addressed on the “Key” page (below) which defines the notation used in all five pieces. 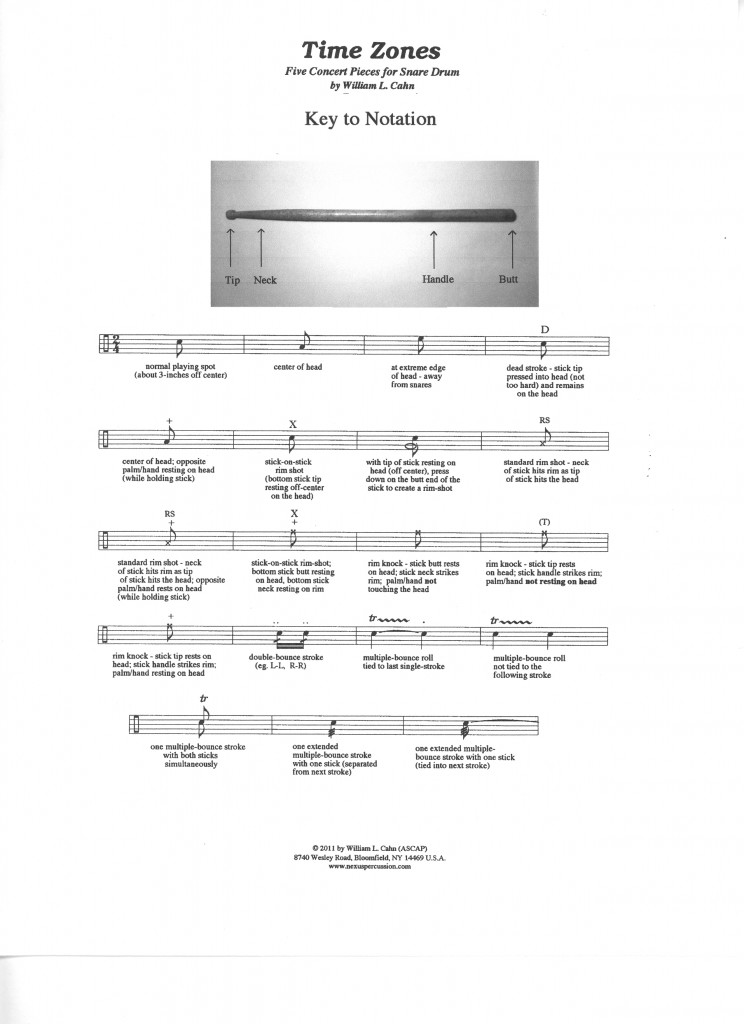 The primary issue with notation for snare drum rolls, as with notation for other percussion instruments, is that there is almost always a certain ambiguity with regard to the actual sound that is intended. There is no standardized notation system, so each composer is essentially creating a composition-specific notation, and many composers (and performers) make no distinction between multiple-bounce rolls and double-bounce rolls.

A good example of the kind of the ambiguity in the notation for snare drum rolls is with the use of stem quavers to indicate a roll. The main question is: “Should the roll be played with multiple bounces to simulate a sustained tone, or should the roll be played with double-strokes in a precise rhythm? (For example, with three quaver-lines through the stem of a quarter-note, the precise rhythm would be to play eight 32nd-notes; this notation is in the timpani part of the first movement of Beethoven’s 9th Symphony, and it is normally played as measured, not sustained.) There is no ‘correct’ answer to the question. Each percussionist must consider other factors beyond the notation: the type of music (“Is it a march, or a symphony?”) and generally observed performance practices (“How is it played by other percussionists – past and present?”).

Another example of notation ambiguity can be found in the 12 Studies for Snare Drum by Jacques Delecluse, which is currently in use worldwide as part of the college-level percussion curriculum. Throughout the 12 studies, Delecluse indicates rolls using the tremolo (tr) notation instead of the stem quavers, and consistently there are no ties notated to connect the rolls to the following notes. Even though there is a forward page in the 12 Studies describing the notation, there is no clear answer provided to the following questions:

1) Should the rolls be played with multiple-bounces or with double-bounces?

2) Should the rolls be tied to or separated from the following note?

For the first question, I usually advise students to play sustained multiple-bounce rolls when they see the tremolo notation, because the musical style of the 12 Studies is more closely connected with concert music (rather than a military or march-like music) sensibility. For the second question, I advise being able to play the tremolo rolls in both ways – as a roll tied to the following note, and as a roll having a slight separation from the following note. While it is entirely up to each player to determine how to interpret the tremolo rolls in performance (viva la difference!), my thinking is that most juries would prefer to hear the rolls tied, while I would interpret the notation exactly as written – if no tie is written, I would separate the roll from the following note.

One last point – while these issues are of important concern to percussionists and their teachers, it is highly unlikely that the nuanced differences between the alternative interpretations of roll notation described above would ever be challenged (or even noticed) by most conductors and audiences.