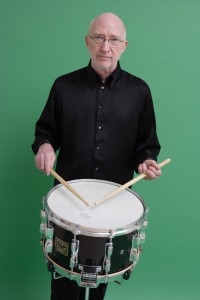 Melodic Snare Drumming is a conceptual approach to playing snare drum that involves physically hearing or – equally well – imagining a melodic accompaniment while performing or practicing. This idea is in fact very old, and for centuries was the system through which military-style drumming was taught, practiced and played. The first part of the workshop is simply an invitation to listen and experience the relationships between some traditional drum beatings and the melodies from which they were derived. In order to create these relationships, drummers used patterns that came to be called rudiments – patterns containing information regarding rhythmic shape, stroke density, time value and sticking. The second part of the workshop, Rudimental Arithmetic, is also about a conceptual approach to playing the snare drum, however, rather than a particular way of listening, it involves a particular way of thinking. Specifically, it is an analysis of the flexible rhythmic character and densities of rudiments – in particular rolls, diddles and drags – and a demonstration of how the concepts may be applied to interpretation, improvisation and composition.