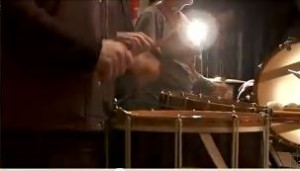 Bob Becker has a great clinic available called Melodic Snare Drumming and Rudimental Arithmetic.  Melodic Snare Drumming is a conceptual approach to playing snare drum that involves physically hearing or imagining a melodic accompaniment while performing. Bob says the idea “is in fact very old, and for centuries was the system through which military-style drumming was taught, practiced and played.”

With NEXUS’ long-time involvement with ragtime music from the turn of the 20th century, the  group has in its repertoire James Lent’s 1908 piece The Ragtime Drummer which features Bill Cahn on snare drum along with the pitched percussion instruments. It’s unusual to hear the snare drum used in this type of setting. Interestingly, in light of Bob’s comment, Lent was a professional military drummer.  You can hear the original, released on cylinder record ca. 1908, on the  Internet Archive  and also on the Smithsonian Folkways site.
You can also see and hear a bit of NEXUS snare drumming in this short video trailer for the Canadian Brass “Stars & Stripes” recording released in 2010 with arrangements by Robin Engelman and Howard Cable, featuring members of NEXUS and percussionist Ryan Scott.
But back to Bob’s Melodic Snare Drumming workshop:  The first part of the workshop invites participants to listen and experience the relationships between traditional drum beatings and the melodies from which they were derived. Drummers developed patterns that were called rudiments, containing information on rhythmic shape, stroke density, time value and sticking. The second part of Bob’s workshop, Rudimental Arithmetic, involves a particular way of thinking about playing the snare drum:  it is an analysis of rudiments – in particular rolls, diddles and drags. The workshop is completed with a demonstration of how these two concepts of listening and thinking about the snare drum may be applied to interpretation, improvisation and composition. It may be an old approach but Bob presents it in a very new way.