I’m excited and pleased to announce that Bachovich Music Publications is now publishing my “Time Zones – Five Concert Pieces for Snare Drum.” The compositions are intended to be added to the repertoire for solo percussion recitals, and the five pieces were composed to be complimentary, so that any number of them – from one to five – can be performed in any combination.  Each of the pieces is dedicated to a percussion colleague whose playing has been an inspiration to me.

Thanks to worldwide advances in communications, percussion performance in all musical genres has been the beneficiary of an amazing acceleration in technical capabilities. These solos are intended for advanced players. The technical challenges here largely have to do with differentiating among the variety of sounds that the snare drum is capable of producing.

Anticipation (Dedicated to Bob Becker) explores a rhythmic device that is commonly found in Jazz, in which motifs and phrases come to an ending in advance of a downbeat, sometimes anticipating the beat by the smallest of margins.

Doumbekka (Dedicated to Russell Hartenberger) mimics the contrasting sounds common to the doumbek, the Middle-Eastern hand drum having an hourglass-shaped resonating shell. The two dominant characteristic sounds of the doumbek are the low sounding fundamental pitch, “doum,” and the sharp high-pitched sound, “bek.”  These two sounds are implied on the snare drum by open strokes and rimshot strokes.

Roll A-Round (Dedicated to Garry Kvistad) explores the nuanced differences between two main types of snare drum stick strokes that employ bounces – the double-bounce stroke and the multiple-bounce stroke. These strokes are combined to form rhythmic patterns and phrases. This piece can also be performed by two players as a ‘round,’ in which one player begins and the second player starts later playing the exact same phrases.

Six-by-Five (Dedicated to Michael Burritt) is an interplay of five-beat phrases presented in a six-beat time signature. When any of the five-beat phrases is repeated six times – sometimes altered with one or more variations – the repeated phrase can then fit exactly into five measures. The listener may hear the repeated phrases as in a 5/8 time signature, while the performer has the challenge of perceiving both 5/8 and 6/8 somewhat simultaneously.

Rockin’ Roll (Dedicated to John H. Beck) is composed around two basic traditional snare drum strokes – the single ‘tap’ stroke and the double-bounce stroke – both played within a perpetual motion of alternating hands. The effect is of a two-layered sound – the accented tap strokes producing the forefront rhythm and the double bounce strokes providing an underlying drone. 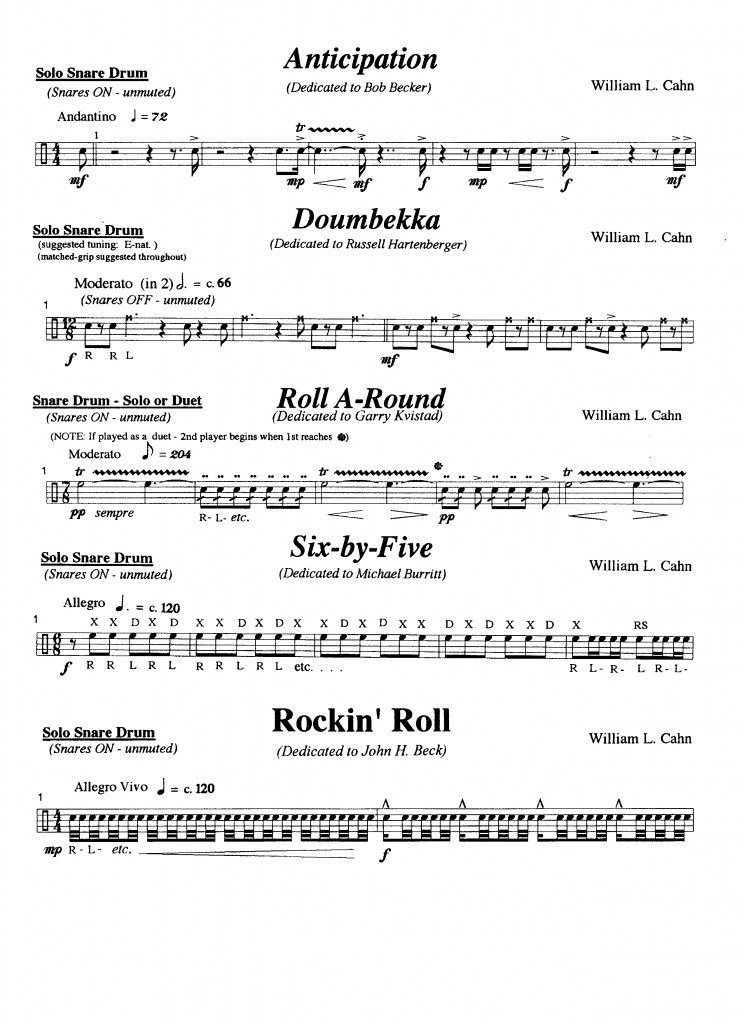