On Sunday November 15 Kaz, Aya, Nonoka, Michael Burritt and I flew back home from the San Antonio PASIC to Rochester by way of Charlotte, NC. The three visitors from Japan were our guests for a few days. It was a very clear dark night when we finally arrived at my house, and as we unloaded our baggage from my car, Aya and Nonoka became entranced as they looked up into the star-filled night sky with a clearly visible Milky Way and no moon. They are never able to see the sky in Tokyo. (Lots of Ooos and Ahhhs).

Monday the 16th began with a late wake-up to makeup for intensity of the PASIC days. Aya and Nonoka wanted a marimba lesson, so after Ruth’s homemade breakfast, we went down to my basement, where the students performed a Trevino Marimba duo titled, “2+1”. After a good run-through there were things to talk about with a focus on sound, dynamics and phrasing. Aya also played through a Michael Burritt solo marimba piece before it was time to drive to the Eastman School in order for both students to have a shared lesson with Michael at 2:30. Their lesson with him went well and as usual, he was very generous with his time; the lesson went almost to 4 PM.

After the lesson the four of us – Kaz, Aya, Nonoka and I – walked over to the new rehearsal room in the Eastman East Wing to hear a rehearsal of the Eastman Wind Ensemble and greet Mark Scatterday, the EWE’s conductor/director. It was a real surprise to discover as we entered the rehearsal room that the Wind Ensemble was rehearsing a timpani concerto by Jeff Tyzik with Chip Ross, the timpanist of the Rochester Philharmonic, playing the solo part. Of course, Chip sounded great and the two students from Japan took it all in.

We then had a light dinner – quesadilla and pizza – before returning to the Eastman Theatre to hear a concert by the Eastman School Symphony Orchestra conducted by Neil Varon, who was the conductor when NEXUS performed Zwilich’s “Rituals” at the Percussion Rochester event in May 2012. The program was “Russian Easter Overture,” the Vaughn Williams “Oboe Concerto,” and the “Young Person’s Guide to the Orchestra” with lots of percussion and a narration made especially for this performance at the Eastman School. All of the performances were wonderful, and the Japanese listeners were greatly impressed.

On Tuesday morning the 17th I listened to Nonoka perform my arrangement for solo marimba of “In Deep Woods” from “New England Idyls” by the pioneer American Composer, Edward MacDowell. It was the first time I had ever heard it performed, and I used the opportunity to consider a number of potential revisions that occurred to me as I listened. I will definitely be revising my arrangement as time permits in the upcoming weeks.

After the lesson, we all drove to The Eastman Theatre to hear an afternoon rehearsal of Prokofiev’s “Romeo and Juliet” by the Rochester Philharmonic Orchestra conducted by the orchestra’s new Music Director, Ward Stare. (What great music!)

When the rehearsal ended we decided to walk next door to Java’s Café, but we were sidetracked on the way by the sound of big band jazz coming from Kilbourn Hall, so we changed plans and went inside to hear the Eastman Jazz Lab Band rehearsing for their evening concert.

For dinner we walked around the corner to a Belgian restaurant called “Victoire” to meet Mark Boseman, who was with his wife, Laura, and 3-year-old son, Oliver. Mark knew Aya and Nonoka from his visits to Japan to coach at the Kunitachi School, so the dinner was a kind of mini reunion for them. At my recommendation when Kaz visited Rochester several years ago, Mark had performed for Kaz on marimba, and as a result Mark was invited to Japan. His sessions there were so successful that he was invited back in 2014, at which time I was able to observe Mark’s workshops in Yokohama, and see the positive responses from the Kunitachi and Showa students.

At 7:30 PM Kaz, Aya, Nonoka and I walked back to the Eastman School to watch a rehearsal of the Eastman Percussion Ensemble. Hanna Weaver, a graduate student, was coaching a piece by the Japanese composer Jo Kondo, whom NEXUS has known since 1976 through a number of NEXUS performances in Japan over the years, including the Japanese premiere of his composition, “Nocturnal,” commissioned by NEXUS in 1997.

At 8:00 the four of us walked over to Messinger Hall to hear some of Ruth’s Eastman Community Music School Percussion Ensemble rehearsal. They were working on the Ney Rosauro Marimba Concerto No. 1, and Ruth wanted some feedback from Kaz. Ruth’s high school students all gave the piece a good performance for us.

Around 8:30 we walked back to Kilbourn Hall to hear the last two pieces on the first-half of the Jazz Lab concert, after which we decided to call it a day. 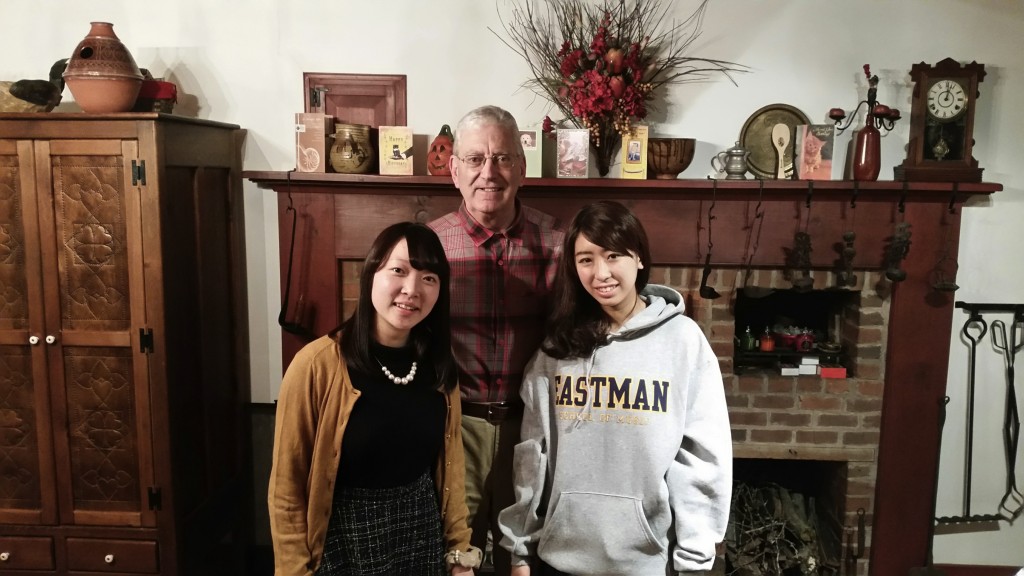 After dropping Kaz, Aya and Nonoka off at the Rochester Airport for an 8 AM flight home to Narita via Chicago, I returned home to load up my van for an afternoon rehearsal of the ROCdrummers. It would be the dress rehearsal for an upcoming concert on Friday. As soon as I finished load the phone rang and it was Kaz; their flight to Chicago was cancelled because O’Hare was closed due to a snowstorm. The only option was for them to book a connection through Boston the following morning, departing Rochester at 6 AM. This would mean bringing my guests home for the additional night and waking up at 4 AM to get everyone to the airport. On the drive back to the Rochester Airport I remembered that there was a Hyatt right there only a 1-minute walk from the check in counter, so I pointed this out to Kaz and we both agreed that staying at the Hyatt (at a special room rate for cancelled flights) would be the best option. I helped with the check in as Kaz, Aya, and Nonoka settled in for a day’s rest, I headed home again.

The afternoon dress rehearsal of the ROC drummers went very well. Also on the program were several other ROCmusic ensembles – 2 orchestras, and 2 choruses – so everyone took part in a run-through in the program order with all of the setup changes.

Thursday November 19th was finally a day to start tackling the buildup of work on my desk over the last few weeks – music and CD orders, emails, letters of recommendation for former students, invoices and utility bills, etc. Just before I dived into the pile, Kaz called to report that he was already in Boston and would be leaving on the connecting flight to Narita shortly. Relieved by that news I made major inroads into the stack of correspondence before the evening Eastman School Chamber Percussion concert performed by first and second year students. The program consisted of works by David Skidmore (of Third Coast Percussion), John Cage, Paul Lansky, Christopher Deane, Ivan Trevino, and Torbjorn Iwan Lundquist. The Trevino piece, “Almaty” was the same work performed by the International All Star Ensemble at PASIC, and it featured a quartet of players on mounted crotales – very cool sounds – accompanying two marimbas, a vibraphone and glockenspiel, all performed beautifully.

On Friday November 20 the ROCdrummers presented their evening concert as part of the ROCmusic Fall Harvest Concert at the David F. Gantt Community Center in Rochester. The ROCdrummers version of “Damba” was performed in eight contiguous sections –

The amadinda trios were performed with me on one side of the amadinda playing simple improvised rhythmic patterns over the drum ensemble accompaniment, and two of the ROCdrummers at a time on the other side of the amadinda copying my improvised patterns. After each and every pair of amadinda players did their thing for about a minute, I motioned for the full audience of about 200 parents and friends to give the players a round of applause, which the audience did vigorously each time. “Damba” was performed two times during the concert so that all 40 or so of the ROCdrummers would have a chance to play it with every player having a “moment in the sun” during their spotlight amadinda appearance.

The musical month of November concluded on Saturday the 21st with the evening series concert of the Rochester Philharmonic Orchestra performing selections from “Lohengrin” by Wagner, “Toward the Unknown Region” (with full chorus) by Ralph Vaughan Williams, the “Violin Concerto” by Samuel Barber performed by Simone Porter, and selections from “Romeo and Juliet” by Sergei Prokofiev. “Romeo” was particularly poignant for me – as was the “Daphnis” of the San Antonio Symphony a week earlier – since I am 20-years removed from having the day-after-day experiences of immersion in the unmatchable sound of an orchestra conversing with the music of great composers. It was truly an emotional thing to recall, as these inspiring works filled the air.