Saturday, November 7th was the date for the opening of the new Center for Mallet Percussion Research at Kutztown University – a 4-1/2-hour drive into central Pennsylvania. I arrived at the University’s Schaeffer Auditorium around noon and met with Dr. Frank Kumor, the Assistant Professor of Percussion Studies, and Dr. Willis Rapp, the retired professor and former chair of the KU Department of Music, who is now with the Kutztown University Foundation, a supporter of the Center for Mallet Percussion Research. After unloading the 13 boxes containing my archived collection of over one-thousand ’78 RPM acoustic disc records featuring the xylophone made between 1890 and 1929 (see the previous blog posting), I visited the rooms set aside for the new Center and viewed the collection of rare vintage marimbas, xylophones and vibraphones, including a spectacular Musser vibraphone (Model #??), the first I had ever seen. The instruments had been donated to the Center by U.S. Army Staff Sergeant Dana Kimble, retired percussion instructor at West Point Military Academy. Also on view at the Center was an archive of memorabilia belonging to Clair Omar Musser – photos, scrapbooks, and published works. 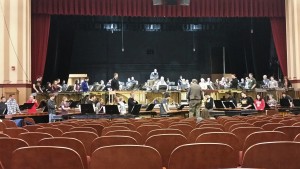 The “Celebrate Marimba” orchestra in Schaeffer Auditorium at Kutztown (PA) University on November 7, 2015

Next, I observed the rehearsal of the “Celebrate Marimba” orchestra, consisting of dozens of marimbas of all stripes, including some that had been part of Clair Omar Musser’s original marimba orchestra in the 1930s. The program included “Selections from ‘Carmen’” conducted by Dr. Kumor, Chorus from “Tannhauser’” conducted by Dan Armstrong, “Adagio for Strings” conducted by Dr. David Eyler, “Bolero” conducted by Dr. Rapp, and featuring the world premiere of Gordon Stout’s “Dream-Awakening and Dance”, conducted by the composer, with soloists Bob Becker and Yurika Kimura. 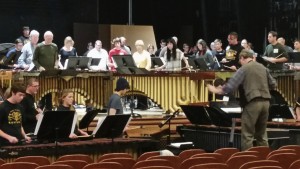 At 3:00 PM I gave my presentation titled, “The Xylophone In Acoustic Recordings 1877 to 1929” for about 50 attendees. The slides and recorded examples were based on my 284-page discography having the same title.

The Sunday November 6 open dress rehearsal and late afternoon performance were both wonderful. Arriving from Connecticut for the rehearsal was Lew Green Jr. the nephew of the great xylophonist from the early days of recorded sound, George Hamilton Green. Lew had with him a scrapbook that belonged to George H. Green’s family. The well-aged scrapbook contained family photos – many of which I had never seen – and newspaper clippings of reviews from G.H. Green’s many live performances, especially when he was young. Material on George’s brother, Joe Green, was also copiously included. Lew gave a pre-concert talk to the assembled marimbaphonists, who listened intently. Lew Green speaking to members of the “Celebrate Marimba” orchestra

The late afternoon concert was virtually sold-out, and the audience eagerly responded to the ensemble’s performance. Needless to say, the solo performances of Musser Etudes by Bob Becker and Yurika Kimura, as well as by Gordon Stout (accompanying a silent film of a very young Clair Omar Musser playing the marimba) were awesome. The “Celebrate Marimba” orchestra in concert at Schaeffer Auditorium on Nov. 6, 2015