On November 11, my 69th birthday (whaaat!) I flew to San Antonio for the 40th Percussive Arts Society International Convention, the annual gathering of about 6000 percussionists/drummers from all over the world.   After checking in to my hotel I contacted Kazunori Meguro (‘Kaz’), who had just arrived from Tokyo and who was staying at the same hotel. Since 1998 Kaz had been my colleague at the Showa Academy of Arts in Atsugi and Kawasaki, Japan, and he is now on the faculty of the Kunitachi Conservatory in Tokyo. He had traveled to San Antonio with two of his Kunitachi sophomores, Nonoka and Aya. Kaz had visited me in Rochester many times, but this was the first trip to America for the students. After registering for PASIC at the Convention Center we all walked to a Tex/Mex restaurant on the Riverwalk and then went back to the Convention Center for the evening concert. The program was titled, “Time and Motion: The Art of the Percussive Gesture” and it contained a good bit of “imaginary music” – a subject I had explored in the early 1970s with my composition, “Perplexus.” What goes ‘round . . . .etc. At the Tex/Mex restaurant on the Riverwalk
(l-r) Aya, Nonoka, Kaz

Thursday the 12th was an open day at PASIC for me. The schedule was:

9 AM – “Perspectives” which included Aiyun Huang and Ivan Manzanilla in a fascinating side-by-side performance of “?Corporel” by Vinko Globokar.

11 AM – Brian Del Signore’s Symphonic Snare [Drum] Lab which described ways to use digital self-recordings in the process of preparation for auditions.

2 PM – A panel discussion by the University Pedagogy Committee, during which it was reported that some music schools are no longer offering degrees in music performance, but rather in “Music Business,” requiring only a small change in the existing curriculum with the addition of a few business courses. This conceptual shift made a lot of sense to me, because no one has ever asked me if I had a performance degree, and I suspect that no one would ever care. Also, when I reflect on the cost of a college degree in music performance in relation to the income that such a degree is likely to generate, I become uncomfortable. There are other less costly ways to pursue a career in music performance, albeit requiring a solid personally proactive plan, without the security and resources of a fulltime conservatory environment. In addition I have regularly suggested to students that graduate school be avoided – except for anyone interested in teaching at the college level, for which a doctorate, or at the very least, a graduate degree is expected. So it was interesting to me that some music colleges have not only come to the same realization about the changes in societal values that I have observed, but they have already acted on it.

4 PM – Glen Valez’s World Lab on the subject of “Guided Movement Meditations for Frame Drums ‘On the Knee’ Position” in which 40 frame drums were provided for attendees.

8:15 PM – Evening Concert by Ghost Note (Nate Werth and Robert Searight) in which there were three drum sets, a hand percussion console, an electric bass and a saxophone. It was in-your-face loud, fast, intricate, highly technical, driving grooves with occasional solo moments over the grooves. 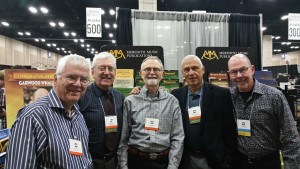 9 AM – Glenn Paulson’s Cymbal Clinic was excellent; every sound he made in his demonstrations of cymbal techniques was perfect.

12 PM – Christopher Lamb’s Symphonic Clinic dazzled the audience as he played through a smorgasbord of orchestra excerpts, ragtime solos, and musical quotations confidently and with ease.

2 PM – Michael Burritt conducted the PASIC International All-Star Percussion Ensemble – comprised of college-level audition winners – in a crystal clear performance of Varese’s “Ionisation” – one of the cleanest and tightest performances I’ve ever heard (and I’ve heard many). Also on the program was a great performance of Ivan Trevino’s “Almaty” and Burritt’s “White Pines” (originally composed for NEXUS at Percussion Rochester 2015) in a new arrangement for 8 players with the composer as the solo marimbaphonist. This was clearly an audience favorite. 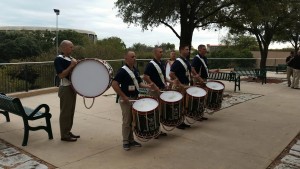 In between sessions we stopped for a moment to listen to a rehearsal of the U.S. Army Old Guard Fife & Drum Corps

7 PM – After a very nice dinner on the Riverwalk with Lauren and Ron Weiss, Heather Thorn and Yurika Kimura, I grabbed a taxi for the 30-minute ($60) drive to the University of Texas-San Antonio to rehearse with NEXUS for the Saturday concert. Upon my arrival at the music building I heard what sounded to me like the NEXUS “Ragtime” CD, but it was Bob Becker rehearsing with students from the Oak Ridge (TX) High School percussionists; amazing!

7 AM – The morning began early by schlepping my case of percussion stands, triangles and tambourines over to Ballroom C3 in the Convention Center to meet Alan and Jan Abel and help with the setup for the Emeritus Session. Mr. Abel’s instruments were stored elsewhere and no one could be found to give him access to his stuff, so we re-positioned a few instruments that had already been brought to the stage.

8 AM – Mr. Abel’s stuff arrived in good order and the entire Emeritus Section had its dress run-through of the repertoire. (To see the listing of repertoire & Emeritus members click here: Handout EmeritusPASIC’15 Drft#6 copy). The rehearsal was punctuated with hilarious under-the-cuff orchestra sarcasm of the type I knew on a daily basis when I was in the Rochester Philharmonic. I wish I had recorded it – then and now – for posterity.

9 AM – The Emeritus session was well attended. Emeritus member, Tom Aiken, wrote and delivered the narration, which was both informative and witty for the audience. 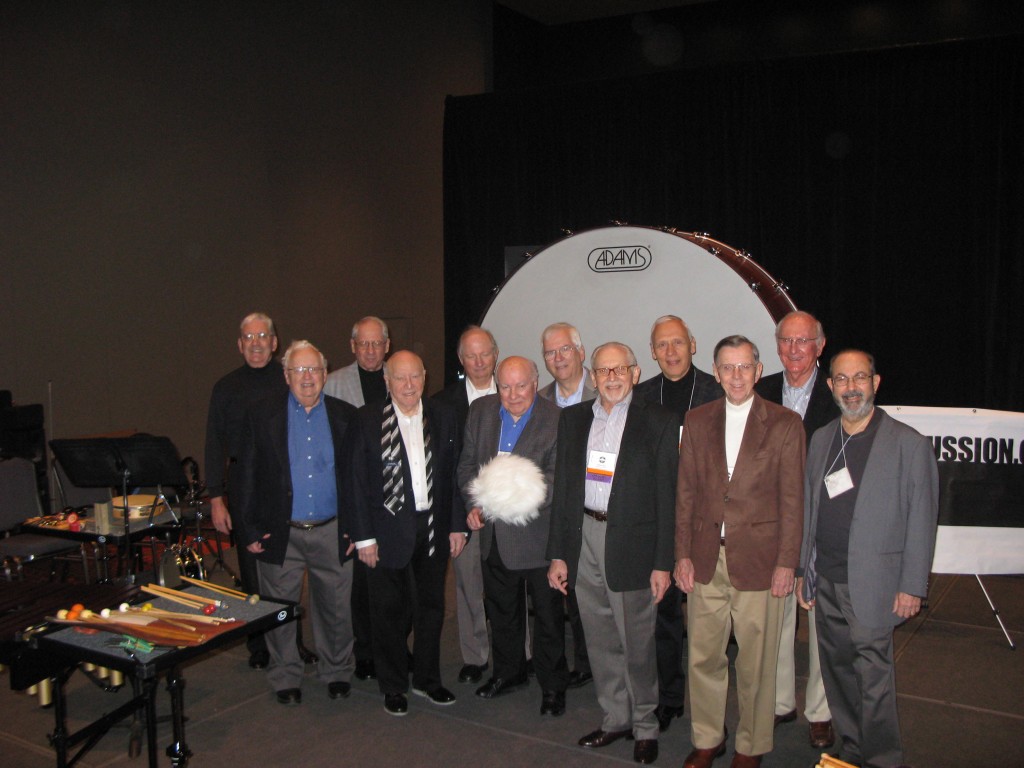 Of course, Alan Abel’s snare drumming provided a significant ‘wow’ factor for the proceedings. At the age of 86 his snare drumming in Ravel’s “Alborada Del Gracioso” was as inspiring as I will ever hear it. The standing ovation from the audience at the conclusion of Respighi’s “Pines of the Appian Way” was not only about the performance, but also about the years of great playing and teaching represented on stage by the Emeritus members. For me it was simply an honor to be on the same stage with these guys.

3 PM – NEXUS, Sepideh Raissadat, and Ray Dillard assembled in the Lila Cockrell Theater for the setup and sound check for our daytime showcase concert. We would be introducing the percussion world two musical paradigms outside of the norm – the music of Louis Hardin (aka. Moondog) and the classical music of Iran (Persia), all as arranged for NEXUS by Russell Hartenberger. The Persian music would feature vocalist Sepideh Raissadat, who’s brilliantly clear and nuanced singing and playing of the setar (a traditional Persian string instrument) would certainly bring a magical sense of beauty to the concert.

4 PM – The NEXUS performance went marvelously well, as evidenced by the vigorous response of the audience at the conclusion of “Persian Songs.” Among other memorable moments were perhaps the softest musical phrases at PASIC during the entire week – the almost imperceptible sound of the glockenspiel, songbells, vibraphone and marimba in “Pastoral,” the 5th movement of “Moondog Suite;” delicious! Also memorable were the tears on the face of the audience member who presented Sepideh with a bouquet of flowers after her performance, and likewise on the faces of a number of friends who greeted us on stage in a sort of ad-hoc post-concert reception.

7 PM- Kaz, Aya, Nonoka and I hailed a taxi to take us to the Tobin Center for the Performing Arts to hear the San Antonio Symphony and its guest artists, D’Drum perform Stewart Copeland’s “Gamelan D’Drum.” We arrived at the hall early, which allowed us the time to each enjoy a café-latte in the lobby’s concession area. 8 PM – The performance of “Gamelan D’Drum” was fantastic, with some wonderfully orchestrated sonorities created by the gamelan instruments in combination with the orchestra’s woodwind and string sections. There were many moments, as the five members of D’Drum moved around the stage crammed with gongs, drums, and assorted small percussion instruments, during which D’Drum provided the audience with visually engaging facial expressions and physical gestures. The audience was so involved in the music and visuals that there was a spontaneous ovation at the end of the first of three movements – concert etiquette notwithstanding – and an immediate standing ovation at the end.

The second half of the symphony concert was Ravel’s “Daphnis and Chloe” suites 1 & 2. It was very satisfying to hear this delicate and emotionally-charged music played by a large string section along with absolutely first-rate playing in the many solo passages by the first horn and woodwinds. The symphony’s enlarged percussion section had 8 players plus timpanist – including Alan Abel on Field drum and Rich Weiner on tambourine. Lauren Weiss invited me to sit in the 2nd-level balcony for the second-half, so I had a good view of the full orchestra and especially of the percussion section. I was profoundly touched by the performance, which raised many memories from when I was with the Rochester Philharmonic.