Another summer session at the Eastman School of Music provided yet one more amazing experience with Creative Music Making – free form improvisation – this time explored by high-school-age students coming to Rochester from all over the world. This summer’s CMM group included 25 young musicians, divided into 2 classes. The classes each met for 1-hour, two times in weeks 1 & 2 and one time in week 3 for a total of five sessions each, prior to the final recital in Kilbourn Hall on July 30. Among the participants were 2 flutes, 2 clarinets, 1 bassoon, 1 saxophone, 1 horn, 2 percussion, 2 violins, 1 viola, 1 cello, 3 pianists, 7 sopranos, and 2 composers. When asked in the first session, most of the participants responded that they had never improvised. Those few who did have some improvisation experiences indicated that they were mainly in playing in the jazz idiom.

The two summer class sizes were uneven; one class had 15, the other 10. The length of each session was about 50-minutes, not counting late starts due to the transition time for the students between courses. Normally, for the collegiate CMM course there are seven 2-hour sessions for a class size of 12. This allows for considerable development of listening and playing skills with small groups of 3 or 4 players. The shorter amount of available time in the summer classes meant that it was not possible to have everyone play several times in small ensembles, and then still have time to listen to each playback and have a discussion about what they heard.

I decided that it would be best to focus on what I have called ‘tag team’ improvisations, in which 3 players begin, and then one-by-one, one of those players exits as a new player enters into the music. This process continues until everyone in the class has participated in the improvisation. In this way it became possible to have everyone play in each class, and still have time for a complete playback and discussion. It also had the advantage of enabling everyone to experience improvisation in exactly the same way as it would be presented on the final recital, in which there would be only be very limited time available because there would be a number of other ensembles on the programme. The tradeoff was that none of the players would have an experience of improvising a complete piece from beginning to end. All-in-all, it was a fair tradeoff, because otherwise, the important steps of listening and discussing, which are so frequently overlooked in the development of improvisation skills, would have been given very little time.

Session by session the number of ‘consonances’ in the improvised pieces increased as the scope of listening broadened from self-awareness to ensemble-awareness to music-awareness. Simultaneously the players’ initial level of angst and tension evaporated into a level of comfort and ease.   From the very first session I made it clear to all of the participants that I would not ever tell anyone what to play; that each player would have to decide what to play. Even so, from time to time I would be asked for a suggestion about what to do, and my response was always ‘listen harder.’ Eventually, whenever the question arose again, I would respond, ‘what do you think?’ and the questioner would then hear everyone in the class say, “LISTEN HARDER.”

Finally, it was time for the recital. All 25 players from both classes would participate in a single tag team improv. Because of the continual turnover of players, each individual player would have about 90-seconds to play in order to keep the overall length of the piece to about 15-minutes or so. One of the participants volunteered to speak briefly to the audience before the piece began. This was to let the audience in on the process:

The improvised piece was titled “Horizons Fantasia” on the programme and for 16-minutes the music was wonderful (as it invariably always is) – satisfying in the extreme. 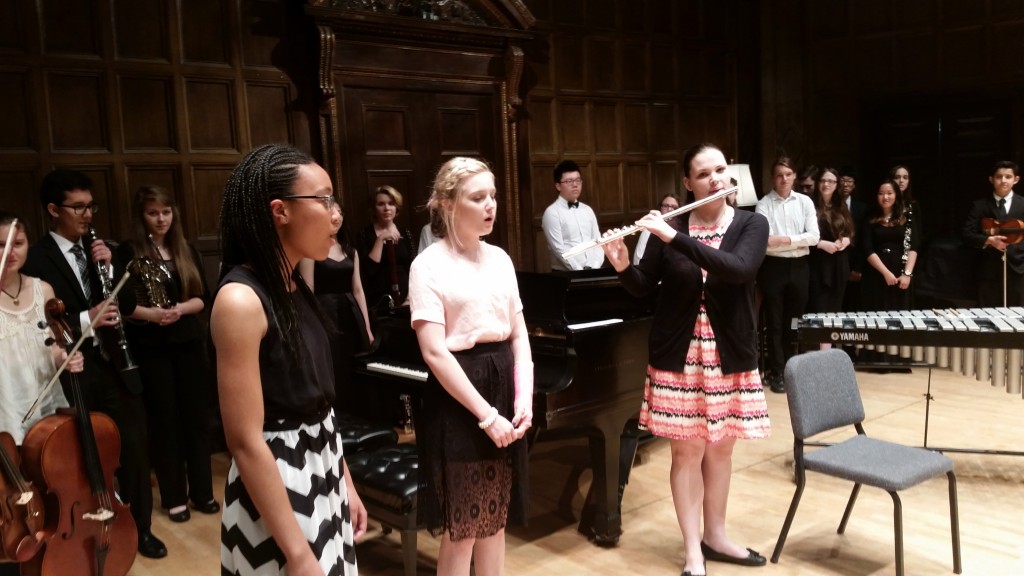 A scene from the performance of “Horizons Fantasia” on July 30, 2015 in Kilbourn Hall