In the middle of my third year as an Associate Professor of Percussion at the Eastman School of Music, I entered into a new musical experience.  On Tuesday, January 11 a new course of study at Eastman titled, “Creative Music Making,” began in its first of seven weekly 2-hour sessions through January and February.  The course was based on my book “Creative Music Making” (Routledge, 2005) and was part of the Eastman Arts Leadership Program.

I have given a number of individual 2-hour Creative Music Making (CMM) workshops around the world since the book was first published, and I have even facilitated several week-long CMM summer workshops at Eastman in years past, but until this new course I had never facilitated an extended series of sessions, so this was a learning experience for me as much as for the twelve participants.

As soon as the CMM course was offered online in the preceding semester (fall 2010) the course became fully booked, and a number of subsequent requests for participation had to be denied.  The twelve participants consisted of 5 percussion majors, 3 violinists, 1 cellist, 2 pianists, and 1 trumpeter.

Most of the participants had limited experience in any kind of improvisation – a few had done freeform improvisation once or twice, and another few had done a minimal amount of jazz improvisation.  All were eager to dive in.  The first session began – as it normally does – with the presentation of about 15-minutes of preliminary background information and a summary of the process.

Then, as is also normal, an introductory short freeform piece was improvised by myself on vibraphone with one of the participants, in this case Alice, on piano.  The point of the first improvisation is to provide a starting model, and to remove any potential concerns among the participants that the playing would somehow be intimidating.  The initial improvisation was recorded and played back for listening and discussion.  In the remaining 90-minutes, each of the participants performed in trio and quartet improvised pieces.  In general, as is normal, the initial improvised pieces were short, somewhat tentative and modeled on the first piece.  However, the level of musicianship among the Eastman students was already well developed, and the improvised pieces were  broadened in terms of their musical vocabulary very quickly.

In each of the five subsequent weekly sessions, every participant had the opportunity to play in an improvised piece, mostly in quartets determined on a volunteer basis.  With each week’s opportunity to improvise, the players were able to get further beyond their earlier inhibitions, and to play with more confidence, to listen more deeply to the unfolding music, to contribute increasingly appropriate musical responses, and to develop their musical ideas more fully.  It was important that each improvised piece was recorded and played back for analysis, in which all twelve participants – one-by-one – contributed to the discussions 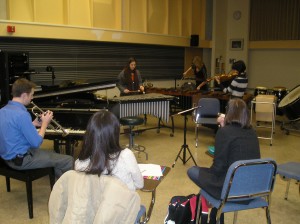 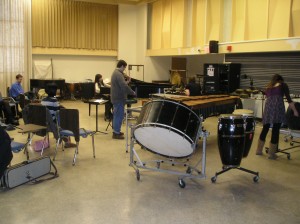 The final session on February 22 was an informal improvisation recital.  Each of the three participant ad-hoc quartets performed a freeform improvisation of about 15-minutes in length.  All players were responsible to address the audience prior to their improvisation, informing listeners about the players and the music.  The three  improvisations in the recital – each by a quartet of mixed instruments – were wonderful.  The pieces were engaging and organic, and presented with confidence.

Finally, all participants completed a questionnaire, which is included below. 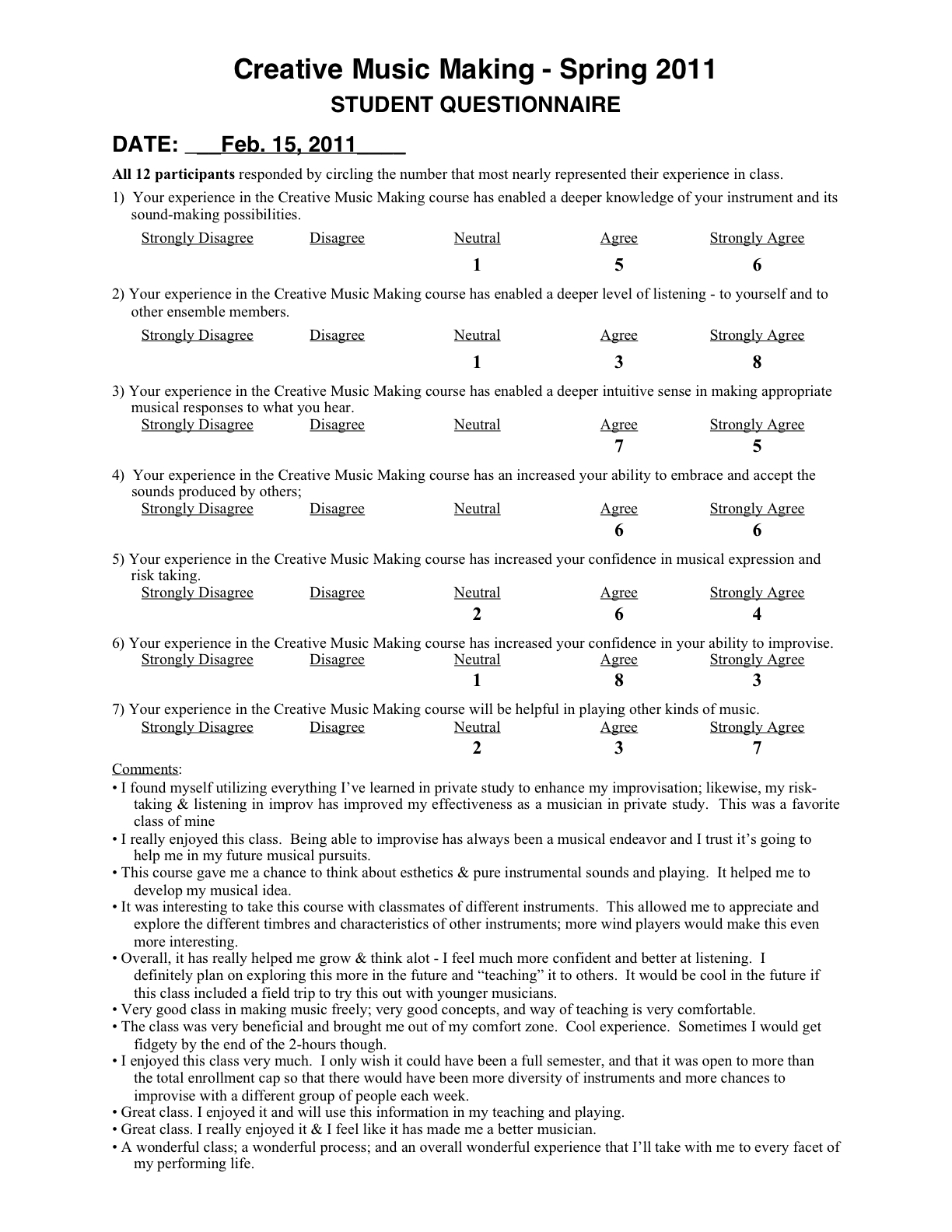