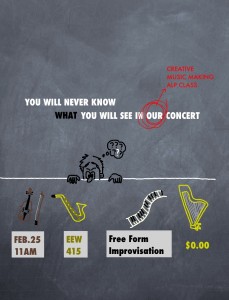 On February 25 the final session of the Eastman School’s 2014 spring semester “Creative Music Making” course concluded with a free improvisation recital.  The seven-week ALP course is open to all Eastman students – instrumentalists and vocalists – and it is structured to provide practical experiences for the participants in performing and teaching freeform music improvisation.  For this semester’s eleven instrumentalists, this 45-minute public performance was the culminating application of their work. As is virtually always the case, the improvs were deeply engaging and fun for both performers ands listeners.

The Creative Music Making course at Eastman has now finished its fourth year, and a few consistencies have become apparent:

1) The Eastman students generally come into their first sessions with an already-full bag of skills on their instruments.  However, even when given instructions to play “whatever they want to play”, the first attempts to improvise together produce very tentative responses.  As might be expected with any new experience, there is generally a lot of self-inhibition and insecurity.  There is also a healthy skepticism about the thought that “there are no wrong notes.”

2) As the semester progresses, and as the performers gain the confidence that they are indeed free, and that their performances are not being judged (at least by me), the improvisations grow in complexity as the musical ideas are more easily embraced and more deeply developed.

3) The sense of ensemble – listening to and supporting the other players – also tends to develop in ways that will very likely be useful for any kind of ensemble performance – orchestra, band, small ensemble – regardless of the musical style.

4) The recitals in the final sessions have always been fantastic – profoundly engaging and performed with confidence and a sense of responsiveness to whatever musical ideas emerge. 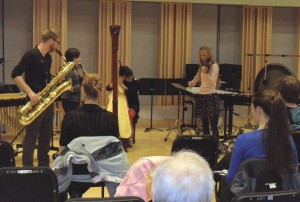 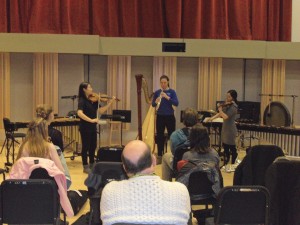 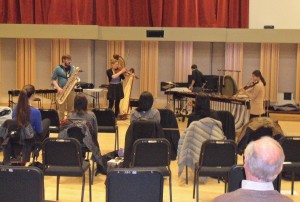 Here are some of my favorite quotations about music improvisation.

“We learn to improvise by improvising.” – NEXUS member John Wyre, Touched by Sound

“I would sit down and begin to improvise, whether my spirits were sad or happy, serious or playful.  Once I had captured an idea, I strove with all  my might to develop and sustain it.” – Joseph Haydn, quoted in Hopkins, Music All Around Me

“As an improvising musician, I am not in the music business, I am not in the creativity business; I am in the surrender business.  Improvisation is acceptance, in a single breath, of both transience and eternity.  We know what might happen in the next day or minutes, but we cannot know what will happen.  To the extent that we feel sure of what will happen, we lock in the future and insulate ourselves against those essential surprises.  Surrender means cultivating a comfortable attitude toward not-knowing, being nurtured by the mystery of moments that are dependably surprising, ever fresh.” – Stephen Nachmanovitch (http://improvinsights.com/tag/stephen-nachmanovitch/)

“Maybe once a night, as I was soloing on some familiar song, I would play a brief melodic phrase or two that I hadn’t seen coming. This was momentarily disorienting, like hitting a patch of ice on the highway.  I played something I’d never played before – and hadn’t even consciously conceived before my hands just took over on their own.  When this first happened, I thought maybe I was just imagining it. But as it happened more and more, I tried to analyze it, and what I discovered remains  one of my biggest breakthroughs – as a musician, but especially as an improviser.    In considering this phenomenon, I had two realizations: whatever I played in that spontaneous state was very different from my usual playing, and these moments of music were the best I played the whole night.  I made it my goal to trust this new experience whenever it occurred and to see if I could let it continue, instead of feeling the need to jump back in and retake control. I was just beginning to understand the role of the unconscious mind in playing music.” – Gary Burton, Learning to Listen

“Improvisation cannot be rehearsed.  Training is substituted for rehearsal, and a certain moral discipline is an essential part of this training.  Improvisation is in the present.  Its effect may live on in the souls of the participants, both active and passive (the audience), but in its concrete form it is gone forever from the moment it occurs, nor did it have any previous existence before the moment that it occurred, so neither is there any historical reference available.  Informal ‘sound’ has a power over our emotional responses that formal ‘music’ does not, in that it acts subliminally rather than on a cultural level.  I am searching for sounds and for the responses that attach to them, rather than thinking them up, preparing them and producing them.  The search is conducted in the medium of sound, and the musician her/himself is at the heart of the experiment.” – Cornelius Cardew