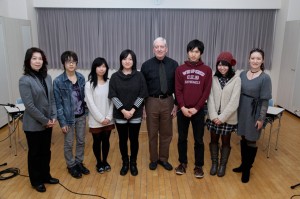 December 10. 2013 Showa English class (Professor Kosai is on the left)

As a part of my regular visits to the Showa Academy in Japan, I am sometimes asked to visit an English language class to have a conversation in English with some of the students for an hour or so.  It’s my experience that we English speakers can be very spoiled as we travel to non-English speaking places, because English is so widely considered essential that an English-only speaker – like me – can almost always get by without having to learn another language.  Over the years at Showa, I have picked up a few useful phrases for lessons:

mo ichi do (one more time)

However, I don’t really have the vocabulary for nuanced conversation, or even for some of the most basic essentials.  Given this state of affairs, I am always glad to be of some help to students who want to speak English.  Here is an excerpt from my visit to Professor Fumiko Kosai’s English class.  It took place on Decemver 9, 2011.

Yohei : And can I ask you one more question? I wondered. . . In Japan, there are Japanese musics, like Gagaku.

Yohei : But in Japan, Japanese tends not to play that much of Japanese traditional music, but to classic and rocks, so what do you think about Japanese not playing, or not really listening to their own music?

Mr. Cahn : Everyone has the right to like whatever they like. However, I think the tradition is something that’s valuable and worth preserving. And it’s not required that everybody like it. But it’s very nice if some people like it. And I think that what is happening, not only Japan, but all over the world, is that traditional musics are subject to extinction.  And I think it’s really good to preserve them because it’s another way of looking at life in the world.  In Gagaku, especially, I think it’s very powerful music.  I have only heard it live once.  I have heard many recordings of it, but it’s a very spiritual music and the sense of time is very open and intense. And there’s nothing else quite like it in the world.  It would be a shame to lose it.

Does everybody have to like it?  We can’t make that happen. But it’s worth preserving.  So, I think if I were Japanese I would not object to. . . the government spending money to preserve the cultural tradition.  In fact, if I were anything in the world, I wouldn’t object.  Native music is worth preserving all over the world: . In Brazil,  the Philippines. Ireland, everywhere.  So this is . . . “vive la difference” and it’s all worth preserving.  However, working against that is all of the world is interested in international pop, rock and videos, and. . . that’s a reality. I don’t know if we can change it. The best we can do is to try to preserve the diversity.

Yohei : Do you have any questions to us?

Mr. Cahn : How do you plan to use your English? When you leave here, how will you be using your English? How will apply it? What do you intend to do with it?

Yohei : Can I start? For me, I’m planning to use it as a bridge of music between countries. I want to connect. . . I also like to send music, Japanese music, to other countries, and take other countries’ music. That’s why I like world music. I like listening to all the countries’ traditional music, so I want Japanese people to hear a lot about those different cultural music too, but also for the world to listen to Japanese classical music. So I want to use my English for that.

Maya: I’m not going to turn musician after graduating from this school, I will work in. . . Brazilian company in Japan. As he said, I want to make Brazil and Japan closer, like a bridge.

Mr. Cahn : Good for you, and good for Japan, too, Maya.  And I think I would need to use English in Brazil too, because I don’t speak Portuguese,

Maya: So, the important language between Brazilians and Japanese is English, so I think I will use my English skills to that.

Tetsu : When I was in Ireland, I was studying the Irish music, and I wanted to know the culture there. But now, I’m composing for the film, but I’m also singing for a rock band in English. I have a good American friend, and we play together. So I’m using English for that.

Tetsu : Yeah, some people say it’s really strange. But I like it.

Mr. Cahn : But English, it’s really strange, too. I’ll tell you a story. I was traveling with my ensemble, Nexus, and we played a concert in Liverpool in England. And we went to a school to play for students. In context of our program, we were talking about the instruments. And every time one of the members of my ensemble talked to the students, they went, “What?”  So someone had to translate from my English to the students’ English. And then every time the students would talk – they had a very guttural kind of accent – we looked at each other and, “What?” So we were going English to English and we needed a translator. So the same thing can happen with Ireland and Scotland, too. Sometimes I listen to Scottish, which is really closely connected to Ireland but it’s different, and I don’t understand it.

Hana : For me, I don’t have a plan to work as a musician or something that includes music, and I’m planning to work for a Philippine company that has a branch in Japan.

Hana : Yeah. So I want to use my English skills for that work.

Mr. Cahn : Good. That kind of thing is really important today because with the internet, with jet travel, with trade. The world is becoming smaller and flat, and at the same time the differences become more obvious because we have more access to them. But you’re both building bridges, and that’s a good thing. And it’s only the way things are going to continue to go: more, more, and more bridges. Congratulations to all of you.   It was my pleasure to meet you and to get to talk. I wish you all good luck, and maybe I’ll see you next year.  Thank you.

Fumiko Kosai (Associate Professor at the Showa College of Music):  Professor Cahn, thank you very much for being a great help for our students in joining the English interview.  The students really enjoyed it and we truly appreciate your kindness.  You will find the video clips of your interviews with our students at: