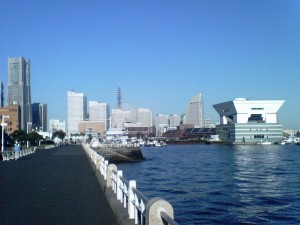 Another mild sunny day in Yokohama and Kaz picked me up at 8:30 for the drive back to Showa.  Yashio stayed in Yokohama to host Mark Boseman on his last day of masterclasses.  He will fly home tomorrow (Tuesday).   The students have really enjoyed Mark’s sessions on Stevens grip and technique, as well as his snare drumming.  The student performances have definitely been helped by his coaching.

On the drive back to Showa there were several fabulous views of Mt. Fuji towering over the horizon.  We got back in time for coffee and a snack before starting the day’s work.  There were six lessons again.

– ETUDES FOR SNARE DRUM # 2 and #3 by Jacques Delecleuse (Sn.Dr. unaccompanied)

I’m now back at the Hotel Molino and it’s starting to feel like the home stretch.  Moments ago I emailed Mark Scatterday who has been at the Kunitachi School and he emailed right back from Narita that he’s already on his way home.  Kaz said that there may be more formal connections in the pipeline between Kunitachi and Eastman, although Doug Lowry’s passing may have slowed things down a bit.

I’m watching Japanese football on TV and even though the game started about 15-minutes ago, there have already been three guys carried off the field with injuries, and about five pass interceptions and two fumbles.  The players’ bodies are not at the 300-pound level, but there’s still plenty of physicality.  Speaking of physicality, I guess I should start doing some kind of snow shoveling preparatory exercises.

Up at 7:30 AM today to do a little more writing on Russell’s project before starting at 10:30 with some of Yashio’s students.

– CAJON  BASICS  (with Honoka and Saki) 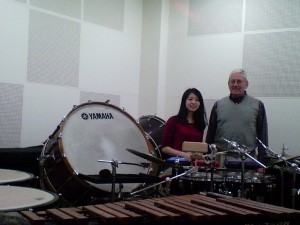 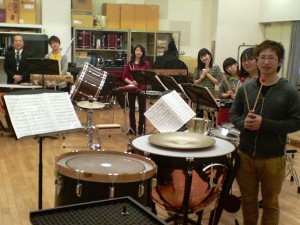 – GENERALLY SPOKEN, IT‘S NOTHING BUT RHYTHM by Zivkovic (Multi-perc, unaccomp.) 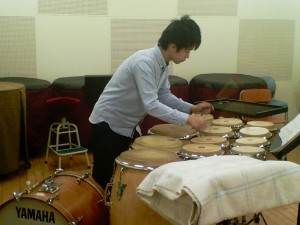 After the sessions ended at 5 PM I went over to the Mylord department store to buy farewell gift chocolates for Kaz, Yashio, Fumiko and Noriko.  Tomorrow will likely end with a gathering of the students and all of the sayonaras and photos.  It’s time to start getting ready for the home fires.

The weather was cloudier and chillier when I woke up at 8 AM, but I didn’t have to leave my room for breakfast, because I still had a slice of pizza and an orange left over in the cooler from last night. I walked over to the school at 9:30 and had my daily cup of coffee from the school snack shop before the first session at 10:00.  Saki and Ryo first played one of the snare drum duets from:

Then two more sophomores joined in and the quartet played:

I joined in on the second run-through playing cajon.  The remaining lessones included:

– PORTRAITS OF A WALTZ by McCormick  (Snare drum, unaccompanied.

For the last lesson of the day Yoshie, Fumiko and I were joined by Kaz, Yashio, Ishiushi-sensei, and Kojima-sensei to hear:

At lunchtime we were joined by Atsuhiro Nakamaru, an alum from prior visits who made a special trip into Showa just to say hello.  After the sessions ended at 5 PM many of the students entered the room for the formal good-byes.  I said a few words of encouragement and thanked Fumiko Iishi for her good work in translating virtually everything for me over the last two weeks.  There was an very nice exchange of gifts, then photos, and then the whole group escorted us to the entrance hall for a final farewell.  Ishiushi-sensei gave me a comp copy of his method book, which I had seen last week and I tucked it into my backpack, because it was raining lightly outside. I had left my umbrella at the hotel so the students rounded one up and loaned it to me for the short walk back to my hotel room.  Kaz, Yashio, Fumiko, Saki, and Honoka met me at the hotel lobby and we all walked (a few yards) to the train station and a very nice Japanese restaurant.

Tomorrow morning at 11 AM, Kaz and Yashio will drive me to Narita for my 4 PM flight.  The weatherman is predicting a little snow tonight, but it should not have any effect on my flight.  As in my visit in 2011, I have consciously tried to savor the precious moments of real communication with students and friends as my keepsakes, because this sayonara to Japan, is very possibly to be for the last time.