The morning routine on Sunday September 12 was different.  Bonnie and Diane left early to spend a day revisiting Kyoto.  I slept until 8:00 AM and instead of going to Starbucks, I walked to a nearby AM/PM convenience store to bring some small snaks and iced coffee back to my hotel room, where I wrote and posted yesterday’s blog.

At noon Russell, Garry, Ryan and I left early to find a place for lunch at the Osaka-Umeda station.  We found a soba restaurant and after lunch we hopped on the train to the hall.  The plan was to greet Yasunori and Sumire at the stage door at 1:30.  On the way to the P.A.C. we passed a music-themed store – with images of Beethoven, Bach and Mozart  over the doorway, and we decided to go inside.   After browsing the jewelry, stationery and other gift items, we continued on to the hall. Yasunori and Sumire arrived exactly at the appointed time and we escorted them to the stage where we had a brief show-and-tell over our Takemitsu instruments.  Yasunori said that Asaka and Maki Takemitsu would also be at today’s concert.  NEXUS had not seen them since the performance of “From me flows . . .” in Boston with Seiji Ozawa in October 2000, and we looked forward to seeing them after the concert.

For the third time every one of the 2000 seats in the audience was occupied as NEXUS made its entrance down the rows of steps to the stage.  Somehow, with our friends and Takemitsu’s family among the listeners, the music took on an added significance, and the performance was even more magical than the two before.  Maestro Sado also sensed it and his phrasing and timing were at one with that of NEXUS as he showed an obvious emotional connection with the music.  The windchimes sang their song at the end, and when the silence was ultimately achieved the audience broke into a spontaneous outpouring of appreciation – with ‘bravos’ and cheers.  I have to say, it was GREAT!

The intermission provided the time necessary for us to come back down to Earth.  All of the NEXUS trunks and instruments were then moved to a large isolated area adjoining the rear of the stage.  At the same time, NEXUS invited Kazu Tsuchihashi to our dressing room and we presented him with gift windchimes and a “Voices” CD.  As the Holst was being performed we were able to pack everything except the windchimes without disturbing the performance. With the instruments packed, we all withdrew to our dressing room and during the remainder of the Holst performance we sat in front of the TV monitor in the room switching channels back and forth between the last few movements of “The Planets” and a sumo tournament, with our own jiving commentary, of course. After the encores NEXUS was greeted with hugs and smiles at our dressing room by Yasunori, Sumire, Asaka, and Maki Takemitsu for some catching up on each other’s lives.  Then it was photo time and we were joined by Sado-san and the orchestra’s percussionists, who presented each member of NEXUS with a small gift bottle of local (Hyogo) sake.  Sado then presented NEXUS with miniature Sado figures – kind of like Japanese bobble-heads; very humorous. Sado invited NEXUS to a post-concert party at the Canteen in the P.A.C. honoring new members of the orchestra.  Each of the new members – a number of whom were Americans – were introduced and each gave a brief statement to the orchestra members.  The (informal) formalities were actually very touching, and I felt privileged to be an observer, and to be able to chat with the new orchestra musicians.  The orchestra is modeled like the New World Symphony in Florida; the young professionals joining the orchestra will only stay for a limited time – three years. 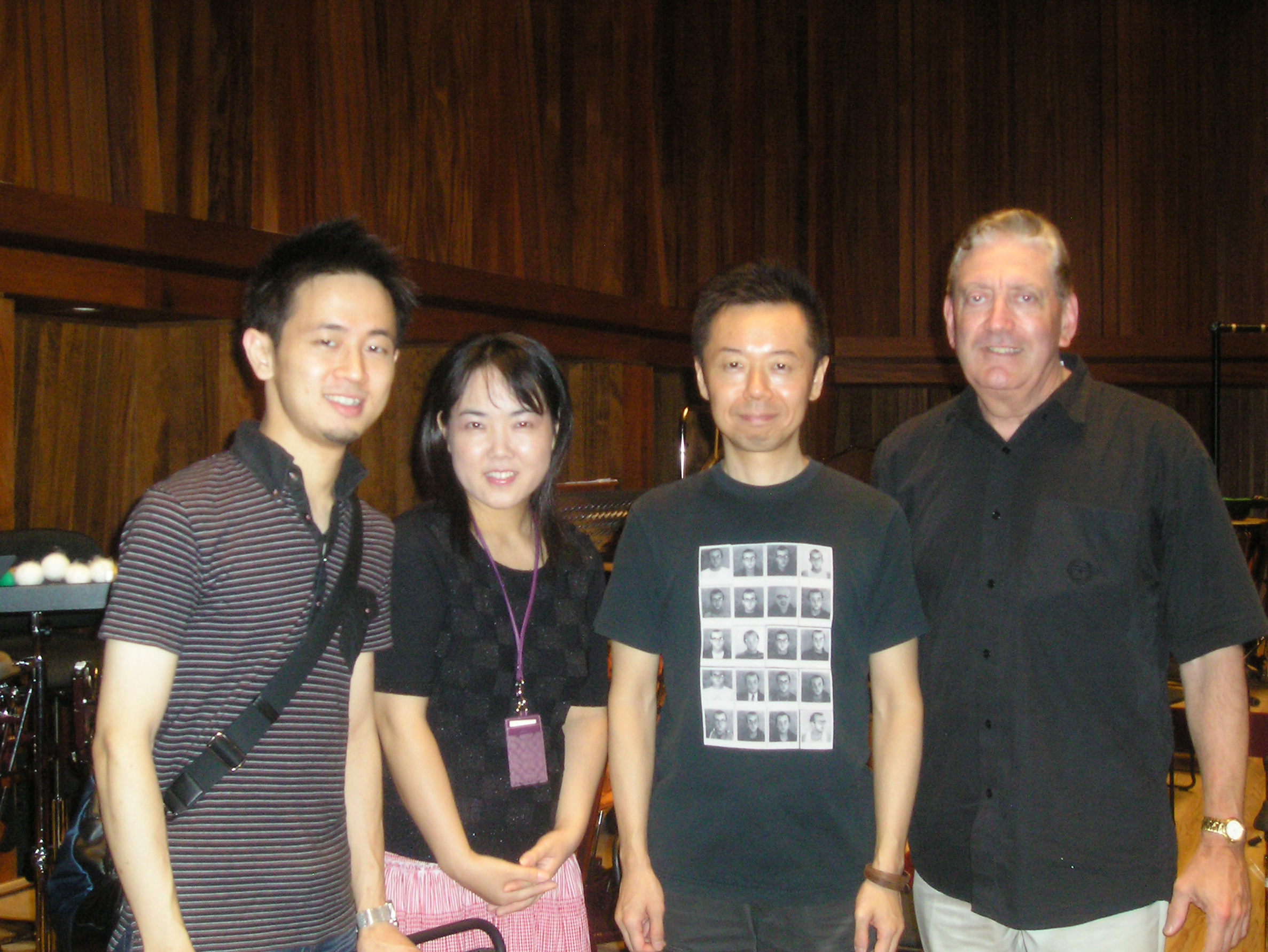 Before leaving the P.A.C. Garry and I made sure that the windchimes were properly packed, and in fact. the crew was waiting for us, because they couldn’t fit the Anklung boxes into the trunk.   Knowing the system, I had the trunk packed and closed in about a minute.  As we stepped outside to head back to our hotel, there were a few people waiting for autographs (they had been waiting for at least an hour-and-a-half – INCREDIBLE!)

Back at the hotel Garry, Diane, Bonnie, Russell and I decided to go to the high-end sushi restaurant in the hotel for dinner.  Ryan wasn’t feeling well, so he didn’t join us.  He had taken a fall while jogging yesterday and had likely fractured a rib.  He carried-on admirably through the last two concerts, but he was clearly enduring a painful situation.  The sushi was fantastic.  There’s ALWAYS something new, and this time it was the raw miniature shrimp, which were actually very tasty.

Tomorrow will be the long flight home – Osaka/Chicago/Rochester.  As the sun moves westward i’ll be flying eastward to meet the very end of the same day at midnight  halfway around the world (assuming that all the connections are made without problems.)

So, goodbye Japan.  NEXUS has had a GREAT trip.   Thanks for reading; see you in future blogs.

Sachi Email sashica@sk2.so-net.ne.jp Website http:// Subject Unforgettable Experience Message Dear Bill san, I was there and experienced the performance on September 12. It was such a great experience. I saw Sado san’s eyes filled with tears when he finally lowered his hands as the echoes finally had gone. What a music! it was well worth a day-trip from Tokyo to Nishinomiya. It was also my first encounter with you Nexus, and am looking forward to the next. Your narratives of the trip, along with the photos, are so much fun to read and see. I am happy to see that… Read more »