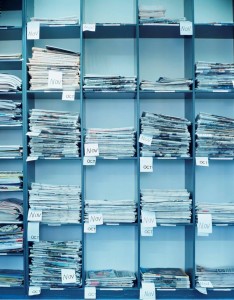 In 1988, Carolyn McMaster of the Lawrence Journal-World in Kansas interviewed Bob Becker. The article describes some of the most important roots of NEXUS. Here are some excerpts:

“In 1984 NEXUS played a memorable concert in Amsterdam – six nonstop hours of pure improvisation. Bob Becker remembers the event as an improvisational high point. The six hours were energizing rather than tiring. But then, the edge of improvisation is what NEXUS….is known for, even if they don’t do many such marathons….

“The percussionists first played together as an unofficial group at the Marlborough Music Festival. Pablo Casals was directing. ‘That was a great experience,’ recalled Bob Becker. ‘We wound up playing a lot on our own, and improvising as well.’ The classically trained percussionists were inspired by those first sessions, and NEXUS was born from the common desire to collect instruments and play them — spontaneously. ‘I think what’s important to our sound is the years we spent improvising,’ Becker said.

“The group wanted to take directions away from the classical or the traditional music, to be able to play the kinds of music that they found interesting. Becker, for example, is quite interested in the music of Northern India; Russ is enamored of the music of Africa from his work with African musicians. ‘NEXUS has been real important to us that way,’ Becker said. ‘We all have our own interests outside of the group and we bring them all to NEXUS.’

“John Cage is one of the group’s favorite composers, as well as Lou Harrison. Both wrote many works for percusion during the ’30s and ’40s. ‘It’s rare to find pieces of that clarity today, so we still play a lot of their music,’ Becker said. …Cage’s 1943 composition, Third Construction, is…full of interesting sounds, is complicated, yet accessible. It calls for odd instruments such as tom-toms, a donkey’s jawbone, lion’s roar, cricket caller and graduated tin cans. ….Becker commissioned Clos d’Audignac, a Bruce Mather piece which uses marimbas, vibraphone, chimes, gong, drum and cowbells called almglocken. ‘In my opinion, there’s a connection between drinking a fine wine and listening to one of Bruce’s pieces,’ Becker noted. ‘You have to wallow in it.’

“…..In 1984 NEXUS was touring with more than 30 flight cases filled with literally hundreds of instruments. Now, escalating transportation costs have forced them to scale back to 17 cases. ‘We’re always interested in repertoire that’s economical,’ Becker said. ‘And that’s a big issue with composers, because in the last 20 years or so, the tendency has been to write for more and more.’ ‘More and more’ means a player may have to shift gears from one set of instruments to another in one piece, playing several instruments during the course of a single composition called ‘multiple percussion setups.’ ‘It’s essentially learning a new instrument,’ he said. ‘You spend a lot of time learning it to play a new piece.’ Yet the cornucopia of percussion instruments makes NEXUS’ options nearly endless as well as a constant challenge, which is why Becker loves the medium. ‘Also, there’s a real physical experience there,’ he said. ‘I think audiences can identify with that. They can see how the sounds are being produced immediately.’