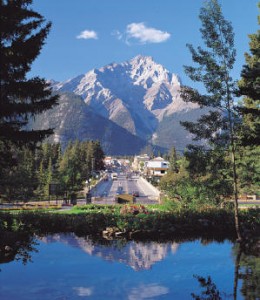 During June 13 through 22, 2009 I took part in the Roots and Rhizomes residency organized by Steven Schick and held at the Banff Centre for the Arts in Alberta, Canada. Banff is located in the heart of the Canadian rockies, and must be one of the most spectacular locations in the world for this kind of event. I have worked and taught at the Banff Centre four times in the past, and it continues to grow and transform. In fact, major construction work on additional new facilities is underway this year.

The festival participants included eighteen students, four faculty (Steven Schick, Anders Loguin, Aiyun Huang and myself), and two resident composers (Mark Applebaum and John Luther Adams). I’ve known Steven, Anders and Aiyun for many years, and the usual percussion camaraderie developed quickly among the students. Mark Applebaum and John Luther Adams are both brilliant, and capable of speaking with great passion and clarity about their work. It was a stimulating and inspiring environment for everyone.

At the same time as the percussion activities, there were also string quartet and piano residencies in progress at Banff. Bartok’s Music for String Instruments, Percussion and Celesta, and Luciano Berio’s Linea (for two pianos, marimba and vibraphone) were natural repertoire choices for the first concert program, which also included the world premiere of Mark Applebaum’s Straightjacket, composed for Steven Schick as soloist with percussion quartet, as well as my piece Mudra.

I was also invited to prepare another of my pieces, Unseen Child, for a performance on a late-evening “cabaret concert” (the performers in Unseen Child were Andy Bliss, Aiyun Huang, Daniel Morphy, Leah Scholes and Jude Traxler). This turned out to be a highlight of the residency, and also included Bonnie Whiting-Smith’s very moving rendition of Frederic Rzewski’s To the Earth, Jude Traxler’s intense performance of Stuart Saunders Smith’s Links 7, Dustin Donahue’s lucid presentation of Vinko Globokar’s classic ?Corporel, Dan Morphy’s delicate rendition of Ray Dillard’s intricate Five on 5, and Sandra Joseph’s and Corinne Rene’s lovely version of Gérard Grisey’s duet Stèle and also Brian Ferneyhough’s Fanfare for Klaus Huber. For me as a composer, the situation at Banff was a real joy because of the luxurious amount of rehearsal time allotted to preparing each piece. This allowed me to work with my ensembles in great detail, and resulted in highly refined performances on a level I rarely experience in university music departments.

Perhaps my most demanding job during the residency was the preparation of a complete performance of Steve Reich’s seminal percussion work, Drumming. The production involved nine of the percussion students, as well as two sopranos and a piccolo player engaged from the professional music community in Calgary. The students approached this piece with great respect, and paid serious attention to details of execution, pacing, mallet choices, and dynamics – all elements not addressed explicitly in the published score. It was exciting to observe the growth in the students’ confidence and authority as they became able to hear, and then explore some of the finer subtleties of this style of music.

The American composer and performer Pauline Oliveros happened to be in residence at the Banff Centre for a few days during the percussion event, and she was invited to coach the students in an impromptu performance of her piece Single Stroke Roll Meditation. Pauline had composed this work for NEXUS in 1973, when the group held a two-week series of workshops and concerts at York University in Toronto. It was an enjoyable surprise to meet her again.

The finale to the residency was an evening concert featuring Ionisation by Edgard Varése, Persephassa by Iannis Xenakis, and the world premiere of Inuksuit, by John Luther Adams. I first met John Luther Adams in 1998 in Fairbanks, when NEXUS was there to perform at the University of Alaska. Coincidentally, I spent a week in residence there again last December, and was quite moved when I visited his very evocative installation The Place Where You Go to Listen, in the Museum of the North. John’s new piece, Inuksuit (an Inuit word referring to the stone sentinels seen throughout arctic Canada and Alaska) is also strongly evocative of nature and natural phenomena, and was performed outdoors by an ensemble of all eighteen students. The piece was reprised the following afternoon at a specially selected location in the provincial park just outside of Canmore, south of Banff. After the first performance I had a brief discussion with John regarding the instrumentation for an outdoor percussion piece. It seemed to me that the percussion instruments that sounded best and blended most effectively with the natural acoustic and soundscape were precisely the same instruments that work best in the symphony orchestra – the bass drum, cymbals, triangle and glockenspiel. He seemed to agree with me, and said he planned to rework the orchestration.

Each faculty member gave a lecture during the residency. Both composers discussed their work in detail, Anders Loguin gave a touching retrospective about the history of Kroumata and its repertoire, Aiyun Huang gave a presentation about the development of percussion and music theater, I gave a talk about some of the ideas in my snare drum book Rudimental Arithmetic, and Steven Schick led discussions about the history of modern percussion technique and repertoire – our roots, and then where we might be heading in the future – the rhizomes that are branching out around the world.