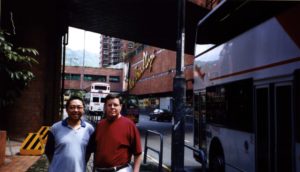 DINING AT THE RITZ    We had a short July trip to Hong Kong and Singapore!  In Singapore we performed again in the Victoria Concert Hall as we had 6 years prior. In Hong Kong we gave a masterclass at the University and performed in Sha Tin Town Hall. Here’s Bill Cahn’s snapshot of Robin Engelman in Hong Kong – Bill shares a memory: “Robin called my hotel room and asked if I’d like to go with him for lunch. I said ‘sure’ and a few minutes later we met in our hotel lobby. We asked the concierge about nearby restaurants, and as soon as he mentioned the 5-star Ritz Carlton, Robin’s ears perked up.  When told that the Ritz was only a short walk away, Robin’s die was cast, and off we went.  The Ritz-Carlton would have been the last place I would ever have selected, but based on a few decades of hanging with Robin, I knew that he would be the perfect person to follow in what, for me, would likely be a new horizon experience. 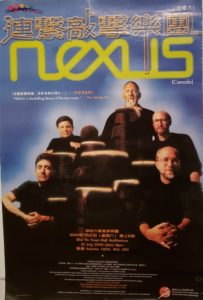 Everything about the RItz-Carlton – including the demeanor of everyone from the porter to the front desk to the Maitre’D, to the waiter screamed EXPENSIVE.  Naturally for me, I felt really out-of-place, but Robin immediately transitioned into “Robin 2-point 0” (the guy I knew on the golf courses – man of the world and master of the universe – including waiters).  Robin struck up a wonderfully casual, yet authoritative, exchange with the waiter as soon as we were seated.  I noticed only one or two other well-dressed people seated at some distance in the dining room, as I, self-consciously, and very casually dressed, abstained from conversation.  In short order Robin (also casually dressed) and the waiter were old friends.  I marveled at the ease and lack of any self-consciousness in their back-and-forth communications as our obligatory glasses of wine were ordered by Robin along with our food.  Even now, I can still recall the feeling of satisfaction – which for me would never have happened otherwise – after our lunch as we returned to our hotel. That’s it; simple but profoundly memorable (as were so many moments with Robin). 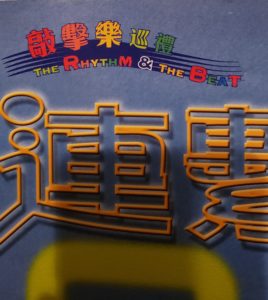 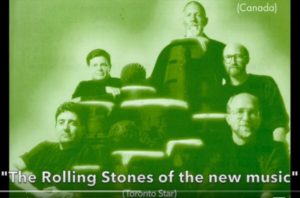 “THE ROLLING STONES OF THE NEW MUSIC” That was our billing in Hong Kong. Here is a fun interview that was done in the city – Some good laughs here. Enjoy! https://youtu.be/mDEbQ-7jUeA 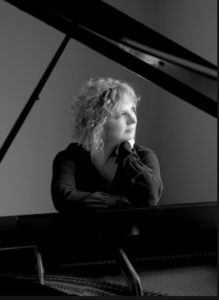 SEA WITHOUT A SHORE  The Nashville Chamber Orchestra commissioned Connie Ellisor (pictured) to create this work for marimba virtuoso Chris Norton, NEXUS and orchestra. On her website, Connie talks about the creation of the piece and provides sound bytes of it. You can also check out the score and read the wonderful reviews. One reviewer said the piece “moved me to my core”: http://ellisormusic.com/compositions/sea-without-a-shore/               With Chris we performed the exciting work 4 times under the baton of Paul Gambill – 3 in Tennessee and one in Danville Kentucky. Before heading home, we also performed solo at PASIC in Nashville to celebrate our 30th Anniversary. Chris appeared this year with the Bob Becker Ensemble playing Bob’s original compositions in Toronto, Canada. 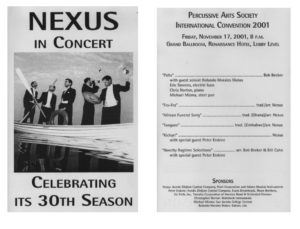 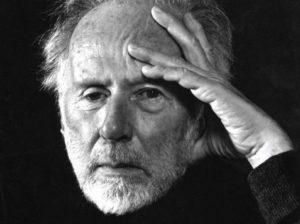 SHADOWMAN    R.Murray Schafer, one of Canada’s most revered composers, was commissioned to write the concerto “Shadowman” for NEXUS and the University of Toronto student symphony orchestra conducted by Raffi Armenian. The work follows a military drummer from youth to old age and death from dementia. We had known and worked with Schafer since our beginnings. When John Cage was asked to name a great music teacher, he answered, “Murray Schafer of Canada.” In 2011 Schafer received the Premier’s Award for Excellence, honoured for his internationally acclaimed “achievements as a composer, educator, environmentalist, literary scholar, visual artist and provocateur”. 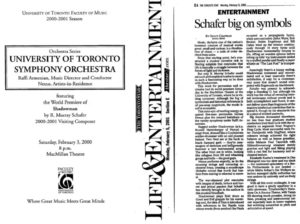 The review called the theatrical “Shadowman” a “mini-epic of bustling energy…Ragged soldier Shadowman (a.k.a. Russell Hartenberger)…is stage front, dressed like a Confederate solder-drummer with an odd plumed helmet. Two Nexi are at the back in black Samurai garb – they’re messengers of darkness and belligerently hammer a vast instrumental array. The other Nexi are in white, looking like refuges from ER and whacking gongs and bells – the good guys. Nexus performs expertly, as do the moaning strings and menacing orchestral brass, creating a soundscape (Schafer coined that word) that hastens from searing to ethereal to surreal.”

Schafer wrote of the piece, “The orchestra accompanies this crusade of courage and folly with a number of tunes from military musical history. In the end, the soldier, mentally deranged, plays a variety of toy instruments and even tries to teach a teddy bear to play a toy drum. The valor and pathos of soldiery is exemplified in the piece, but the anti-war theme is unmistakable throughout the work. To my regret, the work has not achieved the popularity I had hoped for. We need more anti-war demonstrations in music.” 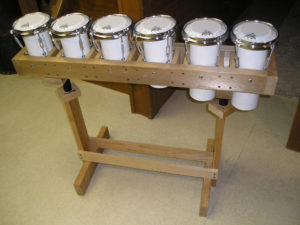 Bob’s part was scored for steel pans as well as vibraphone, songbells and small instruments. As before, Bob had to memorize the music as he had done for all his steel drum parts. Bill’s part was scored for 6 boobams tuned G1 to E2. He didn’t own any so he built his own, which you can see in the attached photo and read about in his blog post “Instruments You Can’t Buy”: http://bit.ly/3rdUNGz 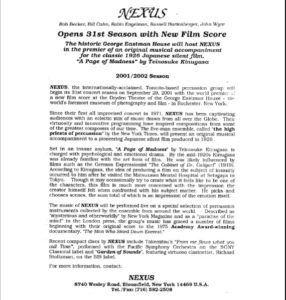 A PAGE OF MADNESS   The historic George Eastman House in Rochester NY – the world’s foremost museum of photography and film – hosted our premiere of an original musical accompaniment for the ground-breaking 1926 Japanese silent film “A Page of Madness” by Teinosuke Kinugasa. It had been thought lost in a 1950 studio fire. Considered a masterpiece of Japanese film, the plot concerns a retired sailor who hires on as a janitor at an insane asylum to free his wife, who has been imprisoned there after attempting to kill herself and her baby. Acted by an avant-garde theater troupe, the hour-long drama employs distorted, stylized images, flashbacks, and quick cuts, showing the world as it is seen by the insane. Bill Cahn created the live musical score utilizing a rediscovered copy of the film. We went on to acquire our own copy. Kinugasa originally intended a percussion accompaniment for “A Page of Madness”; Bill’s score enhances the mystery and rhythm of the film’s bizarre images, and has been praised as a perfect parallel to the film’s unique vision.

Mariann Lewinsky, a Swiss film historian and expert on A Page of Madness says: “All silent films should be screened with music. Good music can give a unique experience… Modest music, if unobtrusive, can help a lot…Bad music destroys a film. I have seen ‘A Page of Madness’ with all…three options, the worst being a free jazz improvisation by people who have no idea about silent film, nor about what is going on in this particular film, or why, and simply took it as a pretext to go wild. ‘It’s a wild looking film, so let’s do a wild free-for-all music spree!’ ”

Apparently an electronic accompaniment at a Silent Film Festival caused a mass walk-out by purists in the audience! NEXUS has never suffered that fate! Kinugasa was the first director in Japan to treat cinema as a distinct art form. As Midnight Eye says: “A synopsis of the plot can’t begin to explain the power of the film, nor the audacity of its vision. A stunning invocation of the world as viewed by the mentally ill,… bowls you over with a barrage of startling images utilising every technique known to filmmakers of the time. Even now, Kinugasa’s film seems…fresh…and…eye-popping.”        Read more about this intriguing film at http://www.midnighteye.com/features/a-page-of-madness/ 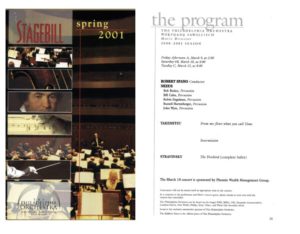 NEW MUSIC IN OLD HALLS   In March through May, a round of workshops and concerts interspersed with 7 important performances of the Takemitsu concerto with the Philadelphia, Cincinnati and Seattle Orchestras took us from Arkansas and Louisiana, through Philly, Georgia, South Carolina, Kentucky, then up to Cincinnati, over to Washington State and home via Wisconsin!

The maestros for the Takemitsu were Robert Spano (Philadelphia), Junichi Hirokami (Cincinnati) and Gerard Schwarz (Seattle). Schwarz had spearheaded the building of Seattle’s newly-opened Benaroya Hall where we played – a technologically-advanced hall that floats on rubber pads. The block around the hall has been named Gerard Schwarz Place. In Cincinnati we played the 125-year-old Music Hall. It has the “acoustical ability to project sounds” and much has been made of its resident ghosts. We did not encounter any. In Philadelphia, the interesting maestro Robert Spano had been getting a lot of attention and had recently been announced as music director-designate for the Atlanta Symphony. Ours was one of the last performances with the orchestra in the 145-year-old Academy of Music before they moved to the new Kimmel Centre. Bill Cahn hosted a reception after the performance. 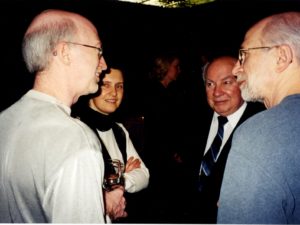 A  PHILADELPHIA RECEPTION  When we performed with the Philadelphia Orchestra in March, ours was one of the last performances with the orchestra in the 145-year-old Academy of Music before they moved to the new Kimmel Centre. In high school Bill performed in the Academy several times, one being the Philadelphia Orchestra Young Person’s concert with the Settlement Music School Percussion Ensemble conducted by Alan Abel. (Russell was a student at the Curtis Institute at that time and was also involved with the Settlement Music School). After our final 2001 concert, Bill hosted a reception for the Orchestra’s percussionists, his former high school music teachers (retired by then), and other high school friends – It was like a 40th reunion! The group photo shows Robin Engelman and bill with their high school teachers. Standing with Robin is his band teacher. Seated (L-R) is Laura Giamo (high school choral, theory), Joseph Huttlin (Bill’s 1st drum teacher), Bruno Rondinelli (Bill’s junior high band director).  The “duo” photo is Michael Bookspan and Don Liuzzi (Philadelphia Orchestra’s percussionist and timpanist respectively). The “quartet” photo is (L-R)  Bob Becker, Debbie Waugh (Russell’s former University of Toronto student and author of her Doctoral thesis “NEXUS: Integrating Musical Traditions”), Alan Abel, and Russell Hartenberger. 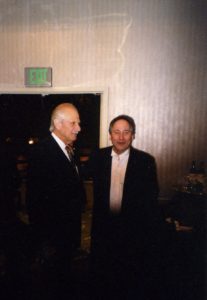 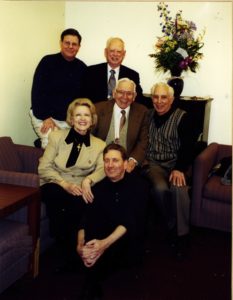 FRED “DAN” HINGER   In January 2001, the music world lost Fred “Dan” Hinger, and the March issue of Percussion News carried John Wyre’s beautiful tribute to him, saying “Dan’s influence on Bill Cahn, Russell Hartenberger and myself has made him a major part of Nexus. He inspired us to pursue our dreams, and indeed we have.”