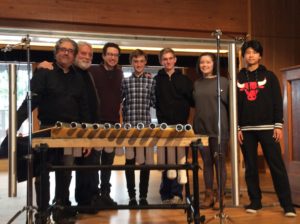 Those were the words given to us by our “high school” orchestra conductor, Thor Johnson, when we were playing a difficult new work by a Japanese composer in the mid-1960s. If you say each word on four beats, fitting the syllables equally in each beat, it helps create a rhythm of 2 + 3 + 4 + 1, which was tricky for a 65-piece orchestra of teenagers to play in unison as required by the score. At the Interlochen Arts Academy, we played a full orchestral concert every Sunday afternoon of standard and contemporary music. It was an amazing experience that I still marvel at 50+ years later. I recently returned to Interlochen in Northern Michigan, where I had spent three years in school from 1964–1967. While the people there now are different and there are many new buildings, the spirit remains. I met many young, passionate students of music who reminded me of my schoolmates back then. Not all of them will pursue professions in the arts but all of them will prosper from the artistic and academic environment in which they are currently immersed.

The reason for my visit was to attend a recital by the percussion instructor Keith Aleo. Keith is an accomplished percussionist, inspirational teacher and, in his free time, an Educational / Orchestral Consultant for the Avedis Zildjian Company. My special interest was to hear the instrument I built for his performance of Lou Harrison’s Solo to Anthony Cirone. Lou Harrison is an inspiration to all percussionists who have played his music or read his writings about music. He often wrote for non-Western instruments and was greatly influenced by the gamelan music of Indonesia. This piece calls for 12 metal pipes, which are tuned using an ancient system. It requires the performer to build or acquire specific notes that are not the same as the scale we know on the piano. I was thrilled with the sound of the instrument, played beautifully by Keith, which I call “Lou’s Tubes.”

While I was there, I had the pleasure of presenting a workshop to the percussion students, sharing my work with American composer Steve Reich and various other percussion groups, as well as my background in instrument design. These students have an intense hunger for knowledge. They get it! Coincidentally, Rob Dillion of the Grammy Award-winning Third Coast Percussion group, was there at the same time, coaching the students for a few concerts this spring featuring the music of Steve Reich. Rob is a great player and excellent coach. I thoroughly enjoyed watching these young players rehearsing pieces that weren’t even written when I was a student at Interlochen. This is very difficult music but this is no ordinary high school! They are doing an exceptional job, and it is encouraging to see young people devoted to learning and eager for experience in the fine arts.