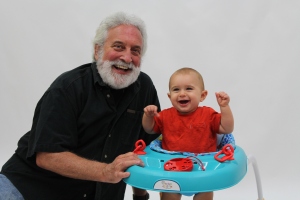 Those are some of the lyrics from “My Generation,” recorded by The Who in 1965. I still am not quite sure what The Who was saying but it was a significant song of my generation. I was 15 when this song was released and it took another 15 years before I helped produce my next generation, daughter Tasa, with my wife, Diane, doing most of the work. Tasa has recently produced the next generation, Lucca, with help from her husband Rob. Luckily, I did not “die before I got old,” as the lyrics go, since it’s too late for that. I am very happy to be around to enjoy our first grandchild.

Tasa and Lucca visited Diane and me last week and we got together for a few photos with Lucca enjoying one of the kid’s instruments we produce, the Woodstock Mini Jambourine™.

Lucca and the Mini Jambourine

Lucca just turned 10 months old and the Jambourine is one of the few musical instruments made for kids of any age (as long as they’re at least 8 months!). It not only sounds and looks cool, it apparently tastes good too.

There is a drummer in this child (him) and a child in this drummer (me).

Lucca loves music, and sings, dances and claps whenever he hears his mom and dad perform their popular Tasa and Rob shows at their local venues.

I am hoping that his generation will keep music alive and continue the effort to make world peace a reality.

Click here for a video of Tasa, Rob and Lucca!