When my touring schedule permits, I often play in the percussion section of the Hamilton Philharmonic Orchestra. Hamilton, Ontario is a thriving city about 70 km southwest of Toronto. The HPO is a fine orchestra with a long history. The original Canadian Brass was formed by members of the orchestra’s great brass section in 1970.

Last week’s program was titled “Sea to Sea”, and featured four thematically linked works – Mendelssohn’s Calm Sea and Prosperous Voyage, Britten’s Four Sea Interludes, Sibelius’s suite from The Tempest, and Debussy’s La Mer. I played cymbals in La Mer, and most of the percussion parts in the Britten, which included xylophone, snare drum, tambourine, chimes and tam tam. Our excellent guest conductor for this concert was Jean-Philippe Tremblay. He knew the music thoroughly, and was very enjoyable to work with. Following the concert a number of professional and student percussionists who had been in the audience came onto the stage to see and discuss the instruments I used in the Debussy.

The cymbal part for La Mer is unique in the orchestral percussion repertoire, and there is no precedent in classical or romantic orchestration for the kind of conception and notation applied to “cymbales” throughout the piece. The music demands an imaginative approach to instrument selection, sound production, articulation and dynamics. I like to go even further with the part and include pitch choices. My selection of cymbals for the HPO performance totaled eight instruments, including one pair specifically for the three notes in the third movement with the indication “Les 2 CYMB.” (prior to this instruction the entire part simply gives “CYMB.” for every note). 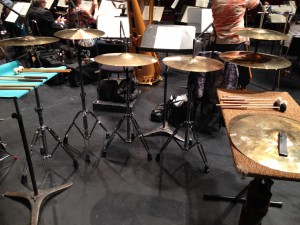 From left to right:

Each cymbal was selected to be used for specific places in the part. The pitches Db and F# are central to the harmonic structure of La Mer, and I try to reinforce the orchestra’s pitch, as well as its sonority, at certain points. Having a large selection of instruments like this available also provides the option of choosing particular cymbals, or combinations of cymbals, “on the fly” so to speak. It’s really a form of improvisation – something not usually associated with an orchestral context. Even though I have thoroughly detailed every note in the part as to particular cymbal, striking implement, dynamic, articulation, damping and sometimes pitch, I still enjoy following the sounds of the orchestra in real time, allowing my ear and imagination to guide my playing. In fact, for better or worse, that’s the way I play music in any context. Fortunately, this time the conductor went along with everything I did.

The range of dynamics and articulations in the part, and the types of cymbals chosen, require a variety of mallets and beaters. Sometimes the part itself is specific, as for example the indication “avec la mailloche”, which occurs in the final and climactic section of the work. I use a very heavy bass marimba mallet as a mailloche (an ambiguous term, but implying a large mallet of some kind) – something that can give a massive sound on the big 21” K. Other mallets I use in the piece include the RAM suspended cymbal mallet line made by Ron Snider of the Dallas SO, solid felt timpani mallets on bamboo, a triangle beater, and a pair of large nylon-headed xylophone mallets used to articulate the flams in the third movement. It’s important that the grace notes in these figures be heard clearly, as the appoggiatura effect is motivic throughout the orchestra in La Mer. 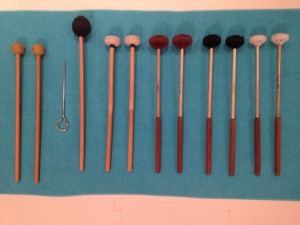 From left to right:

[…] and Chloé in Claude Debussy’s La Mer (1905). [See my previous blog regarding the cymbal part in La Mer.] There are many similarities in the notation and indications for instruments and mallets in the […]

Hello, I have greatly enjoyed your articles on cymbals. Is there anywhere that I can still purchase Ram mallets? Your help is greatly appreciated.