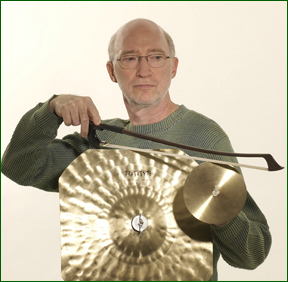 Percussionists who perform in symphony orchestras form a relationship with their instruments that is esoteric, often arcane, and little understood by other musicians and the general public. Although most people have seen and heard cymbals, gongs and bells, for example, very few have had the experience of listening to one of them intimately and intently over a period of time. Percussionists, of course, do this constantly, and as a result usually develop an intense personal awareness of the many subtleties of those types of sound often categorized as ‘noise’. When, usually after a long wait, a percussionist stands up in the rear of an orchestra and performs a single crash on a pair of cymbals, the audience may hear a short splash of color. What the performer hears is considerably more compelling – something that may be, perhaps, as rich and engrossing as a musical composition itself.

I currently present a clinic titled The Magic and Mystery of Cymbals. The clinic is very subjective – based on my personal taste and experience, which does not include years of playing in a symphony orchestra. It’s always fun for me, because in the clinic I can play all of the repertoire the way I want, without having to answer to a conductor. Also, the clinic is not meant to be dogmatic – neither concerning orchestral auditions, nor stylistically correct or historically accurate interpretations. The concepts that I describe, however, do apply to approaching percussion performance in general – and not only on cymbals – in a creative and engaged manner. My hope is that students will find some of these ideas stimulating or provocative and that they will be inspired to experiment and listen more closely to their instruments.

1) Cymbal parts, especially in the orchestra repertoire, are often misleading and almost always ambiguous in relation to notation, dynamics and instructions (including the names of instruments and striking implements). Happily, this ambiguity encourages the performer to be an imaginative and creative interpreter. Many times, however, it also requires the player to be a detective, an historian and/or an inventor.

2) Each cymbal and each cymbal player is unique, and no composer or orchestrator can precisely predict the sound that will result from a given notation. The composer’s job (as orchestrator) is to imagine, select and notate the general types of sounds appropriate to the emotion, form and structure of the music they write. The performer’s job is to create, in real time, specific sounds based on the composer’s notation and the perceived music as it unfolds during a concert.

3) When playing cymbals – or any other instrument – in an ensemble, it is valuable to remember the following two important performance concepts (to quote two great orchestra percussionists):

“The four most important words in orchestral playing are: Make The Part Fit.”
– Alan Abel

“Play with what you hear.”
– Robin Engelman

The English word cymbal is derived from the Greek kymbos, meaning ‘vessel’ or ‘bowl’. The French word cymbale and the early Italian cembalo obviously derive from the same root. The German word Becken also means ‘bowl’ or ‘cup’, and is derived from the Latin baccinum, meaning ‘basin’ or ‘tray’. The etymology clearly points to an historical connection with ancient bronze drinking vessels – cups and bowls. Both the German word Teller and the more modern Italian word piatto mean ‘plate’ or ‘tray’, and are simply descriptive references. Among English-speaking percussionists, the word plate is also often used as a term for the instrument.

A Brief History of the Modern ‘Turkish’ Cymbal

Around 1600 AD an Armenian metalsmith named Kerope migrates from the Black Sea coast to the city of Constantinople to work as Chief Cauldron Maker for the Ottoman Palace. Later he also begins producing cymbals, and in 1623 establishes the first Turkish cymbal factory when his son Avedis I discovers a method for making a special bronze alloy of 80% copper and 20% tin. Avedis I is given the name Zilciyan (literally ‘family of cymbalsmiths’, from the Turkish zilci meaning ‘cymbalsmith’ with the Armenian suffix yan/ian denoting origin or family). Cymbals at this time are made primarily for use by the military – particularly in the bands, called mehter, associated with the Turkish sultan’s personal guards, known as janissaries.1 Mehter bands remain in existence until the official disbanding of the Corps of Janissaries in 1826. In 1851 a world-wide marketing push is begun by Avedis Zildjian II, with travels to various industrial exhibitions throughout Europe. By 1865 the family cymbal manufacturing business, now called K. Zildjian & Cie, is managed by Kerope II, who continues promoting Zildjian cymbals at exhibitions in Europe and the USA from around 1873 – 1893.2

Although directions, without notation, for cymbals to be included in triumphal processions and other staged pageantry are found in opera scores as early as 1680, the first notated use of cymbals in European orchestral music is in Gluck’s opera La Rencontre imprévue (1764). Mozart’s opera Die Entführung aus dem Serail (1782) and Haydn’s Military Symphony (1794) are later examples, both of which make reference to Turkish military janissary music, well-known in Europe by that time. Hector Berlioz (1803 – 1869) is credited with the introduction of ‘suspended’ cymbals in the orchestra. This, and the extensive use of paired cymbals by major composers such as Rossini (1792 – 1868), Verdi (1813 – 1901), and Richard Wagner (1813 – 1883), leads to the inclusion of cymbals as indispensable orchestral instruments by the great master orchestrators of the Romantic, Russian and Impressionist styles during the late 19th and early 20th centuries. The development of the drum set during the early twentieth century, and its eventual use throughout jazz and popular music, leads to the explosive increase in the variety of sizes, weights and designs of cymbals available today from numerous manufacturers based in Canada, the United States, Europe and Turkey. Manufacturers, particularly those in North America and Europe, currently make use of sophisticated modern tools, machinery and control methods to create types of cymbals not possible with previous traditional technologies.

1 The mehter bands consisted of zurnas (double reed instruments), trumpets, double kettledrums, bass drums, cymbals, triangles and jingling crescents, and were capable of creating music of great volume and intensity. This sound served to inspire and encourage the janissaries in battle while at the same time frightening and confusing the enemy. During the mid-eighteenth century bass drums, triangles and cymbals were adopted by the European ‘Feldmusik’ military bands. However, these ensembles were purely ceremonial and never employed in battle, which, by that time in Europe was the arena for military (snare) drums and fifes. By the end of the 18th century, mehter-style bands, often with black North African musicians hired to play the percussion instruments, had become an integral part of royal military pageantry throughout Europe and England.

2 Turkish/Armenian cymbal-making follows a very complex political and family history after this time. In 1908 Avedis Zildjian III migrates to Boston, USA. The Turkish Republic is established in 1923, and in 1930 the name of Constantinople is officially changed to Istanbul. Around 1926 Aram Zildjian signs an exclusive American distribution agreement for K. Zildjian cymbals with Fred Gretsch Co. Around 1928 Avedis III and Aram Zildjian begin manufacturing cymbals outside of Boston, and the Avedis Zildjian Co. is formed in 1929. In 1968, K. Zildjian Co. and all European trademarks are bought back by Robert Zildjian on behalf of the Avedis Zildjian Co., and the factory in Istanbul is shut down entirely. In 1981 Robert Zildjian breaks with brother Armand to form Sabian Ltd., based in New Brunswick, Canada. In the early 1980s two former workers for the now defunct K. Zildjian Co. form a new Turkish cymbal-making company called the Zilciler Kollektif and begin marketing a line of cymbals named ‘Istanbul’. In the 1990s another Turkish company named Bogazici Zil begins marketing a line of cymbals called ‘Bosphorus’.