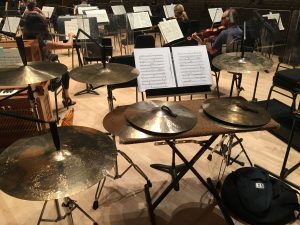 Last week (on June 2nd and 3rd, 2016) the Toronto Symphony performed the complete music from Maurice Ravel’s ballet Daphnis and Chloé (1912). I was invited to play cymbals, which have an extensive individual part that is twelve pages long – something unusual in the symphonic percussion repertoire. I was familiar with the second suite from this work, having played the glockenspiel part several times in the past, but I had not heard previously the entire ballet nor seen the full cymbal part.

Daphnis and Chloé is a ballet in one act and three scenes, described by Ravel as a “symphonie chorégraphique” (choreographic symphony). There was no dancing included on the TSO concert, but the score does call for a full chorus, performed here by the Toronto Mendelssohn Choir under Noel Edison. Our guest conductor for the concert was Juanjo Mena, currently chief conductor of the BBC Philharmonic in Manchester, UK. His fluid and emotional conducting style suited the impressionistic character of the work well, and was very enjoyable to play with. 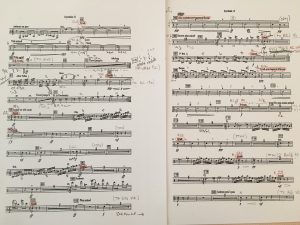 The piece is nearly an hour long, and is truly a concerto for orchestra. Every section is called on to play virtuoso passages, and Ravel’s astonishing skill with orchestration is evident at every moment. There is some precedent for Ravel’s use of cymbals throughout Daphnis and Chloé in Claude Debussy’s La Mer (1905). [See my previous blog regarding the cymbal part in La Mer.] There are many similarities in the notation and indications for instruments and mallets in the two works, which resulted in my using a consistent approach to developing an interpretation and execution for both cymbal parts.

A major difference between the two parts is the much greater use of paired (a2) cymbals in the Ravel. Debussy gives the indication “Les 2 CYMB.” only once in La Mer ­– for a three-note passage in the last movement. Ravel explicitly requires constant changing back and forth between cymbals a2 and suspended. My setup for Daphnis reflects this challenge, with two pairs of crash cymbals stationed on a padded table directly in front of the player, and four suspended cymbals placed at various points around that central position. In addition, a stick tray is placed to the player’s right to accommodate the variety of mallets and beaters required to produce the colors and dynamics I hear for this music. In a manner similar to Debussy, Ravel sometimes (but not always) notates specific striking implements: “Cymb. avec baguette”, “avec baguette de Timb.”, “Une cymbale avec baguette d’éponge”, “Cymb. avec mailloche”, and sometimes merely “Cymb. baguette”. However, most passages are notated simply “Cymb.” or “2Cymb.” “2Cymb.” is, of course unambiguous, but “Cymb.” occurs with both short and long single notes, as well as notes with a trill marking. In fact, on the first page alone this indication is used for a long tremolo on a suspended cymbal as well as a fortissimo crash (almost always performed with a pair of hand cymbals). There is great ambiguity in this approach to notation, which I find very enjoyable to interpret. My response is to go with my ear and musical imagination – as much as with the notation – when choosing specific cymbals and beaters for every passage. The only constraint on this approach is the conductor, who, of course, has the final say. During rehearsals for the piece maestro Mena spoke to me only once, asking for more sound and a more substantial crescendo in the fabulous climax to the dawn scene (also included in the second suite). Any cymbal player is happy to get a request like that, and in response I slightly changed my execution using the two largest suspended cymbals. I had been starting the passage using a single cymbal, adding in a second very large one after two measures. For the concerts I began right away using both cymbals, and I also used a heavier pair of mallets. I got the usual cringes from the string players in front of me, but I also received a very satisfying smile of appreciation from the conductor.

My setup includes the following Sabian cymbals (shown in the photo from left to right): 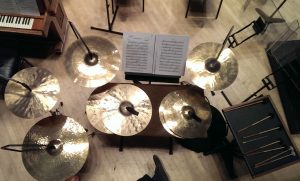 Mallets and beaters (shown in the photo from left to right): 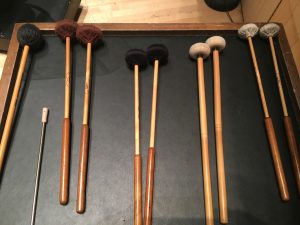 This part is far too elaborate for a detailed discussion in a blog (in fact, it could be the basis for a comprehensive book about how to play cymbals), but I’ll just point out a few things regarding the mallets and beaters listed above. A bass marimba mallet is used as the “mailloche”, which is an ambiguous French term implying a large mallet or hammer (a French synonym is “marteau”). In both La Mer and Daphnis the indication to use a mailloche is given only once and for a single note; however, in La Mer the note is fortissimo, and played at the absolute climax of the piece near the very end. In Daphnis the note is pianissimo and comes at the culmination of a delicate solo violin diminuendo. In both instances I use the bass marimba mallet on a large (21 inch) heavy cymbal, and simultaneously also strike a second cymbal. In the Debussy it is another large (19 inch) cymbal, whereas in the Ravel it is a much smaller (16 inch) high-pitched one. The resulting sounds could hardly be more different, but each contributes a fantastic color to the orchestration at a vital point in the music.

The triangle beater is a simple metal rod, 9 X 3/16 inch, with a 1 and 1/8 inch strip of moleskin wrapped in three layers around one end. I have gotten a lot of use out of this kind of beater, both singly as used here, and in pairs. Hitting the metal portion on a thin cymbal gives a sharp metallic attack that is easily controlled, and the moleskin-wrapped end gives a sound very similar to a yarn mallet, even at forte, if played at the very edge of the plate.

The solid felt timpani mallets are sticks I was given many years ago by a timpanist in Hannover, Germany. I didn’t care for the way they sounded on timpani, but I discovered they are quite amazing on suspended cymbals, with almost no attack sound. I can’t prove it, but I believe something like this type of mallet is what early 20th century composers meant when they wrote terms like “baguette de Timbales” or “Paukenschlegel” in suspended cymbal parts. Modern soft-felt timpani mallets on bamboo or wood handles usually make an inferior sound on a cymbal, and so most contemporary players substitute yarn marimba or vibes mallets, or other dedicated yarn cymbal mallets (like the RAM mallets in my list). I have gotten many custom versions of solid felt mallets from various mallet makers, including Kolberg in Germany. The most recent, and closest to the original, was developed in collaboration with Jeff Luft (of Luft Mallets). The shafts on these mallets are not bamboo, but a synthetic material called Innegra.

The RAM suspended cymbal mallet line was developed by Ron Snider of the Dallas Symphony. The heads are disc-shaped and wound with yarn, and the handles are two-step wooden shafts.

Thanks Bob. I enjoyed this. Bill