During the week of February 14, 2010 I made visits to two schools in the University of Wisconsin network – UW Stevens Point and UW Madison. I was lucky with the weather as I had to connect through Detroit going and coming back, and at this time of year in the northeast, the more airports involved, the greater the chance of a delay or cancellation. I was able to arrive on time at Wausau Airport, and depart on schedule from Madison – along with all of my baggage!

I spent two days in Stevens Point with Bob Rosen and his percussion department, teaching ten lessons and presenting a xylophone clinic. Private teaching is not normally part of my routine when giving clinics and concerts, but I enjoyed working with the UWSP students on a really broad spectrum of instruments, styles and repertoire. 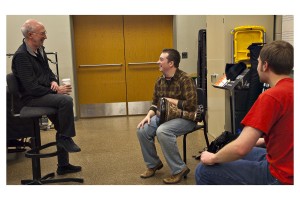 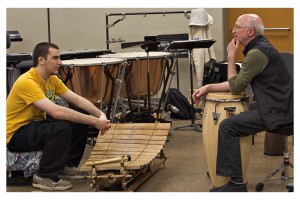 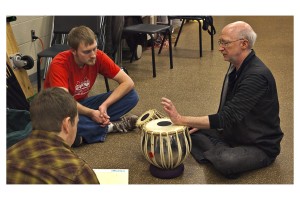 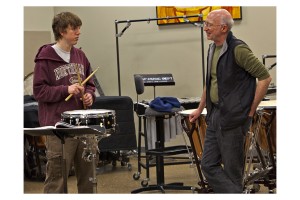 It was also a nice opportunity to get to know Professor Rosen. Even though he and I are contemporaries, we had not met previously except in passing. Bob Rosen is second from the left in the photo below, taken after the clinic.

An old friend and tabla colleague – Todd Hammes – signed on to drive me from Stevens Point down to Madison, where he is presently finishing work on his DMA. Todd is first on the left in the above photo. I was happy to be able to spend some time with him again.

My residency at UW Madison was hosted by Tony DiSanza, and included a masterclass, a lecture-demonstration about the music of Steve Reich, and an ambitious concert of my compositions, including Turning Point, Cryin’ Time, Unseen Child, Mudra and Away without Leave. Also included were two of my medley arrangements, Whispering and States.

The masterclass was interesting and enjoyable, because of both the high level of performance and the repertoire choices. Two pieces were new to me – Frederic Rzewski’s Fall of the Empire, played by Kyle Davison; and Steven Mackey’s See Ya Thursday, played by Megan Shieh. Also included were G. H. Green’s Valse Brillante, played by Joe Murfin; Joseph Schwantner’s Velocities, played by Patrick Coughlin; Mike Udow’s Etude XVI, played by Hillary Barnes; and Alice Gomez’s Mbira Song, played by Elena Wittneben.

Although I had only one rehearsal with the students prior to the concert, it was easy and fun to play with them since they had prepared all of the music very well. It was a special treat for me to hear a performance of Cryin’ Time, a difficult work with a challenging part for soprano voice. This is a piece that needs serious ensemble preparation, and I decided that students should play all of the parts so they could rehearse together well in advance. However, I was able to coach two rehearsals prior to the concert – mainly to help adjust balance and articulation. Pianist Jonathan Kuuskoski, marimbist Megan Shieh, and vibist Ian Disjardin, played with elegance and assurance. Soprano Jennifer Lien brought a lovely voice and powerful interpretation to the solo part.

Since my piece Mudra was on the program, I had to contend with the question of what drum to use for the rather soloistic part I play. When I composed the piece, I wanted a drum sound that could articulate rapid, rudimental figures, but still make reference to the less aggressive, tonal sound of North Indian drums. I finally settled on a standard snare drum with the bottom head removed and a mute placed under the batter head. I usually prefer to bring my own prepared drum for performances of Mudra, since I’m familiar with its sound and feel, and I know it’s tuned properly (specifically, to A natural). Around ten years ago, at my request, a drum was specially made to my specifications by Pearl. It has a 6″ X 14″ solid-maple shell, with no bottom lugs or hardware, and it really projects strongly. The “preparation” has to do with the mute – a ring of foam held against the head from below. Recently I have been using a product from Remo called a “Muff-l”, which holds the foam in a plastic tray suspended over the shell before mounting the head. The drum is shown upside-down in the photo below. 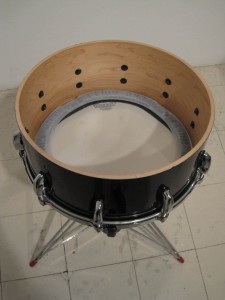 On this trip, I was already carrying a suitcase and my cymbal case with the six cymbals needed for Unseen Child. To save on excess baggage charges, I had planned to bring only a head and mute to put on one of the Madison percussion department’s drum shells. Fortunately, Todd had recently played Mudra on a recital, and he generously allowed me to use the drum he had prepared for himself (pictured below). The only change we made was to replace the Renaissance head with a regular Ambassador. It sounded great. 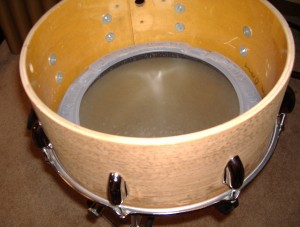 Since I’m discussing equipment, I’ll give some information about the cymbals I used on this concert. My set-up for Unseen Child includes five Sabian cymbals and one Wuhan Chinese (far left in the photo below). 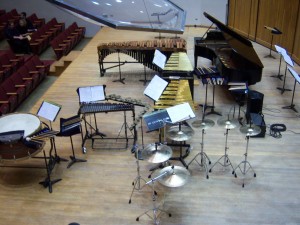 Next to the Wuhan is a custom-made 20″ sizzle, which is one result of some development work I did at the Sabian factory in Meductic, NB around eight years ago. Besides the sizzle prototype, we also created the Becker Bowing Cymbal, which is still produced and available from Sabian. In my opinion, the sizzle concept worked out great as well, however, a number of manufacturing challenges made it commercially unattractive for the company. Besides the profile of the cymbal itself, an important aspect of my design is options for the number and placement of the rivets. It was interesting to notice how rivets placed in different positions along the radius of a cymbal respond to different amplitudes and partials of vibration. After some experimentation, I settled on an outer ring of ten holes, and an inner ring of three, allowing for a very large number of possible arrangements. In addition, I discovered that the world of rivets is large and varied, both in terms of sizes and also materials (brass, copper, steel, plastic, etc.). Originally, I had designed a rivet with a removable collar, so it could be installed or removed easily from any position on the cymbal without the use of a tool. I wanted it to be made of cymbal brass, but that proved to be an obstacle too. Finally, Sabian abandoned the concept, but I got some fine cymbals in the process – so I was still happy. I now own dozens of different types and sizes of rivets, including my original desire – some made of cymbal brass, which I later found were already being produced by a Turkish company. The photo below is a close-up of a prototype with rivets arranged for the part in Unseen Child. 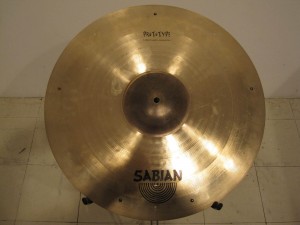 There is only one moment in the entire piece when a sizzle is used, and it is a very delicate accompaniment to soft tremolos on the metalophones. I needed a cymbal that would speak instantly, and be sustainable with a continuous and even sound in pianissimo. The rivet set-up above worked best for this application. The five outer rivets are medium-size brass, and the three inner ones are small and made of steel. You can hear this cymbal, as well as the others pictured above, played by Garry Kvistad in the performance of Unseen Child on the NEXUS CD Wings.

The remaining four cymbals in the photo are very thin 19″, 16″, 15″ and 14″ from Sabian’s “Evolution” series. Large splash cymbals are not marketed by Sabian, but they can be made – although with difficulty. Happily, Sabian agreed to produce a number for me in every size from 14″ up to 19″, and I’ve gotten a great deal of use out of them. I’ve been fortunate to have a professional relationship with the Sabian company for over twenty years, and in fact, they helped sponsor my visit to Madison this time. Many of the cymbals that I use regularly in chamber and orchestra concerts are unusual, and in some cases unique, and I would not have access to these wonderful sounds without the creativity and support of this visionary company.

Below are photos of Unseen Child in rehearsal and Mudra in concert in Mills Concert Hall. 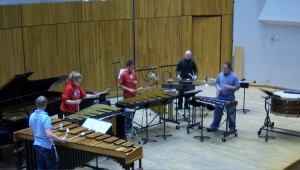 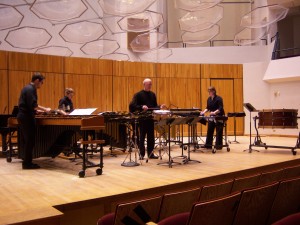