The NEXUS concert in Kitchener, Ontario on June 13, 2014 was comprised entirely of the music of Russell Hartenberger.  The first half of the concert consisted of a NEXUS favorite, “The Invisible Proverb” (recorded By NEXUS on their “Drumtalker” CD) and the first of two world premieres, “Moondog Suite,”  which was followed after the intermission by the premiere of “Persian Songs.”  All three of these works, but especially the “Persian Songs,” featured the inspired singing of Sepideh Raissadat.  Garry Kvistad’s June 17 blog posting (“Different Beat”) provides a great summary of the concert.

The aspect of the two premieres that was especially gratifying to me was that they ventured into unfamiliar musical territories, untouched anywhere else as far as I’m aware by the percussion ensemble paradigm – yet another example in a 43-year-long history of NEXUS finding aesthetic value in music that’s outside of the current norms and thereby expanding  musical boundaries in the percussion genre. For me personally, the concert was also an exploration into a relatively new percussion instrument, the cajon (“box’ in Spanish).  Both of the premiere works had movements that included solo and ensemble parts for cajon, and I had never performed publicly on the instrument prior to the concert.  Coincidentally, I had only recently purchased a cajon, and the Kitchener concert provided the first opportunity for me to put the instrument to work, curiously without having any sort of formal study (as has been the case with almost every other percussion instrument I’ve ever played). 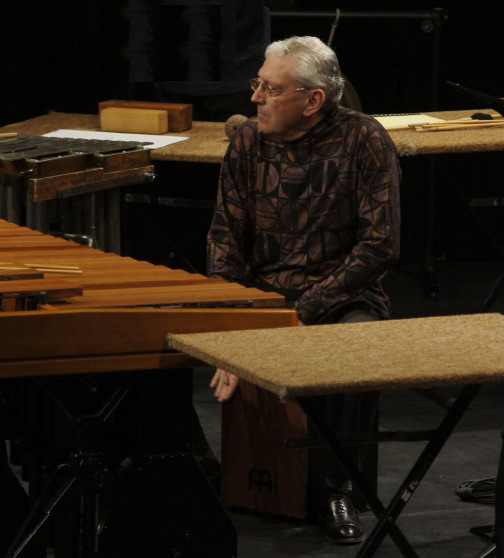 My only previous exposure to the cajon was in listening to a fantastic live performance by my friend, Evaristo Aguilar, at a symposium on improvisation in Tampico, Mexico in 2006, and recently during my December 2013 residency at the Showa Academy in Kawasaki, Japan, where the students prodded me to do “something” along with them on the new set of cajons which the Academy had only recently acquired. During several jam sessions with the Showa students – which they obviously preferred in place of their regular percussion lessons – I found the cajon to be a wonderfully engaging instrument.  With only a couple of basic sounds (though the sound possibilities are certainly much larger) created by the hands directly coming into contact with the instrument (in contrast to the use of sticks and mallets) the shared sense of music making and the lateral (rather than hierarchical) connection with the students was very satisfying.

The directness and simplicity of the cajon has made the instrument popular worldwide, and as with virtually every other percussion instrument, there is an ongoing  tsunami of innovation in the design and manufacture of cajons – with new materials, shapes, sizes, and  sound enhancements (snares, bells, drumheads and more).

There will be future opportunities to hear all three of the pieces from the Kitchener concert.  The programme is scheduled to be repeated at 7:00 PM on October 27, 2014 at the University of Toronto’s Walter Hall.