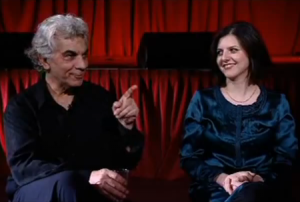 Russell is putting the finishing touches on his suite of arrangements of works by Reza Ghassemi, the award-winning Iranian novelist, musician and composer. Russell’s suite will be premiered by NEXUS at the Open Ears Festival in Kitchener-Waterloo on June 13th.   Ghassemi is adept in classical Iranian music and is a master of the Persian lute called the setar. His work has had a strong influence on young Iranian artists with whom the setar had for some time been falling out of favour, but has now gained great popularity again, a new era in Iranian classical music!   One of those young artists is Sepideh Raissadat, who will be sharing the stage with NEXUS for the premiere of Russell’s “Persian Songs”. Miss Raissadat is featured on Ghassemi’s latest album “14 Cheerful Pieces”, released in 2010 in France. Ghassemi currently lives in France where he continues to teach Iranian music.  I hope you will come and hear this unique concert!