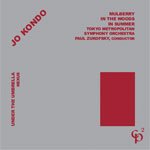 Did you know that Toru Takemitsu commissioned Jo Kondo to write a piece for NEXUS for 25 cowbells? Titled Under the Umbrella, the piece was recorded at John Wyre’s home outside of Norland, Ontario in August 1980. Now the recording has been re-released by CP2 recordings, on an album that also features Jo Kondo’s orchestral works Mulberry, In the Woods, and In Summer performed by the Tokyo Metropolitan Symphony Orchestra under PAUL ZUKOFSKY. You can read an interesting discussion of Jo Kondo’s music here.

Under the Umbrella was recorded on August 18, 1980, in the geodesic dome that John Wyre called home. Each movement was recorded in one take, without edits. The recording was made using one microphone – NEXUS constructed a pentagonal rack, from each section of which hung each player’s five “almglocken”. For the original recording the recording engineer was Tim Clark and the original mastering was done by Robert C. Ludwig.

On the new album, Maestro Zukofsky has provided a liner note for Under the Umbrella. The piece was written in 1976 for 5 percussionists (for the premiere recording Bob Becker, Bill Cahn, Robin Engelman, Russell Hartenberger and John Wyre) playing 25 untuned cowbells or “almglocken” and a gong. The first movement is up-tempo and “thick” says Zukofsky, the second slower emphasizing melodic content. “The third movement has the slowest tempo and the thickest texture, with much interplay between strongly accented punctuations, and the use of “rolling” to produce sustained sounds”. The fourth movement has the fastest tempo and “a thin texture… [that] once again emphasizes the melodic content”. Zukofsky comments, “As the shortest movement, and coming as it does after the long, slow, and demanding third movement, this segment affords a final release to a composition about which Morton Feldman said “I think [it] is going to be another kind of classic as the years go by.”

The three orchestral works on the album are edited versions (also including some rehearsal takes) of the “Jo Kondo Composer’s Portrait Concert” of October 7, 2004, held in Suntory Hall, Tokyo, Japan. Mulberry was written in 1998, and is dedicated to the memory of Toru Takemitsu. In Summer was written in 2004, under commission from the Suntory Music Foundation, and was premiered at that October 2004 Suntory Hall concert.

The recording was remixed and re-mastered by Paul Zinman at Soundbyte Productions, Inc., NYC. The recording engineer was Yukio Kojima. Paul Zukofsky made the edit choices and supervised the pre and post production. The original LP was number CP2 #11, the new release is CP2 #123