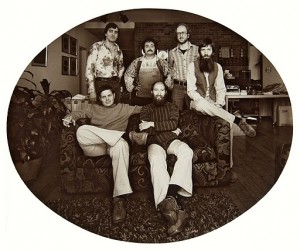 NEXUS is celebrating the beginning of its 40th season on Saturday, May 22nd when the group turns 39! Having ushered in their anniversary season with a sold-out concert introducing their new commission from Steve Reich, NEXUS is looking forward to appearances in Toronto, Minnesota, Japan, Europe, New York State, Texas, Virginia and points west. It’s going to be a wonderful performance season. At left is a vintage shot of the original NEXUS members in 1976 when the group was only 6 years old, including John Wyre, Michael Craden, and Robin Engelman. Garry Kvistad joined NEXUS in recent years. The photo was taken by Arnold Matthews at the Nimbus 9 Studios in Toronto. A series of Direct-To-Disk albums were released as special limited edition recordings under the Umbrella label and Arnold was the photographer for almost all of them. This photograph is on the cover of the “Nexus Ragtime Concert” album.  Front row: Robin Engleman and Bob Becker. Back row: Bill Cahn, Michael Craden, Russell Hartenburger and John Wyre. Arnold says, “We were sort of Nexus groupies and went to many rehearsals and concerts…an interesting group with many interests. Robin Engelman came and worked in my darkroom with me, creating colour prints from colour slides on several occasions.”

Below is the inside of the Ragtime album jacket. Arnold took the photos during the actual recording session using a very quiet Leica rangefinder camera. Of course, today, his digital cameras make no sound at all!.

The Ragtime recording available on our website here is a re-release of the original Direct-To-Disc recording of 1976. It is made from the high-technology tape master produced at the same time as the performance was recorded directly onto a master laquer. (It was released from the tape because the original Direct-To-Disc metal is no longer available). A live performance in every exciting meaning of the word, NEXUS performed each side of the entire original album completely as they would play in a live concert, with the performance continuing uninterrupted as the master laquer was cut – an enormous challenge! No editing, no fixing, no changing of the performance!