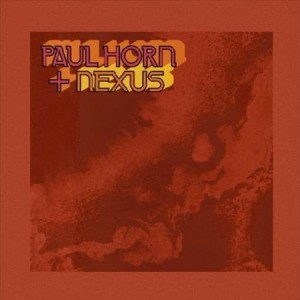 “Paul Horn + NEXUS” is an album that has been long out of print. It was originally released in 1975 (one of NEXUS’ earliest recordings) on Epic (KE33561).  Through inspired improvisations, NEXUS with Paul Horn on flutes and alto sax  created an emotionally potent and stylistically diverse album merging rhythms and cultural influences from South America, Africa, India, Tibet and the U.S.A. The NEXUS personnel at the time were  John Wyre, Russell Hartenberger, Bob Becker, Bill Cahn, Michael Craden, and Robin Engelman. You can still find a few copies of the original vinyl online and you can see images from the original cover by clicking here.
The Dusty Groove website describes the album, calling NEXUS a “funky fusion group” that “clearly comes out of the Brazilian tradition”!!  Here is Dusty Groove’s description of the album:

“Some of the best Paul Horn recordings of the 70s, ­ tracks that were recorded amidst the Brazilian fusion explosion of the 70s, and which really push Horn’s sound to the limit! The album features work that Horn cut with the funky fusion group NEXUS, ­ very electrified tracks driven on by some heavy percussion work that clearly comes out of the Brazilian tradition spread to the US by Airto –  ­ jazzy, frenetic, and with a good mix of electric and organic elements! Titles include Somba, Crystals, Friendship, Nexus, Mbira, Capetown, and African Funeral Song.”

So…how can you hear it? You can listen to portions of the tracks at CD Universe by clicking “Altitude of the Sun”, still available. (Details can be found by clicking here). It is a re-release of two Paul Horn discs, one of which is most of the material from “Paul Horn + NEXUS”, plus a recording Paul Horn made in 1976 with Egberto Gismonti originally titled “Altura do Sol”. (“Altitude of the Sun” was issued by Black Sun Records, now owned and operated by Celestial Harmonies based in Tucson, Arizona).  Not only that, but Wounded Bird Records reissued the complete “Paul Horn + NEXUS” on CD in April 2010. The Amazon.ca reviewer Alpha-Beta in Victoria, British Columbia gives it a five star review:

“Wonderful album – finally re-issued!!! Five stars for a great album and five stars for Wounded Bird Records for re-issuing this. All the tracks here are wonderful collaborations between percussion group NEXUS and Paul Horn. Paul Horn’s flute and saxophone playing on this recording is at times fast and jazzy, and at other times reflective and meditative. NEXUS add many percussive colours ranging from tabla drums to marimba. Always tasteful – yet masterful. A real gem if you like percussion and/or ‘world music’. The flavors here move from Indian to African to Jazz and back . . . African Funeral Song is very moving and tracks like Eastern Star and Dharma really catch fire. “