By the year 1930, the medium of silent movies encountered a rapid decline in popularity due to the advent of “talking” pictures with sound tracks.  The Eastman Theatre attendance was so seriously affected that the orchestra could no longer be supported.  Again, George Eastman assumed a leadership role in restructuring the orchestra to make it solvent.  A new organization called the Rochester Civic Music Association was formed, and it consisted of nearly 10,000 members in the Rochester community, who purchased low-priced annual memberships to support the orchestra.

The old Eastman Theatre Orchestra was reduced to 50 full-time players, and it was given a new name – the Rochester Civic Orchestra.  Perhaps the most significant feature of the Civic Orchestra was that it was created primarily for educational purposes.  It was intended to perform weekly concerts in the Rochester high schools which would also be broadcast by radio to all of the other Rochester public and parochial schools where students would listen on their radio sets in classrooms.  George Eastman even provided radios to each of the city schools.

In addition, the new Civic Orchestra presented a series of Sunday pops concerts as well as a series of Wednesday night concerts which were broadcast all over the United States over the NBC “blue” radio network.  The Philharmonic concert series continued uninterrupted through the restructuring, and for those programs the Civic Orchestra was augmented with part-time musicians to enable it to perform the classical repertoire.

Eugene Goossens continued as the Philharmonic’s Music Director, and Guy Fraser Harrison became the conductor of the Civic Orchestra with Paul White as Assistant Conductor. 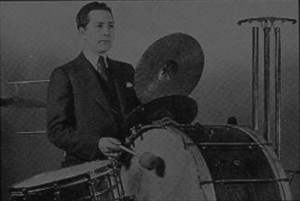 Stanley Street at the Gran Cassa

The Civic Orchestra continued to use the same percussion instruments used by the old Eastman Theatre Orchestra, and these included some of the best instruments available at the time such as K. Zildjian “Constantinople” (pre-WWI) cymbals and K. Zildjian “Istanbul” (post-WWI) cymbals, two Leedy xylophones made from the dense heartwood of very old rosewood trees, a set of Deagan “Parsifal” bells with resonators, a set of Leedy 2” tubular chimes, a Leedy 15”x8” snare drum, and a Leedy 36” bass drum.  All of these instruments remained in use through the 1990s.

Eugene Goossens departed Rochester in 1931 to go to the Cincinnati Symphony and for the next four seasons Fritz Reiner and Sir Hamilton Harty became the principal guest conductors until Jose Iturbi, an internationally-known concert pianist with great flair, was appointed as the Philharmonic’s Music Director in 1936.

In 1932 the percussion section of the Civic and Philharmonic orchestras was reorganized and William Street became the timpanist, with Stanley Street as principal percussionist and George Waterhouse as section percussionist.

The Sunday evening Civic Orchestra pops concerts continued to provide opportunities for William and Stanley Street to perform as soloists with the orchestra.  The Civic Music News magazine for March 25, 1935 carried the following feature:

“William and Stanley Street will be featured soloists at the Civic Orchestra concert Sunday evening, March 31.  They will play xylophone-and-marimba arrangements of a Prelude by Saint-Saens and a Caprice by Breuer.  The orchestra will be under the direction of Guy Fraser Harrison. 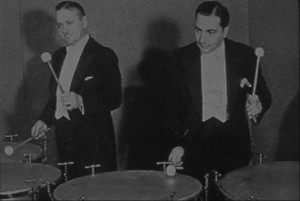 In previous appearances with the Civic Orchestra, the Street brothers have scored great success.  Both are masters of their instruments and their appearance with the orchestra this year is an event that has been looked forward to by a great many music lovers.  A large crowd is expected to greet        them Sunday evening.”

Perhaps the biggest Civic Orchestra percussion highlight of the 1930s was the orchestra’s premier performance of “The Worried Drummer(s)” by Schreiner in 1936.  Here again is a quotation from the Rochester Civic Music News:

“William and Stanley Street did such good work and aroused so much merriment with Schreiner’s ‘Worried Drummers’ some weeks ago, that they will play the number again at the concert to be given in the Eastman Theatre Sunday evening, April 5, by the Civic Orchestra.

It is seldom that an orchestral public clamors for the repetition of a piece.  The unusual has happened in the case of the ‘Worried Drummers,’ however, and the Street Brothers will do the encore.

The composition calls into play all the varied instruments of the percussion section, and demands exceedingly fast and accurate work on the part of both men.  Correctly rendered – as the Street Brothers are certain to render it – it is one of the most novel and amusing of all orchestral works. . . . Due to the wide comment raised by the first rendition of “The Worried Drummers” some weeks ago, a crowd of more than usual proportions is expected for this concert.”

Of course, in addition to the Sunday concerts and the high school concerts of the Civic Orchestra, the Rochester Philharmonic under Jose Iturbi continued to perform the great classical and contemporary masterpieces in the classical subscription series concerts, and many of those concerts were also broadcast throughout the United States over the NBC radio network.  The augmented percussion section of the Philharmonic in the 1930s included the names of a number of Eastman School percussion students including Richard Coddington, Ray Hasenauer, Oliver Zinsmeister, Hugh Robertson, and Frederick Fennell.

In 1939 the Rochester Philharmonic Orchestra entered into a recording agreement with RCA-Victor under which a number of 78-RPM electric-process records were issued featuring Jose Iturbi conducting and performing on piano.  There was also a series of very successful recordings for RCA-Victor conducted by Howard Hanson and featuring music by American composers.

Perhaps the most unusual percussion event in the decade of the 1940s was the appearance of the internationally-acclaimed Japanese xylophone virtuoso, Yoichi Hiraoka, with the Civic Orchestra on March 30, 1941.  According to the Civic Music News:

“This gifted young musician has been ranked as the most able virtuoso extant on his chosen instrument . . . . It is not only his actual playing that wins his audiences.  His footwork and exuberant gesturing aid in the impression he creates.  As he pores over the xylophone in soft passages, he jounces and bounces back of it, dashing off dancy rhythms, his face lighting up in wide smiles at intervals while he waits for entrance cues.

His discriminating musicianship enables him to play such works as Handel’s “Sarabande,” excerpts from the Bach Flute Sonata No. 1, the Haydn Minuet in D, the Beethoven “Kreuzer” Sonata or Mozart’s “Eine Kleine Nachtmusik.”

In 1944 the Philharmonic’s Music Director, Jose Iturbi, moved on to Hollywood to pursue a career in the movies and for a few seasons the orchestra worked with temporary conductors such as Sir Thomas Beecham (1944-45) and Leonard Bernstein (1945-47).  The list of guest conductors also included Fritz Reiner, Igor Stravinsky, Dmitri Mitropolous, Eric Leinsdorf, and Andre Kostelanetz.  Guy Fraser Harrison and Paul White continued to conduct the Civic Orchestra, which regularly featured the ever-popular Street Brothers as soloists.

In 1947 Eric Leinsdorf was appointed as the Philharmonic’s forth Permanent Music Director.  Through the 1940s the Philharmonic’s percussion section – in addition to the Street Brothers, who were the only full-time members of the Civic and Philharmonic Orchestras – included Daniel Hinger, Robert Swan, Alan Abel, and Harvey Biskin, all of whom were students of William Street at the Eastman School.

The decade of the 1950s began with the departure of Guy Fraser Harrison from the Civic Orchestra.  Paul White took on the duties of conducting the Sunday pops concerts and the high school concerts.  Dr. Howard Hanson conducted the Civic Orchestra in the Eastman concerto concerts which featured the outstanding graduating performers from the Eastman School of Music.

One of the notable percussion events of the 1950s was the appearance of the Gordon Peters Marimba Ensemble (later called the Marimba Masters) with the Civic Orchestra on February 19, 1955.  The ensemble consisted of five marimbists – all students of William Street – and a string bass.  The program included the “Dance of the Comedians” by Smetana and “Malaguena” by Lecuona.  The Marimba Masters appeared again with the Civic Orchestra in March, 1958.

1956 brought with it the most significant change to affect the orchestra’s percussion section to that date.  At the end of the 1955-56 season it was announced that Eric Leinsdorf would be leaving Rochester.  William Street decided to retire at the same time, after 34 years of performances with the orchestra (he continued to teach at the Eastman School until 1967).  Hugh Robertson was appointed as timpanist of the Civic and Philharmonic orchestras, while Stanley Street stayed on as Principal Percussionist. 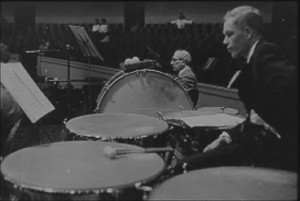 Stanley Street was featured as xylophone soloist with Civic Orchestra on April 20, 1957 playing the “Gypsy Love Song and Czardas” from “The Fortune Teller” by Victor Herbert.  Also in 1957, Frederick Fennell returned to conduct a pops concert with the orchestra in which the percussion section (William and Stanley Street and Gordon Peters) was given solo billing in several selections of Leroy Anderson favorites.

Among the guest conductors of the Philharmonic series from the time of Leinsdorf’s departure to the end of the decade were Andre Kostelanetz, Howard Hanson, Jose Iturbi, Victor Alessandro, Thomas Shippers, Pierre Monteux, Georg Solti, Jean Martinon, Alfred Wallenstein, and Leopold Stokowski.  In 1959 Theodore Bloomfield was appointed as the Philharmonic’s Music Director. 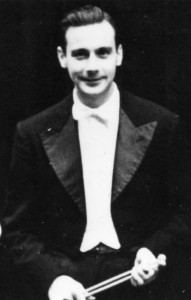 Throughout the decade of the 1950s, perhaps the thing that brought the greatest national recognition to the Rochester Philharmonic Orchestra (under the name, Eastman-Rochester Orchestra) was the series of LP recordings of American music on the Mercury label, conducted by Dr. Howard Hanson.  Many of these recordings featured large percussion sections.

In addition to the Street brothers, the Philharmonic’s percussion section in the 1950’s included a number of the finest Eastman School students performing with the orchestra on a per-concert basis – among them, Ted Frazeur, Stanley Leonard, John H. Beck, Gordon Peters, Peter Tanner, Mitchell Peters, and Ron Barnett.