By the year 1980, the Rochester Philharmonic orchestra was presenting the following programs: a classical subscription series (broadcast regularly on local radio and occasionally on local television), a pops concert series, an elementary educational concert series , a series of youth concerts in local high schools, a combined concert with the RPO Youth Orchestra, a series of Tiny Tots concerts, and a series of Family Concerts.

In addition to Music Director David Zinman and Associate Conductor Isaiah Jackson, it was announced in 1983 that Erich Kunzel – who had appeared regularly with the orchestra since 1975 – would become the first to hold the position of Principal Pops Conductor. In 1985 David Zinman departed from Rochester to take on a new post with the Baltimore Symphony, and Jerzy Semkow was appointed as Principal Conductor through the 1988-89 season.

In 1986 Isaiah Jackson left the RPO to conduct in England. The orchestra’s Exxon/Affiliated Artists Conductor, Enrique Arturo Diemecke, served as acting conductor of the core orchestra until the appointment of Peter Bay as Associate Conductor in 1987.

Perhaps the most significant event of the 1980s for the orchestra was the opening of the Finger Lakes Performing Arts Center in Canandaigua, New York on July 16, 1983. This facility would serve as the orchestra’s summer home.

Percussion highlights of the 1980s included these performances:

One of the biggest changes to occur in the percussion section in the 1980s was the introduction of digital sampling technology to augment the section’s sound resources in order to meet the orchestra’s ever-changing musical requirements. The use of digital samplers, sometimes combined with MIDI drum-triggers to form a complete electronic system, increased dramatically. It should be noted, however, that an ethical policy has been followed in which the new digital instruments were never used to replace performers in the percussion section; rather, they were only used only as sound sources to replace other instruments such as tubular chimes or tape recorders.

Original samples (digital recordings able to be performed on command) were created and used in performances of the following compositions:

Student percussionists who performed in the RPO percussion section in the 1980s included Christopher Lamb, Patricia Dash, and John R. Beck, among many others.

Percussion continued to play a prominent role in the orchestra’s 1990-91 season as the group NEXUS again appeared on the classical subscription series to perform a new work by Toru Takemitsu, “From me flows what you call Time”, conducted by David Effron on February 7 and 9, 1991.

As the Rochester Philharmonic Orchestra approached its 70th anniversary season, the percussion section – John H. Beck, William Cahn , Ruth Cahn, and John McNeill – began its 20th year of performances together with Brian Stotz also in his 15th year in the section. 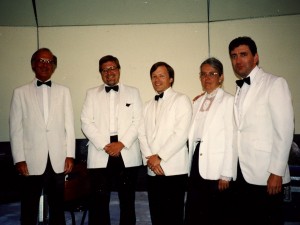 For much of the orchestra’s history the percussion section has been something of a family affair, beginning with the Waterhouse cousins and the Street brothers and continuing with the Becks and the Cahns, but the full impact of the orchestra’s influence on percussion in America (not to mention, of course, the immense influence of William G. Street and John H. Beck as percussion teachers at the Eastman School of Music) can be most clearly seen in the long list of names of percussionists who have performed in the Rochester Philharmonic Orchestra, and who have gone on to fill leading positions in many other symphony orchestras in America and around the world.

As of this writing (June 2012) the percussionists of the Rochester Philharmonic Orchestra are: