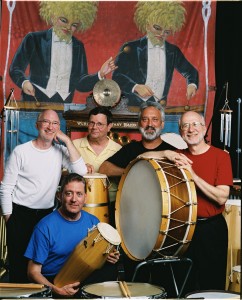 After hearing NEXUS perform at Percussion Rochester, Tim Wagner wrote to us with an interesting question. Tim is a film technician from the George Eastman House museum and archive in Rochester, NY and also a charter member of the Carousel Organ Association of America, a group dedicated to the preservation and enjoyment of these outdoor mechanical organs. He writes he was “amazed and delighted” to see a brass trumpet band organ in a NEXUS photo, and wanted to know more. You can see the organ’s trumpets peeking out between Robin and Garry in the photograph, left. NEXUS member Garry Kvistad is the owner of the organ and he told Tim all about it:

“The instrument you are asking about is from my collection.I am a member of NEXUS which is based in Toronto but I live near Woodstock, NY in the Catskills.In 1994, I bought a number of items from the Smith Collection at a Sotheby’s auction.Included were ten turn-of-the-20th-century Circus Banners, 2 Mutoscopes and the 1926 Wurlitzer Band Organ Model 125 that you saw in the NEXUS photo. It was in excellent shape and I mostly had to tune the pipes and fix the trumpets to make it sound good. With the Band Organ were many rolls, one of which contained a tune by George Hamilton Green called Fluffy Ruffles. You may be aware that NEXUS is responsible for the rebirth, so to speak, of novelty ragtime music from the 1910s – 1930s, most notably the music of the late great xylophonist/composer George Hamilton Green.Ironically, Green spent the last years of his life as a graphic artist here in Woodstock. So, when NEXUS did a concert in Woodstock in 2004, we played Fluffy Ruffles with the band organ accompaniment.It was fabulous, as you might imagine. It’s nice to know someone noticed that in our PR photo.”

You can hear the recording of that performance by clicking here.

It was recorded by George Rockman of Studio at Far Away, LTD, at the Byrdcliffe Theater in Woodstock. Robin Engelman performed with Garry, Bill Cahn, Russell Hartenberger and Bob Becker. Garry explains that “Fluffy Ruffles was performed in the middle of an improvisation, hence the xylo intro and abrupt ending since we keep going directly after Fluffy.” As mentioned, George Hamilton Green lived in Woodstock NY inr the last part of his life and is buried in the Woodstock Artist’s Cemetery. You can see a photo of Green’s grave stone, here.

There is a 1986 recording of NEXUS playing the music of George Hamilton Green: click here

And you can read more about Woodstock’s many percussion connections, here.