This blog posting starts in the 20th century – 1959 to be exact.  That was the year I entered the 8th grade and had my first drum lesson with a real drum teacher.  His name was Joseph Huttlin, and he came from a family lineage of rudimental drummers.  He visited  my school for one afternoon every week, and after expanding my vocabulary of rudiments he assigned my first snare drum piece – “Three Camps” as found in “The Moeller Book,”  which  in 1959 was priced at $1.00.  I thought “Three Camps” was as cool as it gets, and in all of the years that followed that thought would only be reinforced.

Fast forward to 1963 . . . my senior year in high school.  For my history class semester report, I decided to give a music presentation – a performance of the “Camp Duty of the Army.”  The point of the presentation was to demonstrate how important the drums were to the British and Continental Armies in the 18th Century.  I was joined by a good friend (Dimitri) who was a flutist in the high school band, and of course, the presentation began with the 18th Century morning wake-up call, the “Reveille,” traditionally called, “Three Camps, or Points of War.”  My history teacher was ecstatic at this visceral connection with the subject matter, and I received an unqualified “A+” for the presentation.  For the rest of the semester, every time I saw him, either in class or just passing in the hall, I was greeted with a very appreciative smile.

Fast forward to March 21, 1975 . . . at York University.  NEXUS performed a program organized by Robin Engelman of fife and drum music.  Robin had been researching 18th Century fife tunes and drum beatings and this NEXUS concert brought Robin’s work to the forefront, and at the same time it reawakened in me an enthusiasm to revisit the “ancient” style of rudimental drumming that I had set aside after high school. From 1975 until now NEXUS has regularly programmed “Ancient Military Aires” – a medley of traditional drum beatings that includes “Three Camps.”

Fast forward to 1976 . . . the American Bicentennial year.  It was my 8th season in the Rochester Philharmonic Orchestra and there were premieres of new American works on every one of the Philharmonic Subscription Series concerts.  In addition, every concert would begin with a short medley of fife and drum music played by John Beck, Ruth Cahn, and me to the accompaniment of two of the orchestra’s flutists playing on fifes.  We named ourselves the “Rochester Fifes and Drums”  and the very first music to be played was “Three Camps.”

In the same year, our orchestra fife and drum group began to present programs in schools in the Rochester area.  In our first school program, we were joined by Robin Engelman, who drove down from Toronto especially to participate in the inaugural concert.  The program consisted entirely of 18th Century British and Continental military music that was meant to represent the “Camp Duty” for one day in the lives of soldiers during the American Revolution.  It was simply an expansion of my high school history program, and it generated such interest, that for decades to follow we would present it in virtually every grade school in the Rochester region.  In addition, the program which was titled, “A Day in George Washington’s Camp,”  would be performed for local historical societies and community service organizations and even for local legislative sessions. 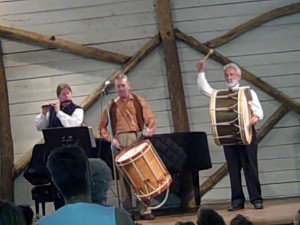 Fast forward to 2005 . . . in the 21st Century.  This was a year in which I was asked to give presentations to several local historical societies.  I decided to simply write down the fife and drum school program that I had presented many, many times over several decades, and to assemble the program, along with some background information, into a book titled, “Music for A Revolution.”  The book would enable professional performers to present (and classroom teachers to discuss) the hour-long program in a way that is intended to be fun, informative and entertaining.

Fast Forward (for the last time) to November 4, 2010.  As part of my duties at the Eastman School of Music I presented “A Day in George Washington’s Camp” for the entire percussion studio.  The object of the session was to demonstrate how the students could generate income for the rest of their performing careers by using the basic snare drum skills that they had already acquired and then making them relevant to the needs and interests of schools and organizations in their communities.  I simply presented the program just as I would have done for a grade school assembly, and the Eastman percussionists seemed to have a good deal of fun embracing the role of grade schoolers. 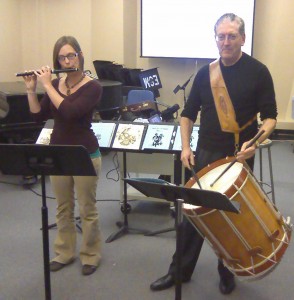 I had been surprised at the beginning of the semester in August 2010 when the students had voted to have the fife and drum presentation instead of other topics that had been proposed.  As it turned out, when I polled the Eastman percussionists again in the November 4 session I learned that most of them had little or no background in fife and drum music.  Furthermore they all seemed to be genuinely interested in the subject matter – the history as well as the music itself.  Luckily, one of the new doctoral candidates, Megan Arns, had experiences in a fife and drum corps in Missouri, and she graciously offered to play the fife parts for the studio class.  Once again I had the satisfaction of presenting “Three Camps” – the very same drum music I first learned in 8th grade, and which I have been playing ever since – to another audience of interested listeners. 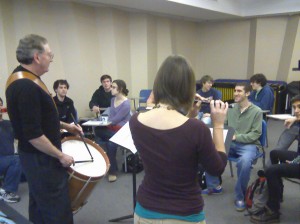 When I saw the name Joe Huttlin,I have been instantly transformed back to being 13 in 1958….I went to Joes house every friday afternoon when he lived across from Germantown Hospital…at times I am sorry I did not make percussion my livelihood…to this day,there has never been a better technician than Joe Huttlin….with a roll that would cut paper….he taught me to read music…in all ways,which when I was older (21) helped me audition for the USArmy band during the Vietnam war and become first chair…I think of him fondly!!!