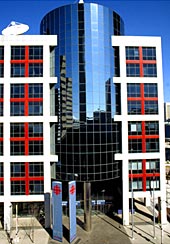 NEXUS is performing on the evenings of Friday April 3rd in Orangeville Ontario (ticket information here) and  Sunday April 5th in downtown Toronto (tickets available here). Choose one, or go to both!  Each venue gives plenty of scope for making a day of it. The attractive town of Orangeville offers a spring drive in the country and, along with its vibrant downtown area and very active arts and music community, also provides an opportunity for ghost sightings! (The Orangeville Concert Association failed to warn NEXUS of this very real possibility!) The Glenn Gould Studio in the CBC Broadcasting Centre is in Toronto’s theatre district with its Sunday matinees and popular attractions like the CN tower and the CBC Museum.

Let me talk about the Glenn Gould area first, then I’ll tell you about Orangeville and its ghosts. The Glenn Gould Studio is located on the main floor of the Canadian Broadcasting Centre at 250 Front St. West across from the Toronto Convention Centre and CN Tower, and very near Roy Thomson Hall and the Princess of Wales and Royal Alexandra Theatres. So if you want to spend a Sunday downtown, you can enjoy a number of things and finish it all up with NEXUS in the evening. You can check out a matinee of The Sound of Music at the Princess of Wales Theatre, or of Dirty Dancing at the Royal Alexandra Theatre. You can catch a late afternoon concert at Roy Thomson Hall of school bands, orchestras and choirs. You can ascend the CN Tower for a spectacular view or a meal in the revolving restaurant. You can explore the CBC Museum right next door to the Glenn Gould and check out historic broadcasting equipment (we’ve come a long way, baby!), an exhibit on radio sound effects, or saunter down Memory Lane with The Friendly Giant and Mr. DressUp. Come back to the present with NEXUS performing brand new works and arrangements. 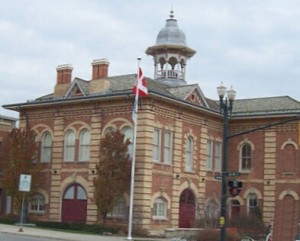 If the urban delights of the city on a Sunday are not your cup of tea, then head northwest to Orangeville.  The town is located in the recent NEXUS blog posts about Carnegie Hall in New York). Orangeville’s Town Hall Opera House on Broadway is where NEXUS will perform. It was constructed in 1875 and after a terrific restoration is now home to the Orangeville Concert Association, Theatre Orangeville, Orangeville Music Theatre, and the beautiful Raynes Crystal Collection. By the end of the 19th century, 40 of the early buildings on Broadway that are still in use today had been built. So, with a main street that boasts 130 year old buildings, ghosts are a given.

NEXUS beware! Granny (Maryann) Newton is one of the oldest ghosts in Orangeville, and her home was on the original site of the Orangeville Opera House, so that is where she tends to hang out. Theatre Orangeville’s technical team has had many ghostly encounters in the House, most recently a few weeks ago when mysterious footsteps were heard climbing a ladder in the Opera House, and a female ghost was actually seen walking through the wall on the staircase leading up to the Opera House. So Theatre O offered four free tickets to their show last month to anyone who spotted Granny’s ghost! Wayne Townsend’s book Orangeville tells us about the Springbrook ghost who in 1895 filled the newspapers with his exploits, and the seances that were held in – yes! – the Opera House to try to slow him down. And just this week, the Meadowvale Spookies Paranormal Research Team investigated the Opera House. They had permission to do both photography and video in the dark hours, but the results of their investigation are not yet known.

It was a good choice to do their investigation before NEXUS got there. Surely the vitality of a NEXUS performance will drive any self-respecting spectres out of the building! Or perhaps — set them dancing!

To read more about the ghosts of Orangeville check out this write-up about the Greystones Inn (a short block from the Opera House), and Sandra Traversy’s piece about several Hauntings in the Hills at the Hills of Headwaters site.  See you at the concerts!