THE ABILITY TO BREATHE TOGETHER   We were honoured to have our Drumtalker album nominated for a Juno, the Canadian equivalent of the Brit Awards of Great Britain or the Grammy Awards in the USA. The reviews were in:   Payton MacDonald (American Record Guide) said,  “Nexus remains one of the great percussion groups in the world…. Read more » 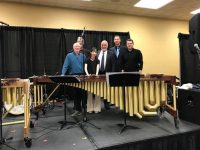 It was quite a week in Indianapolis. NEXUS record producer Ray Dillard gave a clinic on “Tips and Techniques for Recording Percussion in the  Modern Era” with the help of Escape X. Ray has done a few of these clinics now, and tries to make each one different – including different jokes, folks! This one… Read more »

The Blackearth Percussion Group was conceived in 1971, formed in 1972 and disbanded in 1979. It was inspired in part by Jan Williams’ New Percussion Quartet of Buffalo and named after a small farm town in central Wisconsin. I was one of the original group members at age 22, along with my brother Rick Kvistad… Read more »

Welcome to the NEXUS site and my blog. All five Nexonians were in Toronto this week preparing the new piece by Eric Ewazen to be premiered in Dallas and Austin next week at PASIC.  The 4-movement work is scored for five percussionists and wind ensemble.  The final version of the solo parts arrived only a… Read more »