I really want to thank you for doing this with me. As you will see from my questioning I tried to take a perspective of the “Bob the Performer” and “Bob the Composer” and combine the two. If you find that you answer one question in a previous answer and want to omit a question… Read more »

The following interview was conducted at the request of the Percussive Arts Society, and appeared in the August, 1996 issue of Percussive Notes. LHS: Let’s get this important question out of the way in the very beginning. Everybody who knows anything about xylophone knows you are not only the greatest living xylophonist, but also the… Read more »

Madness, beauty and the big bang: A look at the 2007 Ojai Music Festival, By Kit Stolz (Ventura County Reporter Online) The Ojai Music Festival, now in its 61st year, has long been known as one of the finest classical music festivals in Southern California and the nation. The performances at Libbey Bowl cost a… Read more »

Ventura County Star, California By Charles Levin Thursday, June 7, 2007 Ojai Music Festival When: June 7-10 When the ensemble NEXUS formed in 1971, a stage filled with nothing but drums, xylophones and more exotic percussion fare was an anomaly, sometimes regarded as a novelty and often confined to music conservatories. That reality has changed…. Read more »

(Are the overtones tuned differently in various ranges of its keyboard?) The term ‘xylorimba’ clearly refers to some kind of hybrid instrument, but it depends on who is using the term, and when. Even the word itself is a composite: xylo is the common Greek root meaning ‘wood’; and rimba is an arbitrary clipping of… Read more » 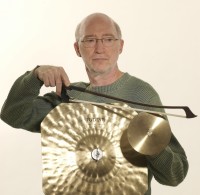 Percussionists who perform in symphony orchestras form a relationship with their instruments that is esoteric, often arcane, and little understood by other musicians and the general public. Although most people have seen and heard cymbals, gongs and bells, for example, very few have had the experience of listening to one of them intimately and intently… Read more »

The following short article was written in response to a request from the Sabian cymbal company. The questions were: “How do you deliver a peak performance? How do you prepare for a concert?” An edited version of the article, along with answers to the same questions by Vic Firth, Evelyn Glennie, Ney Rosauro, John Wooton… Read more »

Click here for a story by Lauren Vogel Weiss.

I have to say, it’s becoming more and more difficult for me to think of things to say about playing the xylophone these days. Even though it’s an instrument that I still play fairly regularly on NEXUS concerts, it’s not something that I spend much time with outside of that context. It’s interesting to me… Read more »