Here in Canada, we celebrate Thanksgiving on Monday, October 8. What more fitting time to give a BIG THANK YOU to all of you who contributed to our Kickstarter Campaign for Drumming At 50.  September was definitely exciting – if a bit nerve-wracking! We were fund-raising for our Video Recording with Sō Percussion and friends of Steve Reich’s DRUMMING. Thanks to your help, we can now complete this historical videography featuring the two ensembles along with Yumi Tamashiro, Daisy Press, Beth Meyers, and Alex Sopp. The funds we raised are covering the cost of making the video recording (video, audio, and record label production).

As far as we know, no professional filming has ever been done of Steve Reich’s DRUMMING – rather remarkable considering the piece is about to celebrate its 50th Anniversary! Russell’s idea was to document the way it was performed by the original Steve Reich and Musicians ensemble (Russell, Bob and Garry are all Steve Reich And Musicians members) with the input of second and third generations of percussionists. It has been an epic undertaking, and you’re going to love what filmmaker Even Chapman of Four/Ten Media has done with it. As well, it has been an honour to have the complete support of Steve Reich himself on this project. To quote the Kickstarter campaign description, “Russell and Bob learned Drumming directly from Reich and for us who have heard them in concerts, we can attest to that fact that they have perfected the art of phasing! The earlier renditions of Drumming were mostly taught by rote; Russell and Bob were among the most important figures for establishing the piece as a part of the percussion repertoire and have carried the torch of imparting wisdom on this work in the past five decades.”

Cantaloupe Records is on board for putting this project into your hands, and we will keep you posted as production proceeds. Again, thank you so much. This project is dear to all of us, so much so that the artists have all donated their time to it. Your donations are going into the actual cost of production.

Happy Thanksgiving from all of us here at NEXUS! 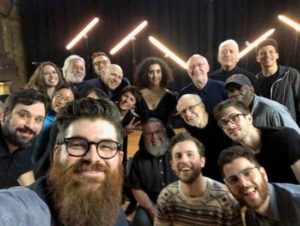