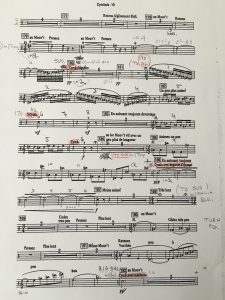 In response to my recent posts about the cymbal parts for La Mer and Daphnis and Chloé I received some comments and questions regarding the mallets I use on suspended cymbals. As I pointed out in my blogs, early 20th century composers often employed specific terminology regarding striking implements in their cymbal parts – for example: avec la mailloche, baguette d’éponge, baguette du bois, baguette de timbales, etc.  And these are only some of the terms used by Debussy and Ravel. German, Russian and Italian composers equally used a great variety of indications for sticks and mallets to be used with cymbals. In their time and place these terms may have been quite specific and clear, but to contemporary percussionists in North America they are ambiguous at best. In addition, the kinds of cymbals that were in general use in Europe during the early 1900s were vastly different in size, weight and character compared to the mind-boggling variety of cymbal models available today.

During the 1960s and 1970s, when I was a student at the Eastman School of Music, most professional orchestra players used cymbals made by either the A. Zildjian company in the USA, or by the K. Zildjian company in Istanbul, Turkey. Lucky percussionists owned, or had access to, some of the amazing cymbals produced by the K. Zildjian company prior to 1930, when Istanbul was still officially named Constantinople. In general, cymbals used for suspended parts were from 16 to 20 inches in diameter, and medium light to heavy weight. Very thin cymbals, for the most part, were available only in small sizes from around 10 to 14 inches. For orchestra playing we were taught to suspend a cymbal using a leather strap and hanging it on a gooseneck stand (or holding it by one hand), although by then it was becoming common to place a suspended cymbal on a drumset-type floor stand, especially when used as part of a multiple-instrument setup.

For striking suspended cymbals, students and professionals alike tended to use soft yarn marimba mallets with rattan handles, of the style made at the time by the major instrument manufacturers Leedy, Deagan and Musser. 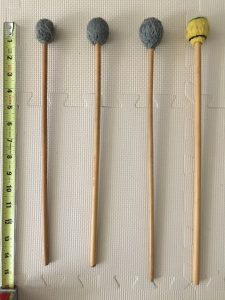 Although no early 20th century composer wrote the indication “with yarn marimba mallet” in a cymbal part, these mallets in fact produce an excellent sound with good articulation and projection when used on cymbals that are typical of the time. The indications in parts that call for “timpani sticks” or “sponge sticks” are not only ambiguous, but problematic given the style of timpani mallets that are currently used for orchestral playing. These mallets – generally with soft felt stitched around hard cores of wood or cork, and with bamboo or wood handles – usually don’t generate the full sound expected from a modern suspended cymbal.

During the 1980s, Ron Snider of the Dallas Symphony Orchestra began marketing his line of RAM suspended cymbal mallets, which I adopted as soon as I found them. 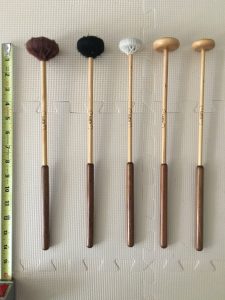 Ron’s mallets have yarn-wrapped wooden cores, with two-step wooden handles. There are three weight/sizes of yarn mallets, and two sizes of unwrapped wooden-headed mallets. They offer far more control and nuance than marimba mallets, while producing a great cymbal sound. More recently, manufacturers such as Malletech, Sabian, and Zildjian have developed their own lines of dedicated suspended cymbal mallets.

In the early 1990s NEXUS was on tour in Europe, and performed with the NDR Philharmonic in Hannover, Germany. The timpanist of the orchestra was an expert mallet maker, and he generously offered each of us a complimentary choice from his extensive line of hand-made sticks. I picked out two pairs (small and large) with solid felt disc-shaped heads, since I had no mallets of this kind in my own collection. 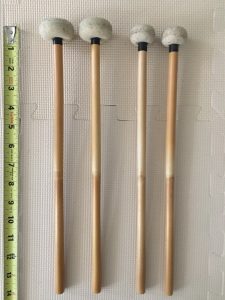 When I eventually tried them out on real timpani I was disappointed – they made a sound I knew I would never want to use in performance. Around a year later, while experimenting with these mallets on concert tom toms, I happened to hit a large, thin suspended cymbal that was hanging from a gooseneck in my studio. I was amazed by the sound they produced, which was beautiful with almost no audible attack. I began using the solid felt mallets extensively on cymbals, both for rolls and single strokes, and in chamber and orchestra applications.

As I continued working with these mallets, I began to desire more options for weight and length, and I also hoped to get additional copies of the originals. The next time I was in Europe, I took the mallets with me and showed them to a few percussionists. They recognized the type immediately and told me that Kolberg in Germany manufactured many varieties of them. When I contacted Herr Kolberg directly, he told me that his company actually made the felt disc heads used by the timpanist in Hannover, and Kolberg could make exact copies (in fact, better than the originals!) as well as any variations I wanted. So, at considerable expense, I ordered a number of additional pairs with exact specifications for handle length and weight. I sent my originals to Stuttgart while still in Europe, and received them and all of the new “copies” at my hotel before I returned home. 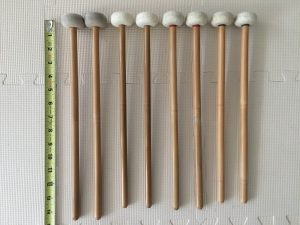 The Kolberg models were indeed beautifully crafted, but the hard felt discs were nothing like the ones on the Hannover mallets, lacking the lovely qualities of tone and attack that I valued so much. I have used the Kolberg mallets only rarely for performance.

Several years ago in Ohio I was performing together with Jeff Luft, a wonderful percussionist and an expert timpani mallet craftsman. His company, Luft Mallets, does superb work. We discussed the Hannover mallets, and Jeff thought he might be able to duplicate them using a synthetic material for the handles. After some R&D work, the result was a mallet very close to my originals from Hannover, only with a material called Innegra used in place of bamboo. 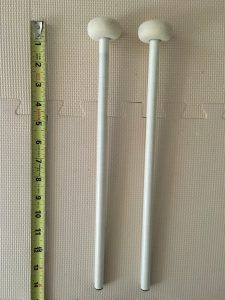 Today, when I play suspended cymbals – whether it’s in the orchestra, or in NEXUS, or in other ensemble situations – I continue to use any and all of the mallets described above. Of course besides “mallets”, I might use many other kinds of sticks and beaters: triangle beaters, knitting needles, chopsticks, snare drum sticks, brushes, rakes…, even things I dream up and make myself – the list is endless. Exploring the sounds of percussion instruments, and the sticks and mallets used to strike them, has been a great adventure throughout my career. Anyone who has read through my articles and interviews knows how much I enjoy having a lot of options for performance. The selections I make, including the mallets I choose to use with a specific instrument, are significant parts of my interpretation and expression of the music. For better or worse, I always aim to create and project a personal sound, rather than a generic or institutional one.