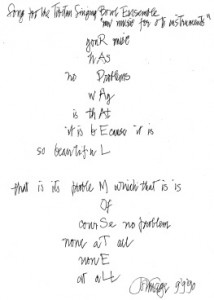 In response to the request on NEXUS’ Facebook, here are a few more John Cage recollections.

In June, 1984 NEXUS embarked on a major European tour lasting over two months. Our first stop on the trip was Amsterdam and the Holland Festival. We played two concerts there, including a monumental all-night improvisation in the Nieuwe Kirke. The festival director had issued a kind of challenge to NEXUS to do this, and of course John Wyre agreed on our behalf without hesitation. We began our first concert a day after arriving in Holland, starting around 10:00PM and continuing without a break until sunrise. Jet lag actually worked in our favor in this case, and most of the die-hard audience stayed for the entire event.

The Amsterdam Festival organizers had requested that NEXUS play a piece by John Cage – specifically his 1976 work Branches, a piece composed to be performed on amplified cactuses and a pod rattle (one of Cage’s favorite instruments). The festival staff had coordinated with a local plant store to provide an assortment of beautiful large cactuses for the concert, and the sound crew for the Carré Theatre provided contact mikes to attach to the plants. During the evening performance of the piece, while we were making delicate plucking sounds on the cactus quills, someone in the audience loudly exclaimed “bull shit!” Without any change of attention or focus on what he was playing, Robin Engelman responded in his most powerful voice of authority “No, CACTUS shit!” A review in the newspaper the following day included a transcript of the exchange.

Although John Cage himself was not in attendance at the Holland Festival that year, he did hear John, Robin, Russell and me perform a version of Branches in 1982 at a performance at the Kennedy Center in Washington, D.C. (a concert that included two other Cage works – Third Construction and 16 Dances). Besides the unusual orchestration, Branches also requires that the performers determine in advance various temporal dimensions by chance methods, typical of Cage’s work during the 1960s and 70s. Many “scores” from this period are only one or two pages of handwritten instructions, and the comments are usually terse and often ambiguous. When the four of us decided, as a group, how to toss coins to determine the lengths of various sections in Branches, there was a serious debate over how to interpret Cage’s explanation about the way it should be done. Cage himself wasn’t present during this discussion, and following the performance he let us know that we had chosen an incorrect method. As it turned out, Robin Engelman had argued for the correct approach, but had lost by a vote of three to one.

Cage was insistent that pieces like this not take on any aspects of traditional “performance” – things like formal stage demeanor, predictable musical expression or phrasing, and attempts at making beautiful sounds. For trained musicians, this aspect of Cage’s aesthetic is the most difficult to come to terms with. Very often musicians confronted with performing Cage’s music, especially the graphic scores (like Atlas Eclipticalis, for example), attempt to interpret the notation based on their standard classical music background, and the results can be laughable – both to audiences and to the musicians themselves. I believe that laughter is often a completely natural, if not irrepressible response to the results of indeterminacy in Cage’s pieces when they are realized as he intended – but it is laughter of delight and astonishment. When presented in an earnestly “musical” way, work of this nature becomes comic, and the only possible reaction is embarrassment.

A marvelous example of this kind of situation is found in Cage’s Credo in US (1942) where a classical phonograph recording, or real-time radio broadcast is called for at specified places in the piece, which is otherwise scored for piano and two percussion. I have performed and conducted this work many times, and there has not been one concert ­– or even one rehearsal – where the chance juxtapositions of a classical music radio-broadcast with the composed music has been anything but amazing. On several occasions I could not suppress my own surprise, and nearly laughed out loud during the performance.

Cage himself was a virtuoso in his desired manner of expression. I remember seeing a film of one of his solo performances of Child of Tree (1975). His approach to producing sounds using a table full of assorted plant materials was utterly unaffected and matter-of-fact in gesture, yet completely attentive to each and every sound. The result was mesmerizing.

My experience has been that shows where Cage was involved personally in the production were orders of magnitude more powerful, persuasive and exciting compared to concerts of his music without his presence. He had a way of encouraging performers to listen to every sound – in fact, to perceive every event – with the kind of focused attention he wanted. I recall a rehearsal in Los Angeles in 1987 where he spent quite a bit of time working with one of the performers on achieving the correct approach to running water from a garden hose into a child’s inflatable swimming pool. I experienced a similar challenge myself while working on a production in Toronto. There I was coached for quite some time by Yoshi Oida, a Japanese actor and performance artist, on how to properly drop a single small pebble into a wooden bucket of water.

Cage spent a week at Wesleyan University in 1973 while Russ Hartenberger and I were there studying in the graduate program of the World Music Department. It was the first time I met Cage and the first time I performed one of his pieces with him involved. Cage presented some lectures, including a reading of one of his “mesostic poems”, and directed a performance (I believe it was the premiere) of his work Etcetera (1973). Etcetera is scored for an ensemble of any size (along with a taped recording of outdoor sounds), with written parts provided for strings, winds, six percussionists, two pianists, and requires three conductors. The orchestration also includes parts for large cardboard boxes that are tapped at various points on their surfaces. All of us, including Cage himself, were intrigued with some brand-new boxes that had been obtained for the event. My first reaction was to try to get the most resonant sounds I could, and also apply some of the tabla techniques I was learning at the time. Cage of course was not interested in any of that, and made it clear that he was after a non-resonant sound, and a repetitive, but unordered kind of effect – something like rain drops make on a roof, or a herd of Swiss cows makes walking down an alpine slope. It’s a kind of improvisation, but without “personality” or a traditional sense of virtuosity. Nevertheless, “performing” of this kind is challenging and not nearly as easy as it may seem at first thought. Nature itself is the only great virtuoso, and a performer of Cage’s music, like a Japanese flower arranger, simply tries to emulate it.

The last time I saw John Cage was at the Frankfurt airport in 1992. It was the same afternoon recounted in Russ Hartenberger’s wonderful article “Encounters with John Cage” (Percussive Notes, September, 2012). I was walking along one of the concourses when I noticed several people walking toward me. The central figure was wearing a blue denim jacket and stood out, at least to my eyes, like a Hollywood star. I recognized Cage immediately and walked over to say hello. His group clearly was in a hurry to get to their gate, but he stopped for a moment as I reminded him who I was. His final words to me were “Nice to see you!”