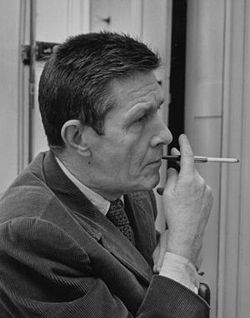 I admit I’m a “newbie” when it comes to John Cage.  I know of the man, of course, but had never really heard his work. I knew about the 4 minutes and 33 seconds of silence;  – I certainly hadn’t heard that! And I’d seen any number of send-ups of “prepared pianos” (a Cage innovation). But I had relegated Cage to some back chamber of my brain, the one labeled “must check out one day – or not.”
Knowing NEXUS has given me an opportunity to actually LISTEN to Cage! He’s really fun! Am I allowed to say that? After all, isn’t Cage all serious philosophy? As it turns out – No!
In 2007, after Cage’s “Dance Music for Elfrid Ide” was rediscovered (it was written in 1940 but got lost in a typical musician’s “pile of music”), NEXUS was asked to give the piece its US premiere at Bard College in New York which houses the John Cage Trust.  The piece is a delight! NEXUS member Garry Kvistad provides a nice description:
“It’s a wonderful piece of music full of African and Latin rhythms, a fun slow movement using toy instruments and a raucous honky tonk finale. Yes, I said John Cage.” (Garry sounds as surprised as I was!)
At Soundstreams’ Cool Drummings ’07, NEXUS performed Cage’s “Third Construction”. It was exhilarating! CBC called it the highlight of the concert. It had people on their feet, and requests came in from presenters asking for an opportunity to have NEXUS perform this amazing work for their audiences. Some of the instruments? A lion’s roar, teponaxtle,  conch shell and cricket caller!
My next “exposure” was Cage’s “Credo in US” (NEXUS at Toronto’s Music Gallery). This piece uses a radio tuned to a local classical station! Thus, each performance is unique, and the “soundbytes” (some musical, some spoken), were so recognizable yet so out-of-context (or “re-contextualized”, if you will) that the whole audience was chuckling. At Cool Drummings ’08, NEXUS performed Cage’s “Amores” punctuated by Adrienne Clarkson’s readings of Cage’s own words – witty, wry, and yes sometimes weird, but Wow!
Audience members commented that it is so very rare to have a chance to hear Cage. I know why. It’s because people have stuck him into that back room of their brain, like I did. His stuff is great! I hope you have a chance to check it out!  As well as performances, NEXUS offers an interactive lecture/workshop on the early percussion music of John Cage, led by Robin Engelman. (Oh, and BTW, Cage was also a mycologist – collector of & expert on mushrooms. He actually won an Italian quiz show talking about fungi! Read more here.)