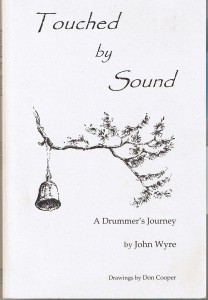 I’ve been reading “Touched by Sound” by John Wyre,  a founding member of NEXUS until his retirement in 2002 when he moved to St John’s, Newfoundland. I knew John for many years, as I worked with NEXUS in the 1980s and helped produce his tremendous World Drums festivals. And I had the great opportunity of joining the Australia ’88 World Drums tour as company manager.

Outside of business, John and his wife Jean invited my husband Harvey and me to their beloved Bellwood in Norland, Ontario. Here was their unusual geodesic home; the mossy rock walls that John built meditatively, stone by stone; the meandering “dry ditch”, a dry streambed they had created and filled with smooth river stones that would create a rippling music in the spring runoff. In the trees hung lovely sounds: bells, of all sizes and shapes. And in the midst of the quiet, there was always laughter. During one evening visit, shortly after they had added a handsome house addition, there was much puzzlement – and laughter – as we discovered the new bathroom’s toilet was full of steaming hot water. It had been plumbed to the wrong water line! “It’s a challenge we must rise to,” nodded John in his best contemplative manner.

It’s always interesting to see where life-paths crossed before you knew someone personally. John tells in his book of “camping” in the lovely little Anglican church in Niagara-on-the-Lake in 1972 and reaching an epiphany there with the insightful help of the Rev. Hugh MacLean. A year later, I and my then-husband Howard Cable moved into a small cottage a few steps from that church, and some of my sharpest and most appreciative memories are of the broad topics of the mind-opening sermons of Rev. Hugh.

John and Jean were always generous with the fruits of their experience. When Harvey and I said we’d like a little piece of land, they introduced us to their real estate friend Elgin who first had shown them Bellwood. Elgin knew just the place for us, and we arranged to meet on an isolated country roadside. Elgin showed up in a tweed jacket and tie, slacks and dress shoes – and proceeded to lead us into pathless woods, over ridges, and through soggy marshland, shoes be damned. I thought to myself, “This is John’s kind of guy!”  And, yes, we bought the land.

If you want to read more about John Wyre and his unique “take” on woods, world travel, music, and NEXUS, you can find his book here. Bill Cahn’s interview of John is here. John’s “World Drums” was documented in a 1987 film of the same name available from the National Film Board (NFB 113C-0187-117). The National Film Board also has a 1991 half-hour documentary on John called “Drawing On Sound”.  And Barry Dove and the Percussive Arts Society World Music Committee produced a DVD tribute to John entitled “I’ll Be With You In Apple Blossoms”. (If you would like a copy of this memorial DVD, drop a line to us here at the website. The DVD is free but we would ask you to cover any postage.)

BTW, for any Harry Potter fans out there, an ancient farming term for a dry ditch was “Quidditch”. I wish John was around today. He’d love that bit of trivia. And would no doubt have dubbed his pretty streambed “The Quidditch”!