I thoroughly enjoyed reading Michael Rosen’s article on “Ionisation” in the July 2015 issue of PERCUSSIVE NOTES.  After reading it, the memory banks in my brain started throwing out images of the past, along with an impulse to write about two of these images under the assumption that they might in some way be of interest.

After having performed virtually all of the parts in “Ionization” over the years, I was fortunate to be able to perform it five times under Pierre Boulez with the Chicago Symphony in 2009.  For those performances I played Part #12 – Tambour de Basque, Enclumes (la premiere plus aigue), Grand Tam-tam.  For the anvils (Enclumes) I used two I-beam cross sections pitched about a third apart, played with the ball ends of two small ball peen hammers. 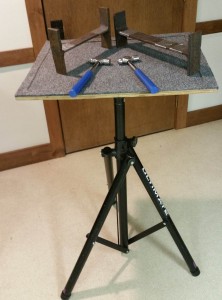 Enclumes (anvils) used in “Ionisation”:
two I-beam cross sections pitched about a third apart, played with the ball ends of two small ball peen hammers. Duct tape was wrapped around each I-beam to limit the metallic ringing and shorten the duration of the sound.

In one of the rehearsals prior to the first performance Boulez stopped the ensemble and asked to hear me play one of the anvil passages alone, which I did.  He then asked me to play the high-pitched anvil.  His comment was that the higher-pitched anvil should play the notes on the lower line. Though I was caught a bit incredulous by this, I (fortunately) said nothing, and as soon as I regained my senses in a few seconds –  the conductor is ALWAYS right . . . especially Pierre Boulez –  I reversed the position of the anvils.  Boulez nodded ‘OK’ and from that moment on – through the rehearsals and the five concerts – I played the anvil part as requested.  When discussing this with the others in the ensemble afterwards, the only responses were shrugging shoulders.  Of course, in the grand scheme of things, it doesn’t really matter which of the two anvils plays on the higher line in the score; the piece works just fine either way.  But . . . hmmm . . . how interesting!

On a related note, I performed with a chamber ensemble in 1963 at the University of Pennsylvania in Philadelphia with Ralph Shapey conducting and Varese standing right over my shoulder in the dress rehearsal for a performance of “Offrandes,” a lovely work for soprano and chamber ensemble. The dress rehearsal was on November 21, 1963 – the day before the concert.  On the following day, of course, the Kennedy assassination happened, and everything everywhere was cancelled.  Though the concert was eventually rescheduled, I never saw Varese again, but I’ll never forget the scruffy-looking composer with the extremely bushy eyebrows who stood watching over our shoulders throughout the rehearsal insisting that the quintuplets be absolutely precise – 1,2,3,4,5 and not 1,2-1,2,3 or 1,2,3-1,2.